Home F365 Features Prick of the Week No. 9: Ademola Lookman and the ‘Panenka’ 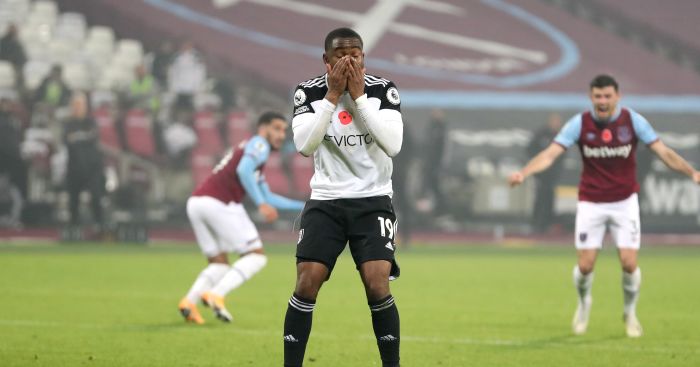 A more light-hearted Prick of the Week this time as we eschew serious issues and genuine bellends to instead have a good old-fashioned chuckle at a professional footballer making a right bollocks of things.

Decided that a penalty deep into injury time to potentially rescue a precious away point for the worst team in the Premier League was the very ideal moment to find out whether he can do a Panenka or not.

SPOILER: Turns out he can’t.

Now. There’s lots to talk about here. One, and this is what those looking to defend or at least mitigate, will tell you: at the most basic level, no missed penalty is any ‘worse’ than any other missed penalty. The net result is the same. The Panenka is a mischievous and impudent penalty technique, but it exists for a reason: it requires high levels of skill to pull it off, but has a very high success rate when the execution is sound. It is a valid option.

But what those people overlook is that a bollocksed Panenka is very, very funny. A bollocksed Panenka from the final kick of the game when you’re playing for Fulham is even funnier. The risk-reward goes beyond the mere binary “Goal” or “No Goal” of a penalty. Had Lookman scored, the praise would have been far greater than it would had he just Pressmaned it down the middle at 100mph like he really should have done, and so the inverse is also true. The Panenka can make you look unbelievably cool, or unbelievably stupid.

The second thing is, as we’ve mentioned, that the Panenka has a high difficulty tariff. So however sensible and valid a penalty option it may be, the higher the pressure, the lower percentage it becomes. We’ll say it again: just twat it down the middle, mate. Not as cool, definitely, but same principle and a far simpler, more reliable technique in that moment.

The third thing, and this is more of a semantic debate. At what point does a Panenka stop actually being a Panenka at all? If you, for instance, attempt to twist a full-back’s blood and create space by elegantly flicking the ball back between your own legs having faked to cross but instead you trip over the ball, land on your bottom and start crying, then that is not a Cruyff Turn. It’s just a mess. Even calling it a “Failed Panenka” implies a connection with the original. We propose that such efforts in future don’t get unwarranted association with the coolness of successful Panenkas and are instead known as Lookmans.

That said, we do quite like the BBC’s description of it as a “Panenka-style spot-kick” which has a pleasant air of mockery without being so vulgar as, say, calling Lookman a prick or something, while also hinting at the idea that in fact a dinked penalty over a flailing, diving keeper can only actually be called a Panenka if it comes from Prague.

None. Quite literally. This is the first penalty Ademola Lookman has taken in professional football. Which either makes all previous points about the difficulty and risk of the Panenka apply even more so, or elevates what he did to such high art that any criticism of it at all from mere mortals is invalid.

Fulham are going to get relegated by about 25 points anyway. Sure, a point at West Ham would have been nice but it’s not going to matter much in the grand scheme of things really. Why not just try a Panenka with your first ever professional penalty deep into injury time? What’s the harm? None. Maybe he’s not even a prick at all. But it’s too late to think of something else to write about now.

Fulham get relegated by about 25 points. Lookman returns to RB Leipzig with three years left on his contract and having done precious little to improve his chances of a look(man) in there so, one imagines, gets another loan move back to England to join whichever team has surprised themselves by accidentally getting promoted from the Championship. And lo, the circle continues to turn.

Getting Spurs top of the Premier League, even for only an hour or two, is one thing. Having them second with the joint-best defensive record in the league is quite another. Call it prickery or witchcraft, either way it’s just not right. Mourinho’s side have conceded just one Premier League goal in three games since that West Ham nonsense, which is classic Mourinho in a way but is also classic Anyone Happening To Play Three Consecutive Games Against Burnley, Brighton And West Brom.

Ademola lookman prick of the week