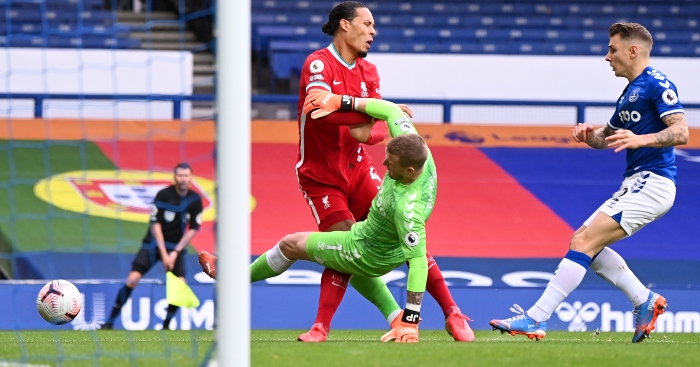 This week everyone is a prick, but especially Jordan Pickford. With hindsight, there was never any chance a Merseyside derby of such importance could produce any other outcome.

Deep breath…Jordan Pickford, Richarlison, twitter dot com, Liverpool fans (yes, yes, #NotAllLiverpoolFans), Piers Morgan, Graeme Souness, Mark Bosnich and literally anyone else who committed a ridiculously terrible tackle during Saturday’s Merseyside derby (probably got them covered to be fair) or espoused a ridiculous opinion in the aftermath (not remotely covered).

What have they done?

You know what they’ve done. Jordan Pickford put Virgil van Dijk out for the season with a tackle of such wild incompetence and violence that everyone else decided to lose their mind every bit as much as he had.

This was exacerbated by the VAR decision not to consider whether this merited a red card because of a previous offside, and then sent through the stratosphere when the severity of VVD’s injury came to light.

Graeme Souness – Graeme Souness! – described it as “an assault”. Piers Morgan (I know, I know) trotted out the stupidest opinion anyone can express about anything that happens in sport, namely that “if you did that on the street you’d be arrested for assault!” Well… yes. Most tackles would constitute assault if you committed them at a bus stop instead of on a football pitch. Barge a pensioner over on a zebra crossing and your claims that it was shoulder-to-shoulder will quite rightly fall on deaf ears. Piers, of course, knows all this. I mean, his favourite sport is cricket, a game where hurling a lethal weapon at a person’s head at 90mph from 20 yards is actively encouraged.

These days, if you two-foot a Liverpool centre-back in the street whilst in full Everton kit, you’ll be arrested and thrown in jail. https://t.co/S48hMhHTH4

As for Souness’ view, it’s just fundamentally unhelpful. Pickford has been a prick, a Prickford if you will, but this was a failure of decision-making and technique and mentality as a footballer, not a failure as a human being. The propensity for catastrophically poor decision-making from England’s No. 1 has quite literally been one of the main talking points in football in this country for the last year or two. It didn’t come out of nowhere, but it didn’t come from Pickford being a flawed human being but from him being a flawed footballer.

Right, on to Richarlison. Stupid, dangerous tackle, quite rightly red-carded. That would be that, except he couldn’t even manage to get the standard non-apology statement quite right and then claimed there was nothing much wrong with the challenge anyway in a tweet instantly doomed to take its place in 723 stories featuring the words ‘swiftly deleted’.

That further enraged the already febrile Liverpool support who had responded to events thus far – Pickford’s tackle, Richarlison’s tackle, a VAR-denied late winner – with their usual quiet dignity, but could stand it no more.

Cue the second silliest opinion in sport: that a player who injures another player should be banned for as long as the injured player is ruled out. A triumph of emotion over logic and in absolutely no way open to massively obvious and widespread abuse without even mentioning the game-ruining extra thing for defenders to worry about every time they consider making a challenge.

Nothing that anyone involved has done here is without precedent. It’s just the perfect storm of it all happening at once during and after the most important Merseyside derby in Premier League history.

It all happened during and after the most important Merseyside derby in Premier League history.

For most involved, very little. For Richarlison, a gentle nudge from his team to maybe just give social media a miss for a bit after being sent off in the last minute of the most important Merseyside derby in Premier League history. For Piers Morgan, literally the same as every other day. For Souness, nothing at all. For Liverpool fans, yet more evidence that they are special and different and all other supporters just don’t understand.

For Jordan Pickford, though, possibly something more significant than a red card or even the ludicrous injury-matched ban. It’s starting to feel inexorable; we’ve been here so many times with England goalkeepers. When this stuff reaches a critical mass it’s almost impossible to turn it around.

He could be Everton’s No. 2 before long, and on the England front should count himself lucky that Nick Pope’s heroics for Burnley against West Brom happened on PPV and are therefore known only to about 43 people including those who played in the game.

He brought Gareth Bale on. Silly Jose. Everyone thought it was a terrible idea, but he did it anyway.

Sergio Aguero’s casual sexism and Pep Guardiola’s sniffy dismissal of it as even worth discussing; the fact the stupid handball law is now also impacting the stupid offside law; defenders.

Jordan Pickford prick of the week