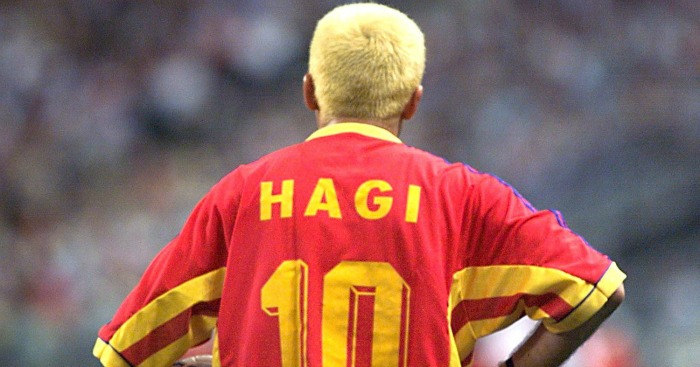 Revealing your least favourite piece of football writing is a dangerous business.  Confessing the things you love is fine, because deep down everyone is a compliment fisherman or fisherwoman. ‘Nice things make people feel nice’ isn’t exactly breaking news. Doing the opposite is far less palatable.

So I’m sorry to the author of this piece from 2008, I really am, but it’s utter hogwash. Football’s war between eyes and numbers may be dramatically overstated (hands up if you’re guilty) and the growing obsession with statistics and data grossly misjudged, but assessing Eric Cantona on his goals-per-game record should make anyone weep.

It’s not a lonely argument, either. As the financial rewards for success continue to grow, players are increasingly judged by their quantifiable contribution rather than the aesthetic pleasure they provide. Football moves closer to business and further from art, despite the two not being mutually exclusive.

It comes as no surprise to hear that Gheorghe Hagi mourns such a development. “Today, you seem to be considered good only if you can run fast, or are physically strong,” he said in an interview with World Soccer Magazine in 2001. “What about individual skills? It’s now only about results.”

Hagi was, like Cantona, occasionally unreliable and inconsistent, and regularly volatile. The two big club moves of his career, to Real Madrid and Barcelona, both ended in relative failure. He was as likely to make a manager tear out his hair as jump for joy.

Hagi also gained a reputation for losing his temper on the biggest stage. He was sent off in the UEFA Cup final in 2000, banned for six weeks for attacking a referee and also dismissed on his final appearance for Romania. Six years before Zinedine Zidane exited the international game in disgrace against Italy, Hagi started the trend. “I know I have a strong personality,” Hagi says, earning maximum points for understatement.

Yet who needs perfection? Hagi was also one of the most watchable players of the last 30 years. Rather than detract from his reputation, Hagi’s volatility helped to sculpt it.

“Imperfection is beauty, madness is genius and it’s better to be absolutely ridiculous than absolutely boring.” Marilyn Monroe is an unlikely football pundit, but she nailed it on Hagi. When it comes to reaping enjoyment from an individual player, unpredictability is king.

Hagi was a magnificent attacking midfielder. His vision and passing ability were almost unrivalled in world football in the 1980s and 90s, while his goal record was the envy of most strikers.

‘The Maradona of the Carpathians’ was a fitting nickname. There is something incredibly endearing about watching a short player refuse to be shrugged off the ball. Hagi was like a pocket pitbull, a footballer who could surely have wrestled professionally had money ever got tight. As a hero in his homeland, it never did.

Like so many of football’s greatest mavericks, Hagi’s upbringing was hard. His Macedonian family were forced to emigrate to Romania when he was a child, and his first memories of football were playing with a cloth ball made for him by his grandmother. The next step up was a ball manufactured from horsehair and a cleaned-out pig’s bladder, given to him by his grandfather.

Hagi’s big break came in controversial circumstances. Already a star aged 20 with Sportul Studentesc, Hagi was loaned to Steaua Bucharest at the behest of Valentin Ceaucescu, son of the Romanian dictator Nicolae, for the European Super Cup final in 1987. Hagi scored the winner against Dynamo Kiev and never returned to Sportul. They received no payment for the deal. Complaining was not advised.

The assassination of Ceaucescu in 1989 allowed the shadow of politics to be lifted from Hagi’s career. Until that point, Romanian players had been banned from leaving the country. The player had his own tongue-in-cheek take on the end of a brutal dictatorship: “I joked with my friends that the revolution was carried out just for me, so my whole career wouldn’t be spoiled.”

If Hagi’s failures in Spain add a tinge of disappointment to his career, they are at least easily explained. Injured for long periods of his time in Barcelona, Hagi was a player who suited being the centre of attention, the big fish in small pond. His goalscoring record at Steaua and Galatasaray – over an extended period – was astonishing, but it was at international level where Hagi most impressed. During the 1994 World Cup, he took a nation to the verge of the World Cup semi-finals.

It’s easy to forget how much pressure was on Hagi going into that tournament. Having been sold by Real Madrid to Brescia, where he was managed by Romanian Mircea Lucescu, his career was in danger of petering out. “Hagi could have been the best player in the world after Maradona,” Lucescu said before USA ’94. “But he is a great player without a work ethic. This World Cup is the last chance for him to be seen as a great player. We are trying to make him understand that.”

It’s fair to say Hagi took the advice on board. Named in the team of the tournament, Hagi was magnificent as Romania qualified from their group at the expense of hosts USA and Colombia, and knocked out highly fancied Argentina in the last 16. They were finally eliminated by Sweden after a late extra-time equaliser and defeat on penalties.

Although Hagi’s goal from 40 yards against Colombia is remembered more, the moments that perhaps best capture his abilty came in the victory over Argentina. In the build-up to Romania’s second goal, Hagi played two sumptuous passes in ten seconds. The first took three players out of the game, while the second did exactly the same but also set up the goal, the ball landing perfectly at the feet of Ilie Dumitrescu for him to finish past Luis Islas. That second pass has an almost hypnotic quality, imploring you to watch it a fifth, sixth and seventh time. Hagi’s execution is surpassed only by his vision. Inch-perfect is used liberally as a compliment; here it is almost an insult. Make that millimetre-perfect. Hagi went on to score the winner, of course.

“I’ve been told that the victory over Argentina was like a second Romanian revolution following the first one which toppled Ceausescu,” Hagi famously said after the match. “We’re talking about the biggest win in the history of Romanian football.”

The most extraordinary aspect of Hagi’s career was its longevity. His first Romanian Player of the Year award came in 1985 and his last in 2000, and he scored 48 goals in his final three seasons at Galatasaray from the age of 34 onwards. As former French player Luis Fernandez said: “Hagi is like wine. The older he gets, the better he is.”

The sour taste with many flawed geniuses is an arrogance that bleeds into obnoxiousness, but Hagi is able to walk that line. When asked about the love he receives from an adoring Romanian public, his reply indicated an often-overlooked humility. “I can not say anything about that,” Hagi said. “I am not the person to confirm that. I love everyone. And more important than love, I respect everyone. As for them to me, you’ll have to ask them. But at least I know my wife loves me, that’s enough for me.”

“Find a team that believes in you,” is Hagi’s advice for the next generation, which includes his son Ianis (contracted to Fiorentina). “A team that gives you a regular place in the side, that helps you grow and keeps you on an even keel. That’s the luck that I had in playing for Steaua – a great club and a great team. Nothing else matters.”

Now a coach at Viitorul Constanta after several ineffectual stints elsewhere, Hagi can never hope to replicate his playing success. That doesn’t matter; his legacy in Romania is as permanent as the Carpathian mountains after which he is nicknamed. To Galatasaray supporters he is ‘the Commander’; to Romanians, simply Regele – The King.