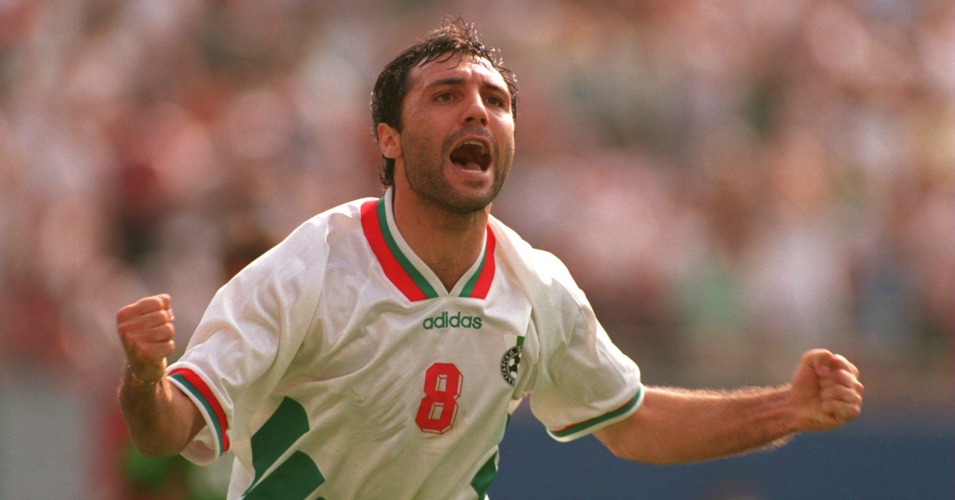 If we can judge a man by his nicknames, Hristo Stoichkov’s monikers leave nothing to the imagination. Known as ‘The Dagger’ for most of his career, he took a brief hiatus during his five-year spell at Barcelona; Spanish fans instead labelled Stoichkov ‘El Pistolero’ – the gunslinger.

If the violent imagery is obvious, the cap probably fits. Stoichkov became affectionately known as the ‘Boss of the Dream Team’ during his time at the Camp Nou, and that title works in more ways than one. With the chest hair and gold chain visible above his V-neck shirt and a permanent glint in his eye, Stoichkov had all the presence of a Mafia boss.

He demanded a similar respect from his peers. “There are only two Christs; one plays for Barcelona, the other is in heaven,” he said when collecting his Ballon D’Or in 1994. The only thing that matched his ego and volatility was his talent and success.

For a child growing up, it was a heady combination. Stoichkov was the bad boy it was okay to love. He had a swagger like no other player of his time, the artist with the rock star image and the temper of a grumpy rhino. “Sometimes Stoichkov sparks controversy around himself,” said former Bulgaria team-mate Latchezar Tanev. “But he is a football genius and it is normal for a genius to be a little crazy.” Quite.

Stoichkov was a hard man and a rogue, of that there was no doubt. He was given a lifetime ban in 1985 for fighting in a Bulgarian league game, reduced to a month on appeal, and was banned during his first season at Barcelona for standing on the foot of a referee.

When the Bulgarian did cross the line, it was usually through his desperation to succeed. Growing up in a poor family in the village of Yasno Pole on the outskirts of Plovdiv, football was his escape from poverty. “We dreamed of football fame as kids,” he says, “but none of us thought we would make it.”

If becoming a footballer was Stoichkov’s own personal nirvana, that’s probably where the links with the serenity of Buddhism end. “Football is simple,” he once said. “You just need to have the right mentality, fighting in every game, in every practice and for every ball.” Stoichkov was like a snarling dog with his favourite toy; woe betide anyone who came between him and scoring goals.

There is a quote from former Bulgaria strike partner Nasko Sirakov which epitomises Stoichkov’s determination and passion perfectly. “When people say that a man is as big as his dreams, that fully applies to him,” Sirakov said. “He prepared for matches the way other people prepare for a wedding.”

It may be a weak defence for some of his behaviour, but there was something to admire in Stoichkov’s overwhelming emotion. None of his temper was an affectation, merely because he wanted to win so desperately. Football, fate or some other person had got the better of him. He wasn’t prepared for it to happen twice.

If Stoichkov developed at CSKA Sofia, he blossomed in Barcelona. Having scored twice against Johan Cruyff’s side while playing for CSKA, the Dutchman signed him in the summer of 1990 after he had won the European Golden Shoe. It might as well have been Cinderella’s glass slipper; the Plovdiv boy was to play for the biggest club in the world.

Alongside Brazilian Romario, Stoichkov led Barcelona to four straight La Liga titles, and won the European Cup in 1992, named second in World Player of the Year after that season. This was the perfect team, comprised of vastly different component parts.

However, if 1992 was his greatest year at club level, 1994 was Stoichkov’s annus mirabilis. Having ended a remarkable run of 206 club goals in seven seasons, he went to the 1994 World Cup with Bulgaria. His American dream would come true.

Having lost 3-0 in their opening game to Nigeria and with Argentina still to play, Bulgaria’s hopes looked slim. Stoichkov somehow dragged them through the group stage, scoring twice against Greece and once against Argentina. He then scored against Mexico in the last-16 and Germany in the quarter-finals. Both of the finalists from 1990 had been beaten in the space of a fortnight.

It was an extraordinary achievement for a country who had never won a World Cup match prior to that tournament. Stoichkov was awarded the Golden Boot, named alongside club team-mate Romario in the team of the tournament, and later picked up the Ballon D’Or. Back in Bulgaria, the village of Yasno Pole renamed itself Stoichkova in his honour. “Now I know for sure that God is Bulgarian,” is Stoichkov’s famous quote from that tournament.

Now thought of as a striker, the Bulgarian was actually more comfortable in a slightly reserved role – in name only – picking up the ball deep and out wide before surging forward. He had an explosive turn of pace and supreme skill at speed. Many modern players sprint forward before slowing down to pass the ball or dribble past an opponent, but Stoichkov did everything at full pelt. With his short, stocky frame, it looked as if he was being filmed at 1.5x speed.

Stoichkov also had a fantastic touch, confident using every part of his boot to finish chances. The number of chips he scored indicate not only that ability to think at speed but also to carry out his next move before defenders or goalkeepers had even considered them a possibility. That afforded a powerful striker a crucial element of surprise.

The best way to perceive this extraordinary range of Stoichkov’s finishing is by watching the first two goals in this video clip. Both are very similar moves, the ball across the box for the striker running through the middle at pace. The first time Stoichkov goes for power, striking the ball with all his might into the top of the net. For the second, he casually slides it into the corner with his instep. How can you defend against that?

There was a monumental gap between Stoichkov’s tempestuous  nature and his calmness in front of goal. Look at that image above; both feet off the ground, two feet in the air and yet with perfect, steely focus on the ball and its path towards goal. That combination of exterior volatility and momentary inner peace is one the most crucial ingredients in football greatness.

Despite his phenomenal natural talent, Stoichkov only achieved success by fighting for the right. Some of football’s best play as if they are amorphous, far removed from the traditional cliched image of an athlete; Stoichkov was the opposite. It was as if the the machine had been made without a cover for the engine, constantly possible to see the coal being shovelled into the furnace. Some glide across the pitch; Stoichkov left his mark.

“I used to say he was nurtured with an evil milk,” Cruyff said. “He had the inner strength and will to say: ‘I will go one step further than the rest of us’. He could give more than 100%. Usually 100% is the maximum. But he somehow gave more.”

Former Barcelona team-mate Txiki Begiristain gets the final word on Stoichkov. “There are different types of major competitors in the history of football, and each one has left his own trace. But such a talent with such a character has never been gathered in one.”