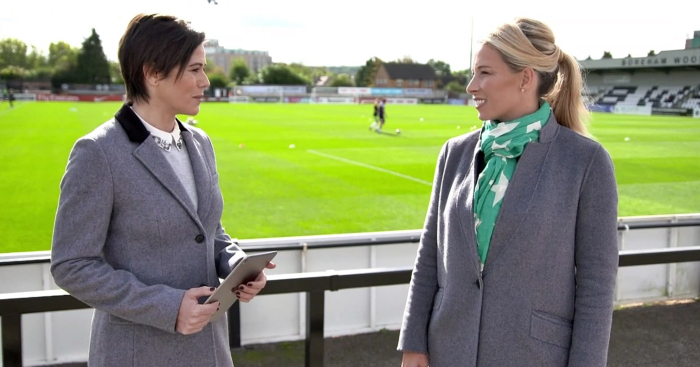 Johnny’s Programme of the Week is bound to get the it’s-political-correctness-gone-mad crowd frothing at the mouth. Women? Playing football? Whatever next?

That’ll be The Women’s Football Show, then.

What’s the History?
In the first years of the 20th century, football played by women used to be popular. There were over 150 women’s teams in England, sometimes drawing large crowds, with a 1920 Boxing Day game at Goodison Park attracting 53,000.

And that’s why the FA banned it from being played at all FA grounds for 50 years from 1921 until 1971. While games did still happen occasionally, it cut the nascent sport off, just as it was being properly established. The long-term effects of this ban were so profound it built a cultural mountain that we’re still trying to climb over today.

The ban was rooted in good old-fashioned sexist nonsense of course, not least from physicians such as Dr Mary Scharlieb of Harley Street, who declared it was the “most unsuitable game, too much for a woman’s physical frame”. Try telling that to Abby Wambach, Mary.

By the time the FA decided in their good grace and wisdom to ‘allow’ women to play football again, it had become established as a game played only by men. The concept that playing football wasn’t ‘lady like’ had become deeply ingrained, the idea that women were somehow innately rubbish at kicking a ball now the default opinion. Even now, you’ll hear this said, so DNA deep has this bigotry burrowed.

And now in 2018, football played by women (I am hesitant to call it women’s football because it implies it is a different game to the football played by men, when it is the exact same game) has never been more prominent on TV and radio. Big international games often attract the sort of crowds that happened in the early days. But there are issues with attendances at some WSL games and there are still many battles to fight – primarily the obsession some have of judging it against football played by men, rather than just taking it for what it is.

But regardless of any lingering reactionary attitudes, the fact that programmes like the Women’s Football Show exist is a huge victory in itself and will only have a positive effect on the future of the game. Showcasing women being good at and enjoying the game is inspiring. It implicitly states: ‘You can do this. It’s normal. It’s fun. It’s not weird to run around and get sweaty.’

That’s not just important for football but for the socio-political well-being of society.

The show broadcasts on Sundays and is on BBC iPlayer for a month. While over the years there have been programmes on TV showing high-profile games, especially World Cups and such, there wasn’t a regular league programme, week in week out, which could reliably form part of the warp and weft of our football lives. Regularity allows routines to be established and it pushes at the door marked ‘normal’ rather than one marked ‘special occasion’.

And let’s be clear, the WFS is a much-needed programme because viewing figures on TV are rising and women’s participation in the game is growing all the time. Last year UEFA produced some incredible numbers that showed this:

1921 has never seemed further away.

This Week’s Programme
What I like about the WFS is that it is just a regular football highlights show which bring you up to date with events and shows you the best bits of games.

We start with a simple opening sequence which features headshots of some of the major players against a hard riffing rock soundtrack. This is a good idea because it’s important to both build the profile of the stars and get the newer people in the audience familiar with them. It also allows them to be seen as iconic modern footballers. It takes them seriously and being taken seriously has been an issue for so long.

It’s presented by Dunkeld and Birnam’s finest St Johnstone supporter, Eilidh Barbour, from the dugout at Everton’s ground. In fact the whole show is filmed on location. There isn’t any studio work. The effect of this is to give the coverage a sense of place and time. It feels part of the grassroots, part of the action, in the same way that National League coverage does, and shares a lot of that humble tone.

“So much to get through…so let’s get going,” says Eilidh as we jump into a short ‘Coming Up’ preview package, then Jeanette Kwakye does the voiceover for the clips of some of the midweek goals. I hope I’ve got her name correct as it’s not one I was familiar with and the programme doesn’t have any end credits to confirm who did what, or at least it doesn’t on the iPlayer. This is a mistake. Those prominently or importantly involved in making a programme should be publicly credited for their work and it feels disrespectful not to do so.

Georgia Stanway’s strike for Manchester City from 25 yards was a highlight of this package. Eilidh then talks to Rachel Brown-Finnis who is on the pitch and is wearing a big furry sleeveless jacket that makes it look like she’s being mugged by a huge rabbit. They talk about the day’s fixtures and Arsenal’s great 12-goal start at the top of the league. The table pops up at the bottom right-hand of the screen to remind us of the listings before the day’s games kick off.

Immediately I notice that brilliantly, the BBC do not use the ‘ladies’ or ‘women’ tags and refer to them simply as Arsenal, Chelsea, Brighton etc. That’s great progress.

There’s highlights of the Everton v Chelsea game up first, with Robyn Cowen doing the commentary and Katie Chapman riding shotgun. The highlights last about four minutes; the game ends in a goalless draw. Rachel and Eilidh do a post-match interview with Everton captain Gabby George, after which they look at Chelsea keeper Carly Telford’s performance, which included some great saves and one massive rick when she nearly let the ball go through her hands, scooping it off the line just in time.

Jeanette returns to talk us over the Manchester City game against Bristol which finishes 2-2. City skipper Steph Houghton scored a brilliant gpa; from 20 yards to equalise in the last minute. A great way to end a terrible week for her.

The Arsenal v West Ham game highlights come next, Kim Little’s 20-yard strike into the corner the standout goal in a 4-3 cracker.

The highlights are followed by a discussion of the games, still on the pitch, between Barbour and Brown-Finnis.

The Liverpool game is up next. As anyone who follows the game knows, Liverpool have had managerial problems with Neil Redfearn resigning and Chris Kirkland being in temporary charge. But he is absent for this game, meaning Vicky Jepson takes charge.

Adam Summerton and Lucy Ward handle the microphone work for Brighton v Liverpool. After winning 1-0 there’s an interview with Jepson, who looks understandably delighted. Noticeably, throughout all the interviews in the programme, there is no overbearing ego or self-regard from the players and managers. There’s an honesty, sincerity and humanity to it all. Everyone is bright-eyed and enthusiastic. There’s no moody posing or hands over mouths and as such it just feels very positive and inclusive.

The next feature is about Reading, as interviews with striker Lauren Bruton, manager Kelly Chambers and midfielder Remi Allen are interspersed with footage of them training, followed by brief highlights of their game against Birmingham.

We end the show with the updated league table and a chat with Emma Hayes, Chelsea manager, and a quick summation of the results in the second tier, topped by newly-formed Manchester United.

And that’s us outta here. We play out with the sort of fuzzy, bangin’ choon that would appear to be the aural expression of a headache. As I say, there are no credits at all. Not even a final brief screen flash. That seems odd but perhaps it is common these days and I’ve just not noticed.

It’s a solid show, very enjoyable and lean. In covering all the main bases, it really helps educate those of us who are still getting our knowledge of the WSL up to speed.

The chemistry between Rachel FB and Eilidh B is relaxed and completely lacking in incoherent waffle. The whole thing is a real pleasure and, unlike some programmes, doesn’t indulge in mindless banalities or ‘witty’ banter. It feels friendly and accessible and it is a must-see show to keep yourself up to date with all things WSL.

One Thing That Someone Said
I knew this wouldn’t attract a lot of contributions because it probably isn’t yet of interest to a large number of people – which does not invalidate the show in any way.

‘A well put together show for those of us who love and are passionate about the women’s game. Would love it to be on earlier, but it is a very good show.’

Does it have a Future?
It’s not just that it has a future; this looks like the actual future to me. While it may not be broadcast to huge numbers, that doesn’t matter. This is surely something the BBC should be committed to for the long-term. It is very much in their remit to bring to the market that which might not get made by the commercial sector. It can’t be expensive to make and it is highly valued by its audience. The real impact may not be properly felt for a generation, but the fact that the WSL highlights are being broadcast every season will mean kids who are seven or eight now, will reach their 20s watching women playing football as a totally normal part of life and they will look at us in astonishment when we tell them that there were once people who sneered at such a thing.

The BBC has been a supporter of the women’s game for some time now. It has helped lead the way in utilising women as pundits, as well as presenters. The now-rapid expansion of articulate women in football broadcasting roles has made it almost unacceptable for any programme not to have female contribution. How committed to the cause they all are and how much of it is fear of looking bad doesn’t matter. Change is with us, here and now and we are all better for it.

As such, when we watch the Women’s Football Show, we’re watching football, yes, but we’re also watching a revolution unfolding.