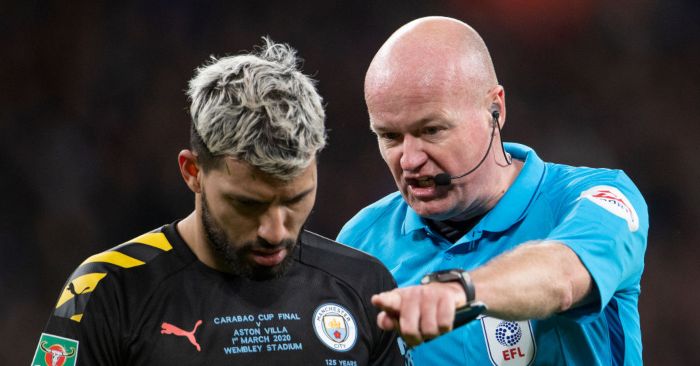 ‘Project Restart’ has shown the ugliest side of football: that players really are commodities and nothing more.

Sergio Aguero is “scared”, Glenn Murray has described the situation as “farcical” and in an interview with The Athletic, Jobi McAnuff has admitted to finding football’s proposed return “incomprehensible”.

It’s telling that it’s taken so long to reach this point. The Premier League has been sending its test balloons out into the world, thinking out loud and speaking anonymously in the media for weeks, but only now are the practicalities coming into focus and the flawed logistics being laid bare.

Understandably so, because until now the solutions have been too theoretical to be worth examination. When Premier League chairmen were floating the idea of playing on the flattest uplands of the moon or an island of cockleshells off the cost of China, everyone could just afford to roll their eyes and chuckle.

But now that a plausible solution is actually in play – now that Project Restart is actually a thing – flippancy is a luxury we can no longer afford. Now, the human concerns are more than hypothetical and what the players say really has to matter.

“Sometimes people forget that (footballers) are normal in the sense that we’ve all got families, some of us have vulnerable adults.”

He’s right; that’s definitely true. But perhaps the people most guilty of making that mistake are those actually inside the game; the people who own and run the clubs, and who have been debating the sport’s future by conference call for the last month.

Aguero has been quoted as saying that “most” Premier League players are afraid of football’s return. That shouldn’t be taken too literally, but neither should it be dismissed. No, Aguero probably hasn’t strawpolled 51% of his colleagues, but he will have had conversations with teammates and with his fellow Argentinians dotted around the country, and what he says will represent some kind of consensus. It hasn’t come from nowhere.

What it implies is that those players haven’t had the opportunity to express their concerns – or that if they have, then they either haven’t been listened to properly or their fears haven’t been allayed. It’s difficult to think of a more disparate trio than Aguero, Murray and McAnuff, yet they’re all expressing the same sentiment.

As are others. Various media outlets this week have carried source-based reports which express concerns about quarantining, long stays in hotels, and months spent away from partners, children and – in a few cases – elderly relatives.

The more you think about that, the more troubling it seems and the more unpleasant the attitude it suggests. Very obviously, this point has been reached without due care for the consequences faced by those who will be tasked with completing the season.

Which isn’t to say that it’s unreasonable just to be thinking of football at the moment. It’s certainly not right to be prioritising sport above the more obvious, pressing concerns that the world has and no, it definitely doesn’t matter in relative terms. But it is not a third rail – just by talking about football or hoping that it returns sooner rather than later, someone isn’t guilty of being insensitive.

Mediawatch special: The Sun, the Premier League and Chernobyl

That’s the issue with the rather performative way in which these discussions are shut down. People are getting sick. They are dying. Many are already dead. In addition to which, industries are suffering and jobs are being lost. But the argument in some quarters appears to be that those can be the only topics of conversation – that we must all sit in our flats and houses, dwelling on the risks of infection, unemployment or bankruptcy.

How can you talk about something like sport right now?

Well, because there isn’t anything else to talk about. And because it’s habit and, in many cases, livelihoods. If Premier League executives aren’t exploring the return of the Premier League, what are they doing? Everything – everyone – can’t just pause.

Stop loving your wife. Stop enjoying your favourite foods. Stop thinking about the things in the world that you enjoy. Consider only mortality and morality. It’s not very realistic, is it?

Landlords are still collecting rent, governments still want their taxes, and the few shops that remain open still want money in return for their goods and services. The country has been crippled and the population is on its knees, but these ciphers for normal life are everywhere and, in being so, encourage all those familiar longings. Football is one of them.

That isn’t the argument; discussion is fine. What’s disconcerting, though, is the ‘old men talking, young men dying’ dynamic that appears to lie at the heart of Project Restart. On the one hand, footballers are enormously valuable assets and are treated as such. On the other, this is showing them to be just and only that – commodities being ordered to go out, play, and earn the television revenue and an ever-increasing share of the global market.

How is it that this point has been reached without addressing the concerns of those upon whom this plan depends? What binds Aguero and Murray – a vision of modernity and a reflection of the past – is apparently this shared belief that they can only be heard through the media. How is it that they haven’t been sufficiently reassured? How detached must this process have been for them to still have such reservations and concerns?

Optics have been the currency during this saga. Who looks good, who doesn’t, what’s playing well in the court of public opinion. But perhaps this is the worst optic of them all – the point at which the game has shown its ugliest face and revealed that its old feudal leanings are as active as ever.

“Go out and work the land!”

“But there’s a tiger loose on the estate, m’lord.”