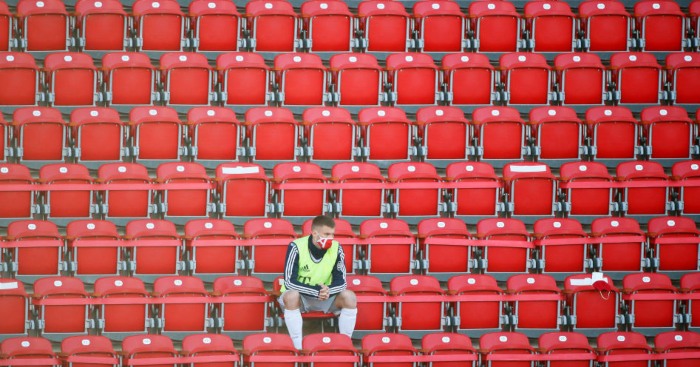 There’s that scene in Apocalypse Now. It’s after Captain Willard has met Colonel Kilgore for the first time and, at night, all the soldiers are on the beach. Someone’s playing an acoustic guitar, everyone’s drinking beer, and there’s even a barbecue cooking in the background.

As Martin Sheen says in the narration, the more they tried to make Vietnam seem like home, the more everybody just missed the real thing.

Which, in a very tenuous, self-indulgent way, relates to the situation in which football finds itself. The sport may be back, but the game really isn’t. Over the last few nights, the Bundesliga dallied with piped in crowd noise – to fairly widespread dismay – and, on their own resumption, the other leagues are likely to trial other means of replicating atmosphere.

It’s not just football, either. On Thursday morning, Australian rugby league resumed, with Brisbane and Paramatta dancing to the sound of pre-recorded crowd responses. Somewhere in the stadium, presumably in a hermetically sealed cave, a work experience boy was sat with his finger over a series of buttons, reacting to what was happening on the pitch. Twenty yards out, excited murmurs. Ten yards out, a few more. Five, a frenzy.

Functionally it actually worked, but the aesthetic was ridiculous. If you can see the empty seats in a stadium, then it really isn’t much of an illusion. Actually, the weirdness is really more of a distraction, because it’s not as if it’s possible to play dumb to the circumstances outside, given the pervasiveness of coronavirus. It’s something you might do to reassure a small child, but adults aren’t quite so good at suspending their disbelief.

In football it would be worse. By applying the same logic – grading reaction by territory – the average match would end up sounding like an unfinished MegaDrive game. There are staples which could be replicated – the urgent roar of a late corner, for instance, or the response to a hopelessly skewed shot – but it’s just not possible to codify a football crowd. Not without making the entire broadcast sound ridiculous.

As an aside, it would actually be interesting to hear the difference between what a broadcaster thinks a football stadium sounds like versus how it actually does. If the Premier League’s self-image was adhered to, every game will – surely – be soundtracked by 90 minutes of audible mania. Like professional wrestling, maybe, or an episode of Pat Sharpe’s Funhouse. There’s an authenticity which comes with the muttering and complaining and boredom and, you suspect, neither Sky nor BT would load their Spotify playlist in quite the right way.

Broadly, then, the theory is the same as it was on that Vietnamese beach: the greater the attempts at artificial normality, the weirder everything will become. Concessions are fine – putting flags over empty seats probably does make sense and, if it’s serving a good cause, the cardboard cut-outs are just about tolerable. But anything zany, or outside-of-the-box? Absolutely not.

That’s partly a preference, but maybe also a necessity. Recently, clubs and broadcasters have discovered that fans are not just an inconvenience to be tolerated, but a vital ingredient within the game. They are actually poorer – figuratively and literally – without them. It’s been quite the revelation for some people and actually, like a few other exploitative industries, watching that penny drop in football hasn’t been without its charms.

Even so, the idea of these experiments is actually quite worrying and, wherever possible, should really be discouraged. Because what happens when someone does unlock the secret formula to the ultimate television product? What if, for instance, there is means of compensating for the lack of supporters in a stadium and doing so in a believable and sustainable way?

Following the announcement that the Premier League was to return, Sky CEO Stephen van Rooyen promised that “we have developed some terrific new innovations to give football fans the very best experience of watching live sport, when going to the match with family and friends isn’t possible, and we look forward to sharing these with football fans shortly”.

How chilling; who knows what those measures will entail. Once they’ve been revealed and whatever concoction of VR technology and Jamie Redknapp they prove to be, what happens next – what’s the next step down that road? Maybe, in this eternal quest for ultimate viewing experience, someone discovers that the entire notion of in-stadium sport is actually a bit ridiculous and that instead, in future, everything can just be done on a sound stage and with the only attendees belonging to tomorrow’s version of Tunnel Club.

Yes, clubs will always need match-day income – or would always prefer to be collecting it – but if atmosphere can be artificially replicated successfully, then doesn’t that begin a very dangerous, very different kind of conversation. One, potentially, which involves more efficient ways of collecting that revenue and how it might be possible to marginalise the sort of supporters who aren’t able to spend tens of thousands of pounds every season.

That’s a fear taken to a ridiculous, silly degree – very obviously – but it’s based on a fairly rational concern and, by implication, encourages twin imperatives. The first: let the game be sterile and strange because that’s better than any other proposal that has been put forward. The second: don’t encourage football to play around with these substitutes. Don’t give it the intellectual prompt to potentially stumble across something which may one day become permanent.