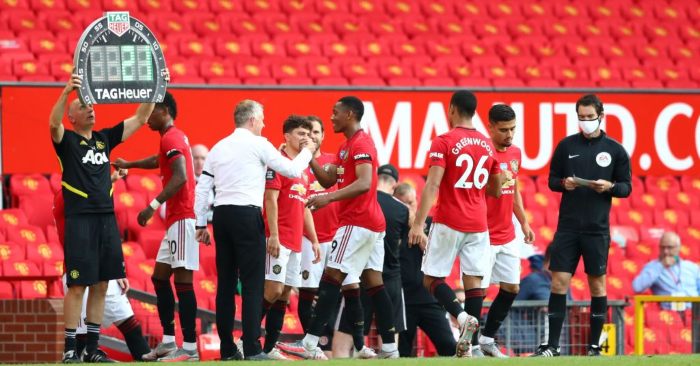 Ludicrously, we’re already 45 games into the Premier League’s Project Restart. Can you even remember a time when those big weird seat-looking things they have at football stadiums weren’t covered up with slogan-daubed tarpaulins? Us neither. Can’t even remember what they used them for. Did they have people sitting there? Feels like they did, but that seems mad. There must have been thousands of them!

Anyway. Premier League football has been back for a while now in its new, altered form, and some of its new weirdnesses and ideas might actually be quite good. Others are bumwater. So which Project Restart innovations should we keep and which should we bin once the whole Covid mess is all sorted out. Let’s have a look…

Live games on FTA television
Easy one, this. Nice for everyone to get the chance to watch a bit of The Barclays, especially your father-in-law who seems to think it is specifically your fault that he can’t watch the football and the cricket because he doesn’t want one of those nasty dishes on his house, thank you very much. And if you can’t find joy in the idea of Bournemouth v Crystal Palace instantly becoming the most second-watched Premier League game ever in the UK, then you and I are very different people.

Five substitutions
That frisson of excitement at the prospect of the phrase ‘quintuple substitution’ getting an airing was one of the best bits of some understandably if still annoyingly humdrum early games during Project Restart. It was a shame in a way that Ole Gunnar Solskjaer went right ahead and actually did it relatively early on, changing quite literally half his outfield players with 10 minutes to go with the game long won against Sheffield United. It was great to see but was never going to be quite as exciting in real life as it was in your head. Just another thing that made already pre-seasonish matches look and feel even more pre-seasonish. But still, you’ve got to be happy with any additional opportunities to use the word quintuple, and it was fun to discover that a quintuple substitution requires so much admin that Juan Mata’s introduction was technically a minute later than his four team-mates’.

But there are other uses for the five subs, and they’re potentially more interesting than Ole’s Full House. It’s probably fair to say that no manager has fully explored the potential that five substitutes offers, but when they do, it could be an actual game-changer. Managers will have far more freedom to make brave and decisive tactical changes, knowing they can still make another one further down the line.

Specific players could be given specific roles for specific situations – let’s be honest, we’re talking about Erik Lamela jumping from the bench and shithousing his way to a yellow card in a harum-scarum 30-minute stint and then being subbed off himself here. Yes, there’s a clear argument here that it would just be another rule that favours the biggest clubs with the biggest and deepest squads, but it could be a really interesting test of managers’ ability to change games on the hop and we’d quite like to see how that turns out.

Different audio options
Opinion is divided about the fake crowd noise. Some people like being able to hear the shouts and instructions and, more often than not, panicked swears from the pitch and touchline. I find it all too eerie and bizarre without the fake crowd noise to remind me this is An Important Football Match.

It’s also been fascinating to watch science try to recreate the sound of a crowd. It can’t really be done, can it? The early teething problems with delayed reactions seem to have been largely overcome, but it’s still not quite right. How come the boffins have been able, for instance, to come up with a passable facsimile of the specific, distinct noise for Half The Ground Thinks That Shot Into The Side Netting Has Gone In but has struggled so desperately to accurately respond to Away Goalkeeper Shanks Clearance Out For Throw or Home Centre-Half Gives Ball Away In Dangerous Position? Perhaps we’ll never know, and maybe that’s for the best.

The wider point, though, is that it’s good that both the crowd noise and ambient sound options are available. There should be way more audio options available. The obvious ‘no commentary’ one that has been toyed with tentatively in the past should always be on the table, but why stop there?

If we can put fake crowd noise on, we should be able to do anything. How about an option to watch all Jose Mourinho’s Spurs games accompanied by the sound of Mauricio Pochettino chuckling to himself for 90 minutes? Or Arsenal games soundtracked by David Luiz’s inner monologue? What about Leicester games where all you can hear is Brendan Rodgers talking about himself? What about having that one for all football matches? What about having it for all TV programmes? What about having it implanted into a microchip in your brain? COME ON, BOFFINS, GET CRACKING.

Having a big section of stand set aside for Arsenal’s substitutes to lounge about in
You have to say that’s magnificent.

There could be a dissertation written about this single image. Arsenal FC, in all her tragedy and glory, captured for posterity. pic.twitter.com/cQ2qRACfKJ

The drinks break
Didn’t have drinks breaks in my day, lad. Youngsters today, eh. Yeah. Understand why they’ve had them. Need to get rid of them as soon as possible. It has been mildly diverting to see a longstanding cricket cliché about the concentration-destroying power of the drinks break make its way seamlessly to football. Not since ‘corridor of uncertainty’ has a concept made the move from cricket to football so effortlessly. Received wisdom has it that cricket’s drinks break has taken more wickets than any bowler in history, and it certainly seems to have made a prolific goalscoring start in football. Steven Bergwijn’s opener for Spurs against Manchester United in one of the first games back had all the hallmarks as United’s defence collectively left a straight one. But it’s probably nothing more than confirmation bias, and the drinks break mainly just seems to slow everything right back down just at the point where a typical cagey start is beginning to show signs of getting going.

The Bottom Five
Yes, technically the bottom five were also here before the interruption and yes, we will get rid of 60% of them soon enough. But 1) they’ve been even worse during Project Restart and 2) that 60% figure still just feels both inefficient and insufficient.

Tottenham 1-0 Everton
Seriously, that might have been worse than not having football at all. Nineteen full internationals in the starting XIs, six more coming off the bench and all overseen by two of the most decorated managers in the game’s history. Not a single clue or idea between the lot of them. A match that pre-season would have disowned. It is no exaggeration to say the world is a slightly worse place for the existence of this football match. Get rid of it. Expunge it from the records. This has the bonus benefit of putting Jose Mourinho back down to 199 Premier League wins.

Ball boys
While small cones are marginally less likely to help set up a goal or mischievously antagonise a millionaire into lashing out at them, has anyone really missed ball boys? No. Like ever leaving the house or brushing your teeth, ball boys are just one more thing the Covid pandemic has shown to be entirely unnecessary.