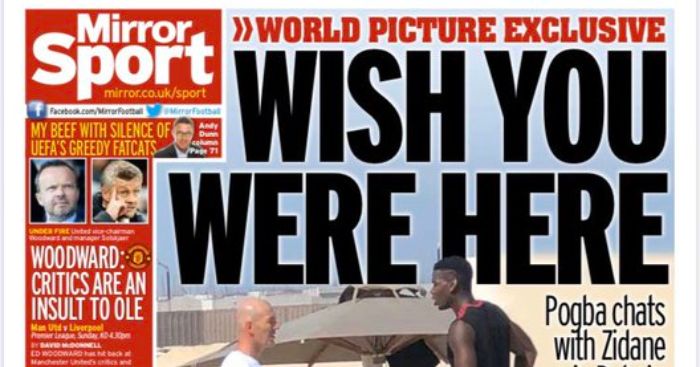 Mirror image
‘WISH YOU WERE HERE’ screams the Daily Mirror‘s back page on Friday. They’ve bagged themselves a WORLD PICTURE EXCLUSIVE, folks.

And it’s David McDonnell here to provide the context on an image ‘that is sure to set tongues wagging again’. You see, Paul Pogba ‘met with’ Zinedine Zidane in Dubai, thereby ‘sparking fresh doubts over his Manchester United future’.

Oh wow. Pogba is meant to be injured for the game against Liverpool but still, being pictured with the manager of a club he has openly flirted with in the past is hardly helpful. Silly sod.

Mind you, it soon becomes apparent that McDonnell has no actual information to reveal. The pair ‘chatted by a pool in Dubai after meeting up during the international break,’ which does make it sound like some sort of pre-arranged talk, yet the entire story is comprised of just five filler paragraphs.

And then we get this, with the newspaper deadline only just having passed.

It is there where Richard Jones tells us that ‘their encounter was merely a coincidence caught on camera’. Pogba is in Dubai at the Transform Altitude Performance Center to help regain his fitness, with Zidane speaking at a ‘conference about the integration of artificial intelligence (AI) in the sports industry’ in the area.

So the Mirror get the best of both worlds: a salacious back-page exclusive and an online story to explain – and pretty much debunk – it soon after. Sales and clicks in equal measure.

But it does beg the question as to how McDonnell missed such crucial information that his colleague managed to find so soon after? He must be ever so embarrassed.

The kids are all right
Most other back pages are dedicated to Ed Woodward’s latest comments on Manchester United. ‘I’M BACKING OLE 100%, INSISTS WOODWARD’ says the Daily Mail.

The Sun go for ‘OLE TRINITY’ because they are The Sun and it is an incurable affliction.

Both contain the following quotes from Woodward:

“Ole has instilled discipline where we may have lacked it in recent years. Ole’s vision maps our objectives. We must win trophies, play attacking football and give youth its chance.”

Then comes a quote that is slightly altered:

“The middle of last season, after Ole’s arrival, shows where we want to be. We saw a team playing fast, fluid football” – The Sun.

But why would either change what the man has literally, presumably, said? Could it be because one of them – The Sun – wants to blow smoke up Woodward’s arse while the other is wondering along with the rest of us why Solskjaer’s best period would possibly “feel most relevant”, rather than the parts in which he’s been a bit sh*te?

On an unrelated note, here is Neil Custis telling everyone that Woodward ‘remains amazingly stoical’ and ‘has had to bite his lip on accusations that he is to blame for all the bad signings’. Poor thing.

Here is a man who ‘continues to work to make sure the right players are identified,’ as thought it’s part of his actual job.

But Mediawatch really must take umbrage with this claim that Solskjaer ‘plays the kids’. Their youngest league starter has been £19m Jose Mourinho signing Diogo Dalot – and he was substituted after an hour of his only game – followed by £45m signing Aaron Wan-Bissaka, Axel Tuanzebe, £15m signing Daniel James and three-year veteran Marcus Rashford.

Would any of those players really not have featured under any other manager?

Eight Premier League managers have started a teenager this season. Solskjaer is not one, despite Manchester United's injury crisis. So let's leave off that one a bit for now.

Andreas Pereira at 23 and Scott McTominay at 22 are no kids. Jesse Lingard at 26 is the oldest youngster ever. Let’s stop pretending that Solskjaer is some sort of footballing pied piper.

Stay humble
Not that Custis is done. Here he is offering the footballing definition of a word Mediawatch thought it understood before now:

‘Humble enough to wear the club suit with a tie and the top button done up and then sign autographs.’

That top button really is key.

Fast and furious
The furore from the rearrangement of Christmas fixtures has reached the back page of The Sun:

‘Manchester City are furious they will have to play TWICE in just 46 hours over Christmas.’

Is that the first recorded tabloid use of an understandable ‘just’ when referring to a period of time?

‘The champions say the Premier League have given Liverpool a huge helping hand in the title race.’

Number of times City chief operating officer Omar Berrada insisted the title had been ‘handed’ to anyone: Zero.

Number of times City chief operating officer Omar Berrada quite justifiably said “we need to protect the players’ well-being,” that “Premier League games are a huge physical demand and it’s not ideal to be made to play twice in less than 48 hours,” and that “it doesn’t give the players time to recover”: Plenty.

Of course, when stoking the fires of a rivalry for no real reason, it doesn’t actually matter what people have said. What’s important is what you wanted them to say.

Which is why we get the following information with only half the context:

‘Liverpool have almost a full day extra between fixtures – against Leicester on Boxing Day and Wolves on December 29.’

‘Liverpool currently have an eight-point lead over second-placed City – but Guardiola will know that December could be a key month.’

Simple. The Premier League is favouring Liverpool. The 30-year wait is over.

Although quite what The Sun expected when Liverpool have to fly back from Qatar after the Club World Cup, the final or third-place play-off of which takes place on December 21, is a mystery. Weird that they don’t mention it whatsoever.

Great expectations
Speaking of things that are expected, Martin Samuel is the Daily Mail‘s old man and xG is this week’s cloud.

‘Watching Match of the Day on Saturday you will see, as always, the expected goals tally for each match. It appears as xG in the bottom right corner of the screen,’ he begins.

‘Club analysts have been working with xG for close to a decade now, but it has only recently entered the public consciousness.’

Some exposition follows, in which Samuel postures that ‘what happened does not matter’ with xG, ‘it’s what should have happened that counts,’ even though it’s actually designed to measure what would ordinarily be expected to happen in similar scenarios. Hence the ‘x’ in xG.

All of this is to explain ‘why those of us who might be termed old school tend to regard xG cynically’. Because it’s new and involves laptops and different ways of looking at stuff, basically.

But Samuel’s point is simple: xG is a load of balls because in that ‘fantasy world’, Tottenham beat Bayern Munich 1.45-1.34 when they actually lost 7-2. It’s almost as if xG doesn’t pretend to be an all-encompassing, comprehensive way of revolutionising scorelines, but rather a useful supplementary tool.

‘With this turnaround in fortunes they should book an expected bus, for the expected parade, showing off all the expected trophies they will win. Indeed, with success built on such firm and logical foundations, what could possibly go wrong?’

It was the xG for one game, Martin. You sound terribly insecure.

And considering Bayern scored seven goals from 10 on target and Spurs netted two from eight, it is hardly outlandish to suggest a five-goal deficit was a little unrepresentative of the actual football. As Niko Kovac said: “All of our shots made it, and Manuel Neuer made the difference. Our balls hit the net. It didn’t happen that much the other way around.”

Mediawatch presumes that is all translated from the Croatian for “f**k xG, nerds”.

Change ‘stats’ for ‘eyes’ and it works even better.

David Conn on the Glazers’ legacy.