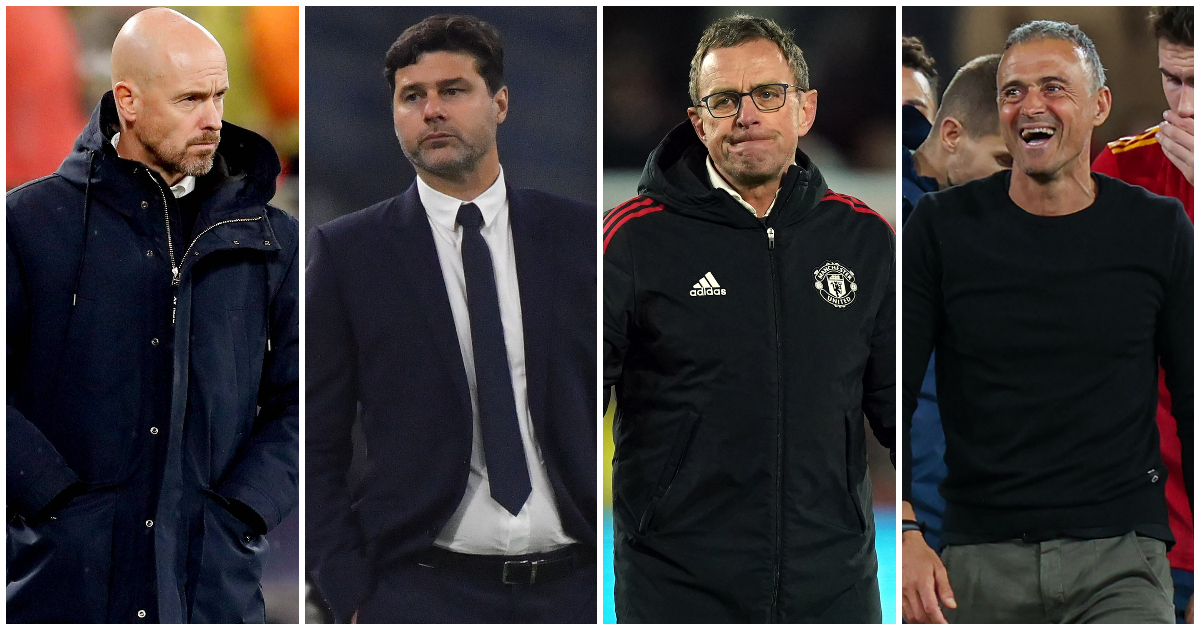 There are strong arguments both for and against appointing any of Pochettino, Ten Hag, Rangnick and Luis Enrique as the next Man Utd manager. So here they are.

Pros
It surely has to happen sometime. Pochettino and Manchester United have been inextricably linked since 2018, before Jose Mourinho was shown the door. It seemed Poch would finally get his chance when Ole Gunnar Solskjaer was floundering but he got fed up of waiting and, understandably, took the offer from PSG. But a year and a half into the job in Paris, it seems that Pochettino is still keen on returning to the Premier League with United.

And reports suggest the United players would be just fine with that. Not that they should have any say whatsoever in who becomes the next man to attempt to tease the talent from the delicate egos in a squad which needs ripping apart anyway. But if Poch hasn’t learned how to deal with big names and reputations in Paris, surely he never will.

He also knows how to build up from the bottom. Or sixth, which is where he found Tottenham and where he may well find United come the summer. From there in 2013/14, he turned Spurs into title contenders and Champions League finalists. If he can do it for Daniel Levy at White Hart Lane, United must believe he could do it for them.

Pochettino also has experience of working for a club with muddled priorities. The Glazers’ objectives are seemingly in line with PSG’s, if their Ultras group is correct: ‘The club wants to be a global brand, obsessed with selling shirts, to the point of forgetting its heritage,’ they have written in a letter to the club. Managing a team amid that backdrop isn’t easy but at least Poch would be prepared.

Poch’s preferred style of play certainly ties in with what United fans would expect and his record of nurturing young players, especially at Spurs with Harry Kane, Dele Alli, Eric Dier and Harry Winks blossoming under his tutelage, sits well with Old Trafford history.

Cons
So low is the general opinion of the United squad these days that their endorsement for Pochettino immediately triggers suspicion. Why do these players, some of whom will have gone through four managers come the summer, prefer Poch? Do they foresee an easier ride under him compared to some of the other contenders?

Like many of the United players, Pochettino’s honours list could be scribbled on the back of a stamp. At the moment, it reads: Coupe de France, and the French equivalent of the Community Shield. By the end of the season he will be a Ligue 1 champion, and he is expected by the PSG hierarchy to be a Champions League winner, too.

Two trophies in a 12-year managerial career is perhaps not a haul that would impress Manchester United, but the club are hardly in a position to be sniffy given their own recent drought.

Pros
From a style perspective, like Pochettino, Ten Hag certainly fits the brief. His Ajax side play an attractive, attacking brand of football, scoring goals for fun while remaining relatively secure at the back. They currently top the Eredivisie table having scored 64 goals in 21 games while conceding only five. It was a similar story last season when they bagged an average of three goals a game to finish with a plus-79 goal difference.

Tactically, Ten Hag is an astute coach, with Ajax able to switch systems mid-game – something United have been incapable of doing for far too long. Though that says as much, if not more, about the inflexibility of the players as it does the managers.

Last month, Ten Hag became the fastest manager in history to reach 100 league wins with Ajax, a feat achieved in 128 games, but his success is not limited to the Eredivisie. It was at their expense that Spurs reached the Champions League final upon making the semis in 2019, while their record through the group stage this season was a perfect six wins out of six.

The 52-year-old is ready to take the next step and is reportedly keen to do just that at the end of the season, so if United decide he’s their man, a deal would be difficult to screw up even for the Old Trafford board.

Cons
The fact that for Ten Hag it would be a step up represents a gamble on United’s part. Is this a job for a manager without the experience of managing a club in the top five leagues, whose only experience outside Holland is with Bayern Munich reserves?

And his domestic achievements at Ajax will always come with the caveat that it is the Eredivisie – a competition the Amsterdammers are expected to win with comfortably the league’s biggest budget.

At Ajax, Ten Hag has enjoyed the stability of working under Edwin van der Sar and Marc Overmars – at least until this week when the latter was allowed to make his own way to the exit door. How would he cope moving from the serenity of the Johan Cruyff Arena to the dumpster fire at Old Trafford?

And that’s just in the boardroom. The dressing room is an entirely different disaster zone. If some United players had to Google Ralf Rangnick when he was appointed, just imagine the blank, unimpressed faces among the squad members upon being informed Ten Hag is their new manager. Again, that is the players’ problem, not Ten Hag’s, but their sense of entitlement would certainly be a problem he has not yet encountered, certainly not on the same scale.

Pros
Rangnick was initially appointed as interim manager with a view to moving upstairs, supposedly as a consultant. But the German admitted in his first press conference that he could stay on for another year as first-team boss.

At least he now knows the scale of the job, even if he is struggling somewhat with finding the best way to do it. What he will learn in those six months in interim charge would take another manager a similar timeframe to absorb.

And while the job has been harder than perhaps Rangnick expected, he has made a decent fist of getting results. United have lost only once on his watch and remain firmly in contention for the top four.

During that time, Rangnick seems to have got a decent grip of the squad. Some things have been allowed to fly in the dressing room but the manager hasn’t been afraid to call out the bullsh*t when he sees and hears it.

Cons
Though it is more of a damning indictment of the squad, Rangnick has not been able to impose his preferred style of play on this United side and it seems that a huge overhaul would be necessary if the 63-year-old wants to implement the methods he was hired for.

Rangnick’s record of one defeat in 12 also requires context. It’s actually two losses when you count the penalty shoot-out against Middlesbrough, and four draws, including a couple with relegation-threatened Burnley and Newcastle as well as chucking away two points at Villa, mean United have won only half of Rangnick’s games in charge.

The same problems remain, certainly in attack. United are too often ponderous going forward, and though they have tightened up at the back, they have still only kept clean sheets in a third of their matches under the German.

United’s next manager needs to be one allowed to rebuild – is Rangnick going to be around for long enough? He spoke about recommending that he stay in charge for “one more year, like he did at Leipzig”. Such an arrangement would only serve to kick the can down the road, delaying the problem rather than solving it. United would find themselves back in the same position in 12 months with absolutely no guarantee that the field of candidates will be as strong.

Pros
Holding fire for a year might suit Enrique, though…

The Spaniard’s personality could be just what United need. Enrique clearly doesn’t struggle with pressure or big decisions having swapped Real Madrid for Barcelona during his playing days, while managing at Roma for a year and three at the Nou Camp prior to taking the Spain job illustrates the 51-year-old’s strength of character.

He will have needed that while managing the egos at Barcelona, including Lionel Messi, Neymar and Luis Suarez, an attacking trio he moulded together to win everything possible at the Nou Camp. With two La Liga titles and a Champions League winner’s medal among his other pots and trinkets, Enrique is comfortably the most decorated of the contenders to boss United.

Enrique isn’t afraid to p*ss people off – a trait that the Red Devils should embrace. He called out his former Spain assistant for being “disloyal” and left a number of big names out of his squad for the Euros, naming only 24 when he could take 26, and still managed to give Italy their toughest match of the tournament in the semi-finals. He has since partially avenged that shoot-out defeat by beating the Azzurri on their own patch in the Nations League.

But Enrique’s players, those who buy-in to his approach, love him. Thiago Alcantara, having played for all three, said the Spain boss “has the analytical positioning of Pep Guardiola and the aggressiveness of Jurgen Klopp”.

Cons
The timing is off. Enrique simply isn’t available.

And he won’t be for the rest of the year until Spain have competed at the World Cup in Qatar. Rangnick could hold the reins until then, but we already know that the Spanish FA don’t appreciate their coaches being distracted before major competitions, having axed Julen Lopetegui on the eve of the 2018 World Cup in the wake of his announcement that he would take over at Real Madrid after the tournament. To avoid a repeat, all parties would have to keep any agreement under their hats until Christmas, prolonging the speculation and uncertainty.

We don’t know if there is even the desire to appoint Enrique, but we can guess not. Antonio Conte is similarly feisty, a quality which would have served United well, but there was absolutely no appetite from the board to engage with a manager unafraid to speak his mind to the powers that be. Enrique presents a similar prospect to the board, one they evidently have no wish to embrace. Their loss. Again.