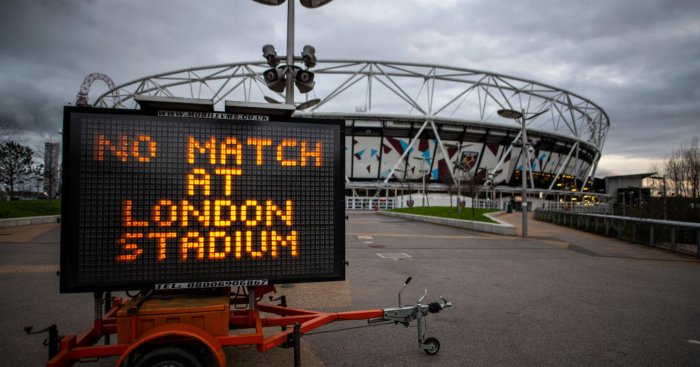 Games are being called off. Fixtures are piling up. The virus is becoming ever more infectious, but no-one appears to have made a plan about what to do in this situation. Not UEFA. Not the FA. Not the EFL. Not the Premier League. There has been no thought as to how to operate in what was always going to be shifting and varied circumstances. No fall back position. Nothing. Football’s firm belief in its own exceptionalism meant it assumed it would just get through somehow. How else to explain this driving whilst blind policy?

And now the stupidity of this Mr. Magoo approach is being revealed as the idiocy it obviously was to anyone who had thought about it for even a moment before the season started. It was not hard to imagine a second wave of infections through the winter, so everyone should have worked out what to do if and when it happened, and made allowances in anticipation of the fact.

“The Premier League has not discussed pausing the season and has no plans to do so,” was the top-flight response after the Fulham v Spurs game was called off.

How have they possibly “not discussed” it? That’s downright irresponsible.

Clearly, they’re just hoping all the games can somehow be played, got out of the way and be voided from the football body like a painful kidney stone. It no longer seems to be anything to do with the validity or otherwise of the various competitions, but more to do with just completing the games to get TV money, whatever it takes, and sod the consequences.

Sam Allardyce wants a circuit breaker but the choice isn’t to merely pause the season or not, it is to shut it down or not. End it. Void it. Draw a line under it and stop football being played until we are all vaccinated. The alternative, if players continue to become infectious and sick in ever larger numbers, is to play games with ever more depleted teams, making it less a sport and more survivalism.

If players think lockdown rules don’t apply to them – and some clearly do not – then the virus is going to spread through the industry and force the season to be scrapped sooner rather than later anyway. The architecture of the fixture list is shuddering under the earthquake of the virus.

There’s no doubt that the whole thing is one giant mess, with league games, cup games, European games and international tournaments all queuing to pull up at football’s bus stop.

But it’s complicated. So what are the pros and cons of keeping going or shutting it down?

YES! SHUT THE WHOLE THING DOWN
* Because the playing schedule is not currently sustainable. As more games are cancelled, the pile-up increases with no relief in the summer as the Euros are still in the diary. There is no getting around this. There are too many games and not enough time to play them without a significant number of players being injured. As the virus spreads and more games are called off, the congestion will only get worse.

* Because playing more games in fewer days means more and more injuries. The clubs with bigger squads will therefore get an unfair advantage. It stops being a fair competition and becomes instead a war of attrition.

* Because the quality of the product is denuded by the volume of players being absent through injury or being so exhausted they can’t perform to the required level.

* Because it puts non-playing staff – the vast majority of whom are shamefully still not paid the Real Living Wage – at unnecessary risk, especially on match days.

* Because it is not a level playing field when some have radically more congested fixture lists than others. Injuries caused by that distort results even more. On top of that, some games have already had fans and some haven’t. Again, this has made an uneven competition where teams have not competed on the same basis. Whoever wins the titles and trophies will be forever asterisked in the history books. Any win will be so devalued as to make it worthless.

* Because it is poor TV entertainment made worse by staggering kick-offs to make sure everything is on a screen. And it all has to be on TV to avoid the Premier League answering the question: what is the point of games played if no-one can see them? Football as a societal, communal event is over, crushed under the wheels of the broadcasting juggernaut.

* Because without fans everything feels hollow and a little pointless. These are little more than glorified practice matches being played merely so the participants can be paid more money in one day than the typical viewer earns in a year.

* Because it isn’t ‘improving the morale of the nation’ as was claimed back in the summer by some of football’s more egregious exceptionalists, including the DCMS Minister for Muppetry, Oliver Dowden, because ‘the nation’ isn’t that bothered about football. That’s why so few watch it as a percentage of the population and why even a minority of those who have paid for a subscription to watch it actually do so. You and I might like it; the vast majority are indifferent and their ‘morale’ is unaltered by whether it is being played or not. They will not miss a cancelled season.

NO! KEEP IT GOING AT ALL COSTS!
* Because if the season is called off, some TV rights cash will have to be paid back and new payments withheld. You might think this is a pro, not a con. However, almost all this money is paid to players, managers and club executives. Turning off the cash tap again would mean everyone would effectively have to be paid out of the owners’ pockets. Owners would bitterly resent having to pay footballers for not actually playing football for a second time in a year, but know that legally everything is stacked against them if they tried to withhold wages and tell players and the PFA not to be such greedy bastards.

They also need to protect the capital value of the players for the future of the business. Without going nuclear, locking the doors and liquidating the club, they are legally obligated to keep paying the wages as stated in player contracts. While the rest of us might think multi-millionaires still collecting an average of £71k per week for not doing anything at all seems some shade of insane, that is the nature of Premier League contracts and economics. That is what, like it or not, we encourage and continue to endorse with our subscription money. So owners really need to keep the season going, just to keep the money coming in to pay the players, manager and executives.

* Because broadcasters are the bosses of the game and they would have nothing to show and would have to refund punters a percentage of their subscription money. They’d also lose advertising revenue, primarily from gambling companies. OK, they already amortise the losses on every game that overpaying for right fees while not having enough subscribers makes inevitable, across the wider company. But they paid a lot of money for this sport and a lot of people have gone to a lot of effort to put it on in a coronavirus secure way.

* Because the statistics industry will be made redundant. It is a lot of people’s livelihoods. With the expansion of statistical analysis at every level, and its integration with the betting/gambling industry from a macro to micro to granular level, it is a massive business and one almost entirely dependent on live football. For it to be turned off again for a few months would be financially disastrous for everyone.

* Because the football media machine would freeze up. You will not read or hear many in the media arguing for football to stop again, no matter how crucial it is that it does, because we all rely on it for income and work. Who argues for their own impoverishment? Given so much of the industry is freelance and the chancellor has pretty much spat in the face of freelancers, you can see their point. Cessation of gambling adverts which comprise so much of the income to so much football media, would cripple businesses and consequently cause unemployment. For individual writers, journalists and others who are shorn of all income, not supported by the state for reasons no-one can discern, and facing rising debts and even homelessness, football must keep going.

* Because hardcore football lovers – probably anywhere from one to three million people in UK based on TV viewing and match attendance figures – would be bereft without their favourite sport to distract them from the awfulness of the world. This should not be underestimated in importance, nor overestimated either.

* Because ending the season early and finalising a table on a points per game basis is fundamentally unfair. But to scrap it and begin it again next season, and not come to some sort of conclusion, would mean all the games played so far would’ve been a pointless waste of time and make everyone look foolish, even ghoulish, for even bothering to play football when a pandemic is killing thousands of people every week.

So what to do? There’s no easy way around this. No solution that does not have substantial consequences.

But surely, our guiding principle must be to put people’s health and safety above everything else and if we do that, the argument for curtailing the season becomes more and more persuasive as infection rates rise and stay high.

The debate may soon be moot. If enough players continue to behave with blatant selfishness and disregard for others, they may bring about the season’s demise themselves. When you are still selected for the team if you break the rules and if you still get paid lavishly whether you play or not, why would you care if you’re some sort of heinous modern version of Typhoid Mary? The rest of us might suffer one way or another if the season is cancelled, but ironically, the only people who will not suffer at all are Premier League players who will merely get richer and richer without even having to do the very thing they’re paid to do.