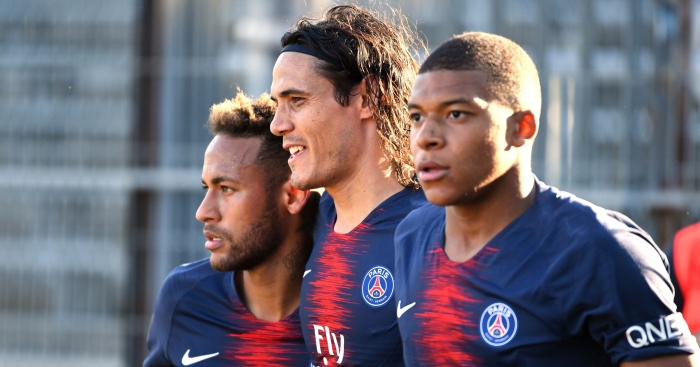 We’re only talking about the big leagues here…

18) Bayern Munich – 11 (Robert Lewandowski 5, James Rodríguez 3, Arjen Robben 3)
Bayern have been wretched this season so it’s a good job they took such a firm stance with Lewandowski.

15) Celta Vigo – 11 (Iago Aspas 5, Maximiliano Gómez 4, Sofiane Boufal 2)
Aspas could score 60 this season and 70 the next, but he’ll still always be remembered for one thing…

14) Chelsea – 12 (Eden Hazard 7, Pedro 3, Alvaro Morata 2)
Hazard there, fluttering his eyelashes at Real Madrid, who obviously need him, given they are way down in 32nd on this list.

13) Napoli – 12 (Lorenzo Insigne 6, Dries Mertens 3, Arkadiusz Milik 3)
Insigne has been linked with Liverpool of late. Basically because he scored against them and that’s how these things work.

12) Hertha Berlin – 12 (Ondrej Duda 6, Vedad Ibisevic 4, Javairo Dilrosun 2)
This Hertha trio are tied with Genoa’s for having scored the highest percentage of their team’s goals – 92.3 per cent.

11) Genoa – 12 (Krzysztof Piatek 9, Goran Pandev 2, Christian Kouamé 1)
This is basically the work of Serie A’s leading scorer Piatek, who is scoring at a rate of a goal every 80 minutes. No wonder Chelsea are interested.

10) Manchester City – 13 (Sergio Aguero 6, Raheem Sterling 4, Riyad Mahrez 3)
The Premier League’s top scorers have had a division-high 11 players on the scoresheet so far this season.

9) Arsenal – 13 (Pierre-Emerick Aubameyang 6, Alexandre Lacazette 4, Mesut Ozil 3)
Aubameyang has scored four goals in his last two appearances, both of which have come as half-hour cameos off the bench. They are awful sexy now.

8) Borussia Monchengladbach – 13 (Alassane Plea 5, Thorgan Hazard 4, Jonas Hofmann 4)
Plea is off to a decent start in the Bundesliga after joining from Nice in the summer, while Thorgan – brother of Eden – has been involved in 11 goals in nine matches in all competitions.

7) Borussia Dortmund – 14 (Paco Alcacer 7, Marco Reus 5, Jadon Sancho 2)
Alcacer has started only one Bundesliga game so far this season. The Spain striker is currently scoring a goal every 18 minutes, which is frankly mental.

3) Eintracht Frankfurt – 15 (Luka Jovic 7, Sebastien Haller 5, Ante Rebic 3)
A five-goal haul for Jovic in the 7-1 win over Fortuna Dusseldorf propelled Frankfurt way up this list and inevitably led to links with Tottenham.

1) PSG – 22 (Kylian Mbappe 9, Neymar 8, Edinson Cavani 5)
Despite leading the way here again, PSG’s star trio have chucked in the third lowest percentage of their team’s goals (59.5 per cent) on this list.