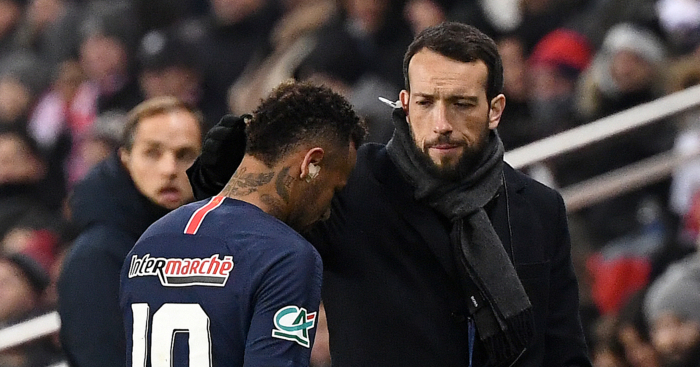 Paris St Germain coach Thomas Tuchel admits it will be “very difficult” for Neymar to be able to face Manchester United in their Champions League tie because of a foot problem.

But we really want to see him against Phil Jones 🙁

The Ligue Un leaders swept aside Rennes 4-1 at the Parc des Princes on Sunday night, with Edinson Cavani scoring twice.

However, the absence of their Brazilian star was again under the spotlight after Neymar suffered a recurrence of a foot issue in last week’s Coupe de France clash with Strasbourg.

According to Le Parisien, X-rays have shown a fracture line on the fifth metatarsal which the Brazil forward had an operation on last year.

Tuchel maintained there had not yet been a full diagnosis, but accepted Neymar would most likely be ruled out of contention for the first leg of their last-16 European tie at Old Trafford on February 12.

“It’s going to be very difficult, that is clear,” the PSG coach told reporters following Sunday night’s win, according to L’Equipe.

“I do not have confirmation of a new diagnosis.

“As I explained yesterday (Saturday), it’s too early to talk about a return date.

“We have to wait for the first week, which is very important, and its reaction to treatment. Only after that can we be more precise, but it’s going to be very difficult (for the United match). It is not a secret.”