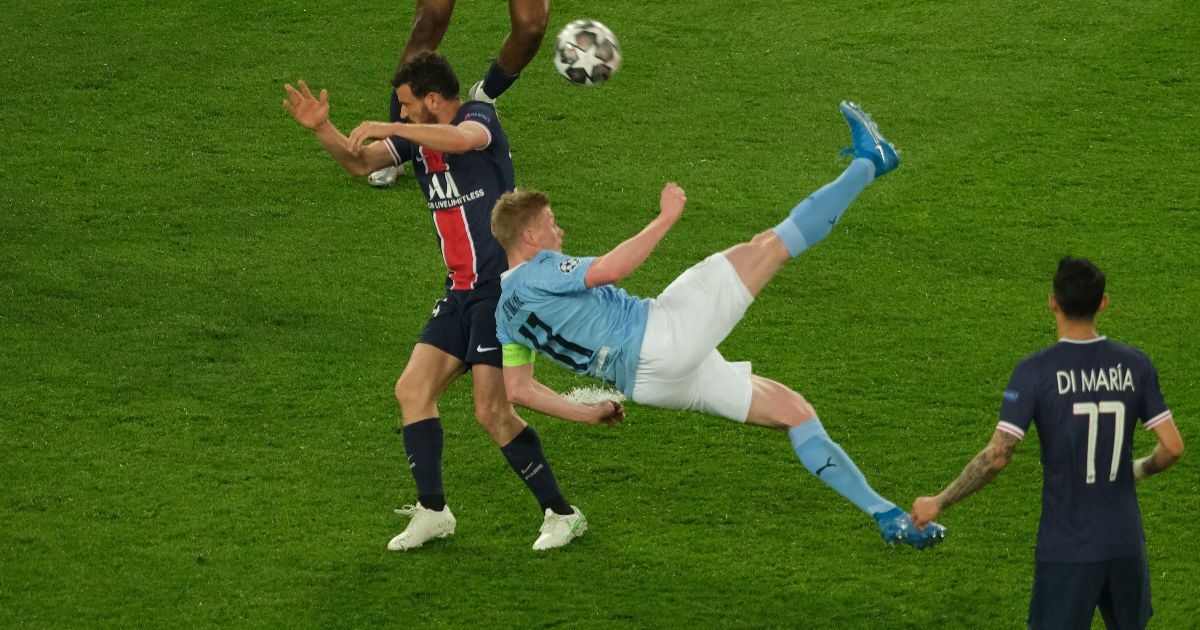 Kevin De Bruyne claims Manchester City’s stunning success over Paris St Germain “doesn’t matter” yet because the job is only half done.

City put themselves within touching distance of a first appearance in the Champions League final as they came from behind to beat the 10-man French side 2-1 at the Parc des Princes on Wednesday.

Yet with the second leg of the semi-final still to come at the Etihad Stadium next week, De Bruyne is refusing to get carried away with thoughts of the final.

MAILBOX: Is everything ok now? We need to punish the ‘slimy’ ESL 12…

The Belgian, who scored City’s equaliser in the French capital, said: “Yes (we are closer) but it doesn’t matter.

“We have to do our job and play the game next week. I know we had a good result but it is still going to be a hard game.

“It is still halfway so there is a long way to go.”

City were pegged back in the early stages as PSG hit them with a series of quick counter-attacks and also caused problems from set-pieces.

It was no surprise when the hosts claimed the lead in the 15th minute as Marquinhos headed home from an Angel Di Maria corner.

They had further opportunities but City dug in to prevent more damage and grew in confidence as the game went on.

City controlled possession throughout the second half and levelled in the 64th minute when a De Bruyne cross evaded everybody and bounced in at the far post. Riyad Mahrez added a second from a free-kick soon after as he found a gap in the PSG wall.

PSG lost their discipline in the latter stages and their problems were compounded when Idrissa Gana Gueye was sent off for a poor challenge on Ilkay Gundogan.

De Bruyne said: “It was really good in the second half. We had difficulties at the beginning and gave them too much space, especially their defenders and midfielders.

“After that, we did much better and played really well. At this moment in the competition there is a lot of pressure and maybe some guys felt it. Then in the second half the guys showed that we have unbelievable quality.”

City could be crowned Premier League champions prior to next Tuesday’s second leg if they beat Crystal Palace on Saturday and Manchester United lose to Liverpool on Sunday.

De Bruyne said: “We have to focus on ourselves on Saturday as we play Crystal Palace very early, so we have to do that and then get ourselves ready for the next game.

“I don’t care who are favourites. I am there to perform my game. I am looking ahead to Crystal Palace and then we are going to rest up to be ready for next week.”

Mahrez has also warned that PSG could hit back strongly next week.

He said: “There is still a second leg which is going to be difficult. We cannot forget that they are a very good team and they are going to be dangerous at home. We just need to stay solid.”