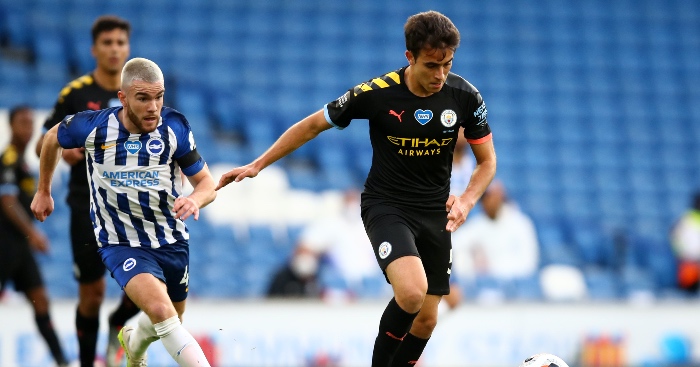 Paris Saint-Germain will rival Barcelona for the signature of City defender Eric Garcia this summer, according to reports.

The 19-year-old looks set to leave the Etihad at the end of the season after running down his contract.

He is rumoured to want a return to the Nou Camp, but another European giant has joined the race to sign him.

FEATURE: Five reasons why Leicester will win the Premier League

According to Spanish source Mundo Deportivo (via Daily Mail), PSG want to beat Barca to the transfer of Garcia.

It’s thought that new boss Mauricio Pochettino is a big fan of the centre back.

He’s only made 30 first team appearances for City but has made a good impression during that time.

Garcia originally looked set for a Barca return this month. The club’s delayed presidential elections have put an end to that hope, leaving the player in limbo for the next few months.

Barca officials won’t sanction a £30 million move before the new president is announced. That gives PSG the chance to hijack their bid this summer.

Garcia’s contract expires in June which allows him to move on a free after that point.

Whoever wins the race for Garcia will be snapping up a promising young defender with bags of potential.

He came through the ranks at Barca’s famed La Masia academy. A move to Manchester followed in 2017, with Garcia captaining City’s under 18s team in his first season.

The player made his first team debut in the Carabao Cup against Leicester City in December 2018.

His position in the squad is currently being taken by a resurgent John Stones and an in-form Ruben Dias.

Their partnership has helped Pep Guardiola’s side to reach six league wins on the bounce.

Garcia could feature in City’s match this weekend. They face Cheltenham Town in the fourth round of the FA Cup.