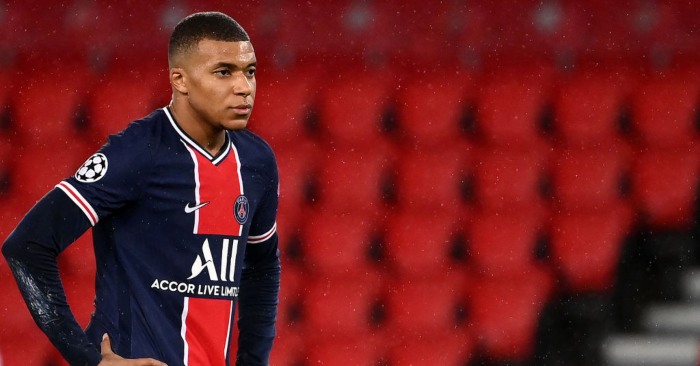 Kylian Mbappe ‘does not show a fierce desire to extend his lease in Paris’. Those are the words (via Google Translate) of Le Parisien, who say that the striker is ‘intrigued’ by Liverpool, though we all know he will probably head south-west to Madrid rather than north-west to Merseyside, where the football clubs are run more like businesses than playthings. Even with just one year remaining on his contract next summer, it would take a world-record bid and world-record wages to persuade PSG to sell and then lure the Frenchman to the red side.

And that lack of ‘fierce desire’ to stay in Paris – his home – came even before Tuesday night’s humiliating defeat to Manchester United. For the first time in 16 years, PSG lost a Champions League group stage game at home and they were deserved losers. We imagine Mbappe is now ‘intrigued’ by anywhere but Paris, where nobody at all seems to be terribly happy. Coach Thomas Tuchel looks gaunt and broken-spirited just two years into his reign, which is what inevitably happens when you look to the bench and see Moise Kean – failing upwards from a disastrous year at Everton – as your most promising impact substitute.

And yet we are just weeks into a season which follows possibly the greatest in the club’s history, bringing a domestic treble and a Champions League final. The glow lasted significantly less time than the marathon season and by early October, Tuchel was being publicly admonished for asking for more signings. “If we keep the squad we have today, honestly, we can’t ask for the same results,” he said. Early signs are that he was right.

Tuchel himself cannot escape criticism for Tuesday night’s terrible performance. “From the start until the end it felt like we were never at our highest level,” he said. Some of the blame has to lay at his feet; he should have known that Solskjaer would set up his team deep and defensive, relying heavily on their counter-attacking verve. And yet Tuchel’s players seemed to have no plan to counteract those pretty obvious tactics, attacking so slowly that transitioning to defend against pace became almost impossible. Neymar was dropping so deep to escape United’s bank of defenders that he strayed into a different arrondissement.

With no fans inside the stadium, teams have to somehow create their own momentum and their own enthusiasm, but these were in woefully short supply in Paris, where the lack of crowd exposes far more distress calls than shouts of encouragement. A club often accused of lacking a soul looks particularly forlorn in this desperate season. Take away the noise and take away the largesse – PSG have spent just pennies on loan signings to improve their team this summer – and it all feels and sounds like the miserable end of an experiment.

They could still win a domestic treble this season and there will surely be better European nights but this time next year, PSG are unlikely to have the same manager or the same extraordinary superstar. Is anybody showing a ‘fierce desire’ to make PSG a success again? There was precious little evidence on Tuesday night.