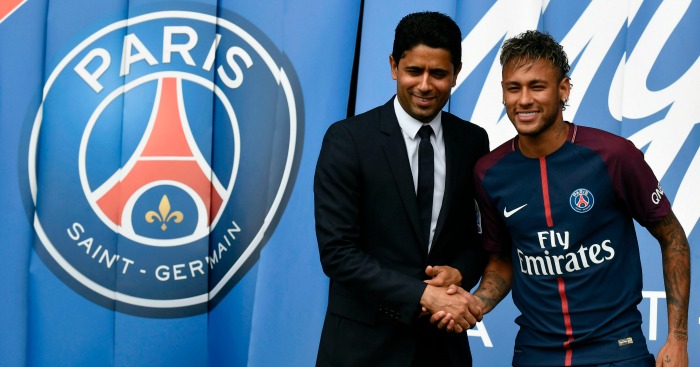 UEFA’s recent decision to close an investigation into the accounts of French champions Paris St Germain has effectively been reopened by the chairman of the committee that oversees the Financial Fair Play rules.

The probe into PSG’s finances between 2015-17 was closed last month by the chairman and chief investigator of the Club Financial Control Body’s (CFCB) investigatory chamber.

PSG were bought by Qatar Sports Investments, a Doha-based fund with close links to the Qatari royal family, in 2011 and since then have been generously sponsored by Qatari firms.

This revenue – coupled with the huge uplift in revenue that occurred when beIN Sport, a Qatari-company run by PSG’s president Nasser Al-Khelaifi, bought Ligue 1’s broadcast rights – has allowed the club to go on the type of spending spree UEFA’s FFP rules were meant to curtail.

That is why the decision to drop the investigation was greeted with some surprise, and it is understood some members of the investigatory team believe the club’s sponsors have been paying inflated sums to artificially boost income, which the club denies.

This split has now become public as the CFCB’s overall chairman, Jose Narciso da Cunha Rodrigues, has referred the decision to the body’s adjudicatory chamber.

In a statement, UEFA said: “In light of the recent decision of the Club Financial Control Body chief investigator to close the investigation into Paris Saint-Germain – which commenced on 1 September 2017 – the chairman of the CFCB has decided to send this decision for review by the adjudicatory chamber.”

A former general prosecutor in Portugal and judge at the European Union’s Court of Justice, Cunha Rodrigues has been in charge of UEFA’s financial watchdog since October 2012, while the CFCB’s chief investigor Yve Leterme is a former prime minister of Belgium.

The UEFA statement added this move to review the case does not prejudge it, which means PSG could simply be cleared again.

The basic premise of FFP is that clubs can only spend as much as they make and PSG have been under scrutiny since the Qataris took over – they were hit with a large fine in 2014 and forced to play with a reduced squad in Europe for a season.

This intensified last summer when they bought Brazilian superstar Neymar for a world-record £198million from Barcelona and then secured France international teenager Kylian Mbappe from Monaco.

The Mbappe deal was described as a season-long loan followed by £166million payment – a ruse many critics saw as a means to circumvent FFP spending limits – while the Neymar swoop provoked fury in Spain, with LaLiga president Javier Tebas suggesting PSG were “urinating in the swimming pool”.

Those two transfers, however, are not actually part of the closed UEFA investigation, as they will not show up in PSG’s accounts until this year, and it has been estimated that they will need to bring in at least £50million in player sales, as well as reducing the wage bill, to meet their next FFP limit.