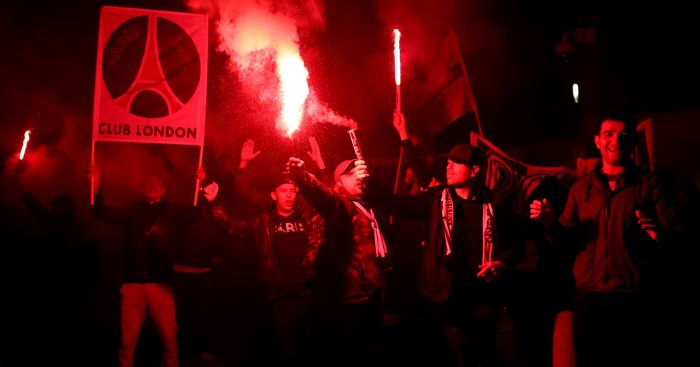 Paris St Germain have expressed their “full support” to fans who travelled to the Champions League match against Chelsea Women, where weapons, fireworks and drugs were found on board a supporters’ coach.

A coach carrying about 50 PSG fans who had travelled to London from France overnight was turned away from the Kingsmeadow ground ahead of the quarter-final first leg.

The Metropolitan Police said “knives and knuckledusters” were recovered while one man was arrested for possession of class A drugs.

There were also reports of vandalism at the stadium during Thursday morning, as well as disorder later on at Waterloo and Wimbledon stations. Chelsea won the first leg 2-0.

Despite the widely-reported incidents, PSG issued a club statement on Friday morning criticising the handling of the situation and claiming no damage had been caused at the stadium by their fans.

“We repeat that the local authorities have not provided any evidence of wrongdoing, at least no fact available justifies such a ban to attend the match,” the PSG club statement read.

“All of our supporters have been searched, and if any of these searches or facts had been under criminal law, we can imagine that the concerned supporter(s) would not have been able to leave British territory without being disturbed.

“Surprisingly, we note that Chelsea, on the morning of the match, did not want the presence of our supporters, arguing of alleged damage to the stadium which is, according to local testimonies, prior to the arrival of our fans in London.

“We express our fullest support to fans of Paris St Germain who, in the middle of the week, had arranged their schedule to come to support our women’s team and we count on their fervour during the return match next Wednesday in Paris.”

PSG fan Sofiane Mihoub, who has lived in London for more than 15 years, attended Thursday’s match and stressed the away supporters in the ground “were very peaceful”.

He told the Press Association: “To me they only have 12 stewards (at Kingsmeadow) and they were not ready to receive that many people and so they find any excuse to not let them in.

“When we left the ground everything was fine. We all (Chelsea and PSG fans) left at the same time, there were no incidents whatsoever.

“It’s more hype than anything else with the news spreading that things were found on the bus and making it bigger than what it is. They make a snowball out of it.”

Following Thursday’s match, Chelsea manager Emma Hayes hoped the incident will not discourage the club’s supporters from travelling to France.

Chelsea are understood to be looking to issue travel advice to Blues supporters ahead of the second leg, which will take place at Stade Jean-Bouin on March 27, to make sure their fans’ experience in Paris is the safest it can be.

UEFA has been contacted for comment by Press Association Sport.