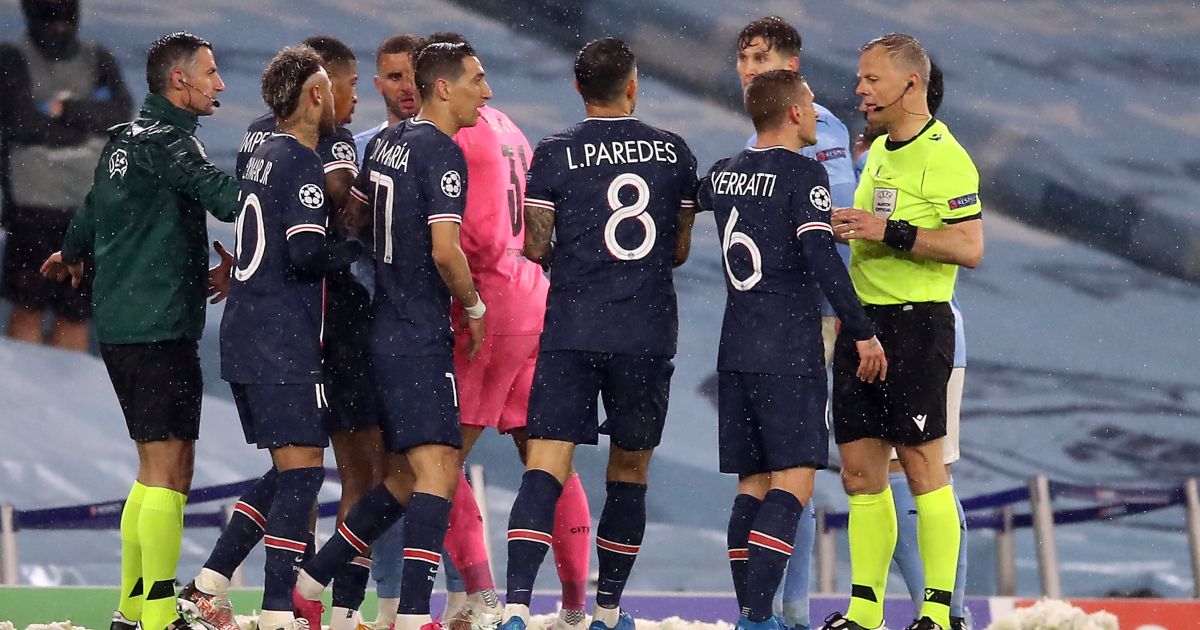 PSG players have claimed that the referee in their loss to Manchester City on Tuesday told two of their players to “f**k off” during the match.

Riyad Mahrez scored in each half as the Premier League leaders beat the 10-man French champions 2-0 at the Etihad Stadium on Tuesday to complete a 4-1 aggregate victory in their Champions League semi-final.

City were formidable in defence against a PSG side still showing plenty of attacking intent despite the absence through injury of star striker Kylian Mbappe, who was an unused substitute.

They then took the key chances when they came. Mahrez gave them a firm grip on proceedings with the opener on 11 minutes, pouncing on a rebound from a Kevin De Bruyne shot after Ederson launched a quick counter-attack.

The Paris-born winger then doubled the advantage after another raid just after the hour.

PSG then had Angel Di Maria sent off for a petulant stamp on Fernandinho as the visitors lost their composure in the latter stages.

And Marco Verratti claims referee Bjorn Kuipers swore at him twice during the game, he said: “The referee told me, “F**k you” twice. If we say that, we get banned for ten matches. I talk a lot to the referee but I don’t say that.”

Former Manchester United midfielder Ander Herrera also claimed: “The referee told [Leandro] Paredes to f**k off. It’s incredible. If we say that we get a three or four match ban.”

On the incident PSG boss Mauricio Pochettino said: “We need to believe what they are telling us but the most important thing is we are not in the final.

“If something is there, maybe UEFA will investigate the situation but it is not an excuse.”

Proud of the journey you’ve been on, honoring the Parisian colours 🙌

A great adventure that ends tonight against Man City.

Pochettino added: “We played the game we planned to play. We started really well, creating chances and dominating Manchester City. That’s not easy.

“Not many teams can dominate a team like Manchester City. Sometimes in football you need a percentage of luck in some periods of the game.

“In the end, they were clinical. They scored from a situation where we were pressing high, with a long ball. I need to congratulate Manchester City because they are having a fantastic season.

“After six or seven seasons of working, Pep is doing well. At the same time, we feel proud of our players and our team.”