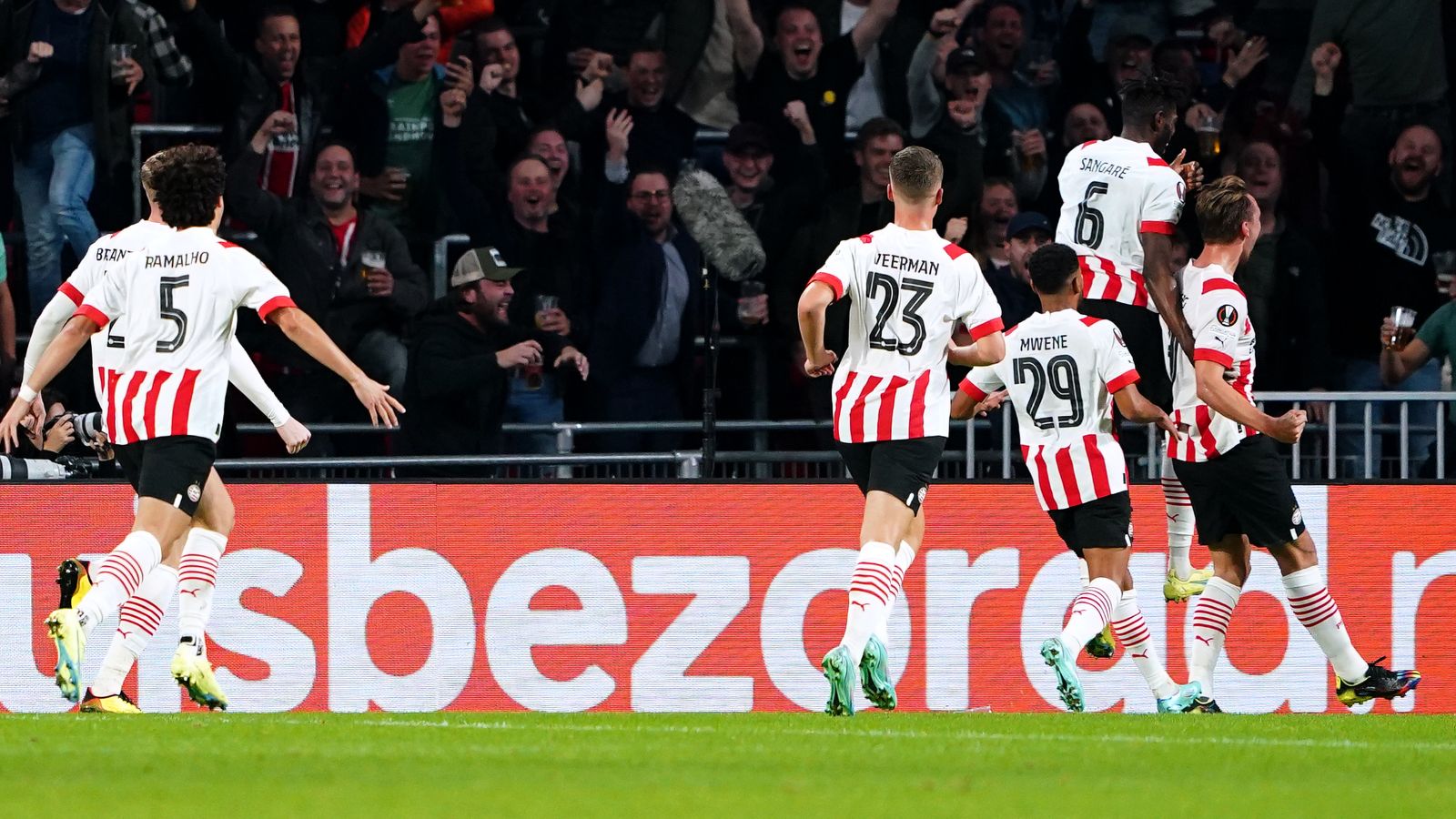 Cody Gakpo and Xavi Simons were both in fine form as PSV Eindhoven condemned Arsenal to their first defeat of the season in the Europa League.

A point would have been enough for Arsenal to secure top spot in Group A but they were beaten thanks to goals from Joey Veerman and Luuk de Jong.

The Gunners can still top the group. To do so they must match PSV’s result in the final round of group fixtures next week.

After confusion in the build-up surrounding what shorts Arsenal would wear to avoid a kit clash, the visitors ended up riding by the seat of their pants as PSV had two goals disallowed before finally opening the scoring through Veerman.

Aaron Ramsdale – on his European debut, with Matt Turner missing out as a precaution due to a groin issue – made a fine low save from Xavi Simons before Cody Gakpo fluffed his lines moments later, with the hosts setting the scene for the rest of the evening.

Gakpo was quiet at the Emirates Stadium a week ago but showed his quality in collecting a through ball and clipping a fine finish over Ramsdale – only to have his celebrations cut short by an offside flag.

With the game opening up, Eddie Nketiah drew a smart stop out of Walter Benitez with a near-post flick from Fabio Vieira’s cross.

PSV had a second goal of the half disallowed after Simons battled past Kieran Tierney, Rob Holding and William Saliba before finishing beyond Ramsdale, only for Anwar El Ghazi to have been caught offside in the build-up.

The half ended with Martin Odegaard stinging the palms of Benitez, but the visitors went for the break lucky to be level.

Nketiah flashed a shot past the post and Tierney curled over the crossbar as Arsenal started the second half brighter.

PSV, though, were still a threat at the other end, with Simons and Veerman both calling Ramsdale into action before Gakpo flashed a shot across goal.

It was third time lucky for the hosts, Veerman steering home a fine finish to break the deadlock 10 minutes into the second half.

Shortly afterwards the lead was doubled. De Jong, having been introduced at half-time, made the most of Ramsdale coming off his line and failing to punch clear a corner which the PSV skipper duly nodded home.

Arsenal, with Thomas Partey, Bukayo Saka and Gabriel Jesus all thrown on in an attempt to turn the game around, almost went three behind as Gakpo turned in a cross only to once again be thwarted by an offside flag.

De Jong then headed a fine chance wide with Arteta’s side well and truly on the ropes, although Nketiah still worked Benitez as Everton loanee Jarrad Branthwaite cleared away bravely.

Arsenal could not get any closer to a consolation than that, with former United striker Van Nistelrooy dishing out just a second loss of the campaign to Arteta’s side after the Red Devils won their Premier League meeting last month.