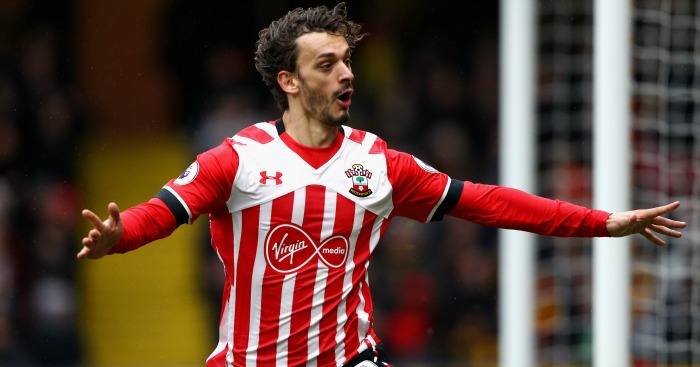 Claude Puel joked it would take four defenders to stop Manolo Gabbiadini from scoring as the Italian continued his hot streak in a 4-3 win at Watford.

Saints responded to their EFL Cup final loss to Manchester United with a win at Vicarage Road which featured Gabbiadini’s sixth goal in four games since his deadline day move from Napoli.

Gabbiadini scored twice at Wembley and had another ruled out, incorrectly in Puel’s opinion, for offside.

Puel said: “It was difficult for him today. He played against three centre-backs.

“The next time it will be four centre-backs, but he continues to score.

“Of course it’s fantastic work. All this gives good confidence for the team. It’s important to continue this way.”

Nathan Redmond scored twice – his first Premier League goals since October – and Dusan Tadic was also on target for Saints.

Redmond could be called up for England’s matches with Germany and Lithuania this month and Puel believes he needs to add goals to his game.

“It was time. I’m happy for Nathan,” Puel added. “Nathan doesn’t score a lot of goals and he has all the qualities for this.

“I hope these two goals give him confidence for the future.

“He can become a strong striker for the national team. For the moment it’s important he continues his work and continues to make progress.”

Puel praised his players’ response to the Wembley disappointment, but lamented the lack of forthcoming action.

Saints’ prior Premier League game was the 4-0 win at Sunderland on February 11 and their next is at Tottenham on March 19.

Puel added: “I’m happy for my players. It was a difficult game to prepare for after the final and after the disappointment.

“It was very important to win today, to keep a good level, a good position in the table for the future.

“We cannot play for two weeks. This is difficult to keep good attitude, good intensity in training sessions.”

Gabbiadini’s goal came after Stefano Okaka had levelled the contest at 2-2 with 11 minutes to go.

The Italian pounced on Heurelho Gomes’ error and Redmond struck for the second time to give Saints a two-goal lead.

There was a nervy conclusion as Abdoulaye Doucoure netted in stoppage time, but Saints held on.