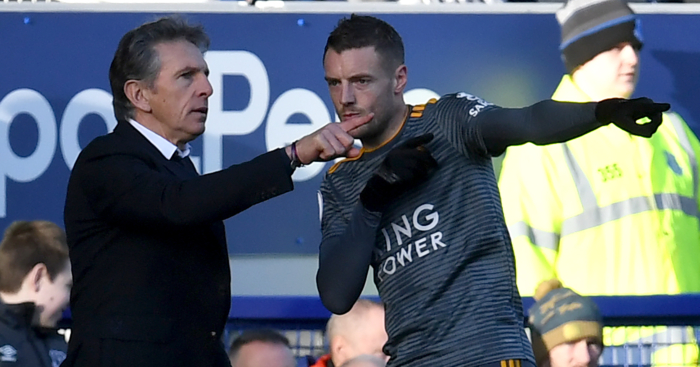 Leicester boss Claude Puel has dismissed suggestions of a rift with Jamie Vardy.

The striker was filmed apparently upset Puel was speaking to Paul Pogba on the pitch after the 1-0 defeat to Manchester United last weekend.

The footage seemed to show Vardy calling someone a “f***ing k***head” – although it was unclear whether or not that was directed at the Frenchman.

But Puel – who has confirmed Marc Albrighton is likely to miss the rest of the season with a hamstring injury – insisted there are no problems with the forward.

He said: “I have a good relationship with him. We know Jamie – after he lost he is angry, it’s normal for a player.

“If I thought one of my players was disrespectful to me or the club there would be a sanction but that was not the case.”

Puel will be counting on Vardy to deliver once again when they make the trip to Wembley on Sunday, with the former England man boasting an impressive record against the top six sides – currently totalling 28 goals since the Foxes returned to the top flight, and he acknowledges that being forced to sit back plays into his striker’s hands.

“Perhaps because we have to put in place a deep block and we have more possibility to play counter attack,” he said, when asked for the reasons behind the record.

“And perhaps some players can have more desire, more concentration, more motivation against big teams.

“It is always a good challenge for all my squad. We have showed a lot of quality against big teams.”