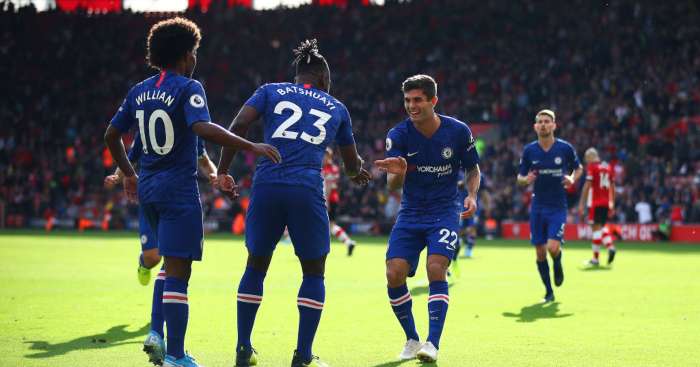 Christian Pulisic insists his £58million price tag is not weighing heavily on his shoulders after struggling to make an impact at Chelsea.

The United States international did not even make the bench for Wednesday’s Champions League match at Lille and has struggled to make his mark since moving to Stamford Bridge in the summer.

Pulisic’s £58million transfer from Borussia Dortmund was agreed in January – when Frank Lampard was not manager – but he had not played in the Premier League since August 31 before his ten-minute cameo appearance against Southampton on Sunday.

After joining the club for a significant amount of money, more was expected of the American, who turned in an underwhelming display in his recent start against Grimsby in the Carabao Cup.

“This number doesn’t mean anything to me,” Pulisic said about his transfer fee. “I go out and try to give my best every time I’m on the pitch. I’m not sure what the price tag means to you, but I just have to keep trying to perform at my best for myself and for the team.

“You can’t completely ignore it (comments on social media). I don’t live under a rock. I hear things, I see things, but I do my best to block it out. I’m just working hard for myself. The outside opinions don’t matter as much to me as to what’s in the team and myself and the people who care about me.

“So, I’m just going to keep working and do my best and not worry about it. Competition in the team can only make me better and I think that’s what makes teams, it’s guys who are maybe not the second or third man, but they are pushing each other in training every single day. That’s what a good team is all about.

“[Lampard] likes players who work very hard and show a lot in training and I just have to continue to do that, do my best in training and try to earn my position. Culture-wise, it’s been easier than Germany to be honest. From the football side, I guess you could say that [I am still adapting].”

Pulisic added: “That’s my job. I’m in an attacking role and I’m going to do the best I can, to try to get goals and assists,” Pulisic added.

“I’m working hard in training. I want to be there. I hope everyone can see that, so with moments like this I hope I can make a case for myself. I’m not just going to throw a fit and give up ever, so if I’m on the bench it doesn’t mean the gaffer doesn’t think I’m a part of the team, I’ve just got to keep pushing and earn my spot.

“I did the best I could with the minutes I got. I tried to help the team as best I could. I guess I’m happy but I’m going to keep working harder, and I’m never going to stop trying to get more minutes.

“Of course, you want to play, be on the field and be in the team as much as you can, and it hurts not to be there, but I’m happy I got my opportunity.”