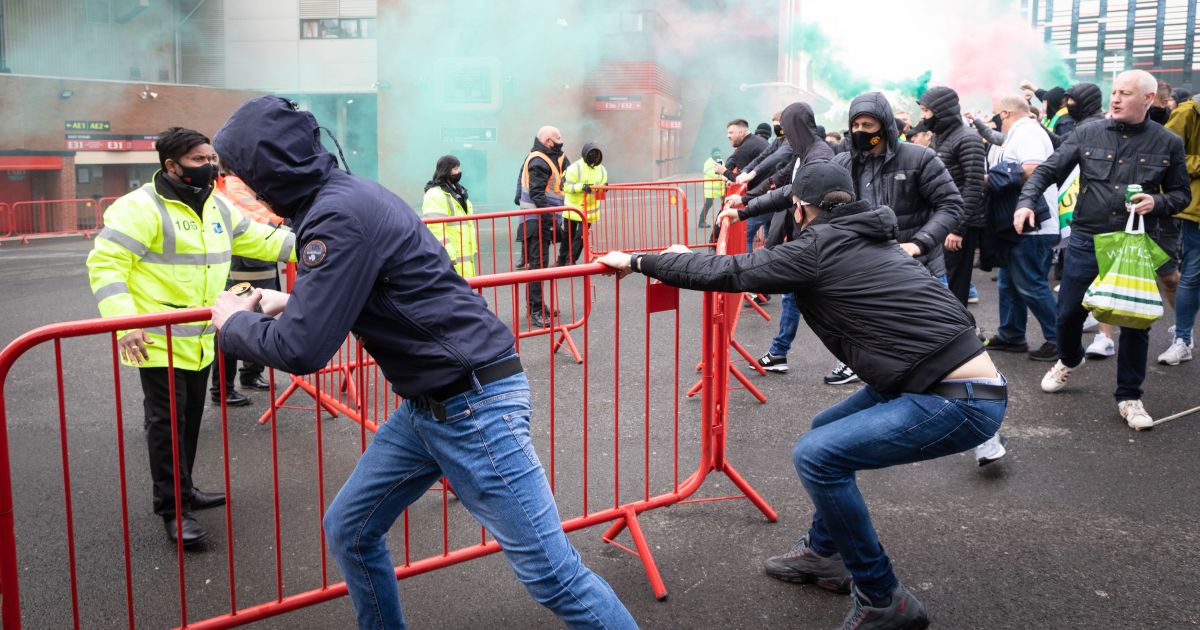 Jason McAteer thinks Man Utd fans took part in a “borderline riot” during their “disgusting” protests against the Glazers’ ownership of the club.

The Red Devils’ match against Liverpool was postponed on Sunday after a peaceful planned protest escalated into violence and an invasion of the Old Trafford pitch.

The protests followed the aborted attempt by the Premier League’s Big Six along with three clubs each from Italy and Spain to launch a European Super League on April 18.

Man Utd fans have been making various stands against the club’s ownership since the Glazers bought the Premier League outfit in 2005 but protests were taken to a new level over the weekend.

And former Liverpool midfielder McAteer has labelled the protests on Sunday as “irresponsible” after the match at Old Trafford was called off.

McAteer told FreeSuperTips: “My first concern was obviously the game going ahead and I thought on from that moment, with the COVID protocol and the safety aspect, which I know Manchester United have had a problem with that in the past, but with the safety aspect in current times I just thought the games not going to go ahead.

“It was just irresponsible, they put lives at risk, tripods were lashed, microphones thrown which is criminal damage, that’s not protest, that’s a borderline riot.

Incredible scenes at Old Trafford. Man Utd fans stormed into the pitch earlier, whilst protests also took place outside of the Lowry Hotel, which acts as United’s pre-match team base. 🤯

We will keep you updated on the status of the game! #StadiumAstro pic.twitter.com/j4L5rBhFPR

“I’m all for peaceful protests, I understand bringing awareness and the more people that stand up to things you can make change and I’m a big believer in that.

“But there’s got to be a right way of doing it and breaking into a football ground and acting irresponsibly isn’t it.

“It’s just ridiculous, irresponsible and disgusting to be honest the way they went about it, in general they’ve let football fans down, never mind themselves.”

Forget the last 16 years, forget the ESL breakaway, no one with a Barnet like that should be allowed to own a football club.

And McAteer thinks “the punishment needs to fit the crime” with the ex-Republic of Ireland international suggesting Liverpool could be given the three points.

“It’s whether they want to make an example of what’s happened, maybe the punishment needs to fit the crime.

“If the Premier League were to hand Liverpool the three points, then it sets a precedent for the future, if this happens again, then this is the punishment.”