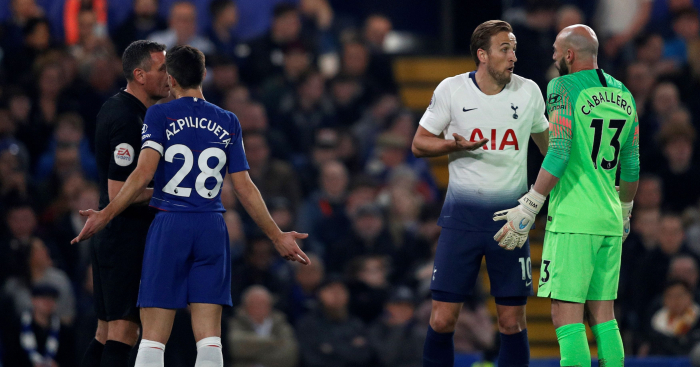 The FA were “protecting its own interests” in being “a little lenient” with Harry Kane after his attempted headbutt on Cesar Azpilicueta.

Kane was left facing a possible suspension after an incident with Azpilicueta during Chelsea’s 2-0 victory over Tottenham on Wednesday.

The England striker tried to push his head into the defender’s but, as with much of what he did in midweek, he missed the target.

The FA confirmed on Thursday he will face no retrospective action however.

Can you imagine if that was Mo Salah?

Cascarino, fresh from getting annoyed at someone scoring a Panenka penalty, believes the FA have favoured the England captain.

“The FA is protecting its own interests by showing leniency to Harry Kane,” he told The Times. “If they can be a little lenient to England’s captain, then of course they are going to be.

“There was every chance he would have been charged for his clash with César Azpilicueta during Tottenham’s 2-0 defeat by Chelsea on Wednesday, but it wasn’t exactly a “Liverpool kiss”. I think the FA has realised over the years that it makes sense to avoid confrontation with their best players.

“In 1998, Alan Shearer was charged by the FA with deliberately kicking Neil Lennon in the face while playing for Newcastle United against Leicester City. The England captain was furious and asked for a hearing, at which he was cleared by a three-man FA panel. The FA would not want a repeat of that and I think going after Harry is the last thing they want to do.

“A three-game ban would have been excessive but it was ungentlemanly conduct and he did deserve a slap on the wrist. I think the maximum punishment could have been a one-match ban.

“I certainly think if it had been another player without the same prestige or importance to England then they would have been made an example of by the FA.”