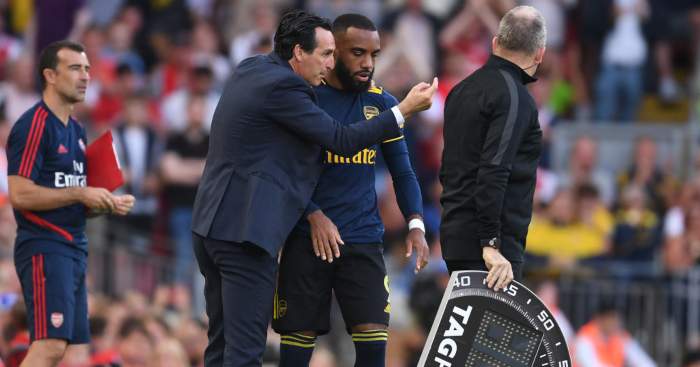 Former Crystal Palace chairman Simon Jordan thinks new Arsenal signing David Luiz is “a flat-track bully at best,” while he has questioned whether Unai Emery has what it takes to coach a top Premier League side.

The Gunners lost 3-1 to early Premier League leaders Liverpool on Saturday after winning their opening two matches of the season.

Emery‘s tactics were brought under the microscope after the match as some pundits wondered why he had gone with a midfield diamond against Jurgen Klopp’s side.

However, it was Gunners defender Luiz who Jordan picked out for criticism after the defeat.

Jordan told talkSPORT: “The press were going ‘Who has had the best transfer window? Maybe Arsenal have’.

“Anybody with half a brain, with respect, looks at David Luiz and says ‘Why do you want that in your dressing room, as a centre-half, when you’ve got a defensive unit that’s not a unit?’

“He’s a flat-track bully at best, we saw him fall apart for Brazil, he’s lightweight and a show pony!

“He’d probably be better pushing him into a central midfield role because he might have the wherewithal to put his foot on the ball there and provide a little bit of steel there.

“But not in central defence! His responsibility starts and begins with himself as far as he is concerned.

“But I’m talking about your belief that Arsenal play out from the back and that is all they are going to do. But Luiz strikes me as the type of player who will play any ball that he wants to play.

“He will hit 50-yard diagonals – ‘Hollywood balls’ – if he feels like it. So that doesn’t quite play into the narrative that they are conditioned to play out from the back.”

And Jordan began to question Emery’s managerial abilities too, he added: “I’ve got this image in my mind of Unai Emery, thinking that there is something about him. But maybe there just isn’t?

“Because I have got Sevilla in my mind and the Europa League and what he has done there, but maybe there just isn’t.

“I think there’s a plan, but when I see transactions like Luiz I think ‘no, there is not a plan’.”