Home All The News Pundit: Liverpool’s Salah should have ‘100 per cent’ seen red 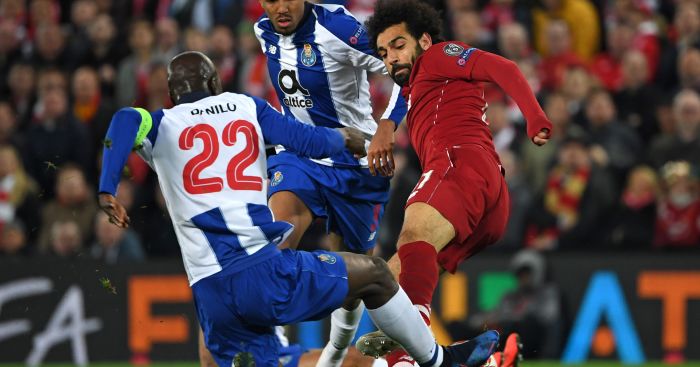 Former Liverpool player and ESPN pundit Steve Nicol thinks Mohamed Salah should have been sent off in Liverpool’s 2-0 win over Porto despite “not going for the player”.

However, Liverpool struggled for fluency after the interval and the Portuguese champions are likely to provide stern opposition at the Estadio do Dragao next Wednesday.

Salah escaped without any punishment for a controversial challenge on Danilo with ten minutes left and that was after referee Antonio Miguel Mateu Lahoz consulted VAR.

The Egyptian tried poking the ball past his opponent but it got taken away at the last moment and the forward ended up following through onto the defender’s shin.

And Nicol thinks that the referee should have sent Salah off despite there being no intention to catch the player.

“I thought it was a red.

“Fortunately, Mo Salah was not going for the player.

“He completely misjudged where the ball was and went over the top of him.

“I don’t think he had any intention whatsoever of catching the player.

“But it was reckless, it endangered the opponent, and it should have been a red, whether he means it or not.”