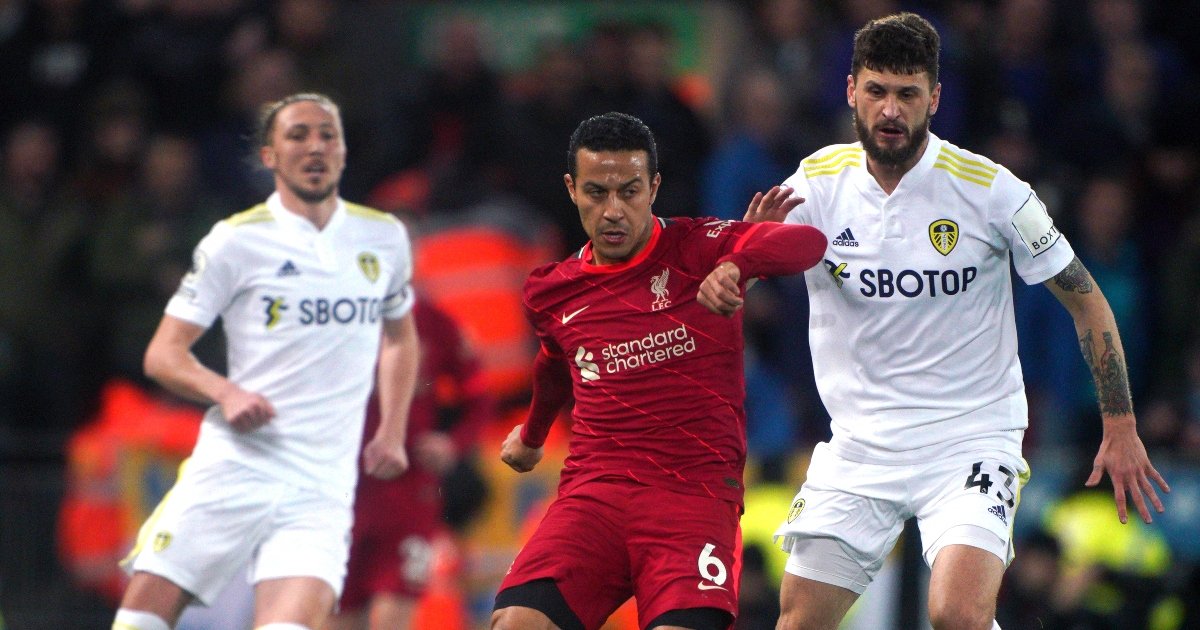 Liverpool’s signing of Thiago Alcantara has made them more like title rivals Manchester City, according to Tim Sherwood.

The Spaniard joined Jurgen Klopp’s side in the summer of 2020 but his first season was interrupted by injuries to both himself, and a number of key teammates.

Mane breaks every record and Rangnick given Klopp treatment

However, after returning from an hip injury suffered at the turn of the year, Thiago has impressed in Liverpool’s midfield and looks set to play a key role in their charge for trophies on four different front this season.

Former Tottenham and Aston Villa manager Sherwood has been impressed but the midfielders ability to dictate the tempo of the game, a quality that he says makes Liverpool more like Man City.

“I think Man City always had the edge where they could counter attack at 100 miles per hour with the best of them, but they could also keep the ball, rest on the football.

“I think Liverpool do that now, certainly with Thiago when he’s back in that midfield.”

Liverpool thumped Leeds, who were on the back of a feisty affair against rivals Manchester United, on Wednesday night 6-0 and Sherwood added:

“Tonight [Wednesday], it wasn’t about turning it into a basketball match like we saw at the weekend with Man United.

“They want it to be a chaos game, Leeds United and [Marcelo] Bielsa, but [Liverpool] didn’t allow it.

“What was it? 65 per cent possession tonight, keep the ball off them.

“They were never in the football match and Thiago controlled the tempo.”

Meanwhile, Liverpool’s Virgil van Dijk has been full of praise for his defensive partner Joel Matip after the Cameroonian’s goal in the win over Leeds.

Speaking to Liverpoolfc.com after the game, Dutch defender van Dijk was full of praise for his centre-back partner.

“It’s a big quality of him – I wish I had that quality at times!” said the Liverpool man.

“He just can go without any fear at all and hope for the best a little bit! But he has that quality. It’s a big strength of him and obviously it’s useful because it drags other players from their position and today obviously the space was there to make that run and finish it off.

“I said to him already before the game I felt it coming because he had an assist for Diogo [Jota] and I said, ‘A goal is next!’ so I’m obviously very happy for him.”