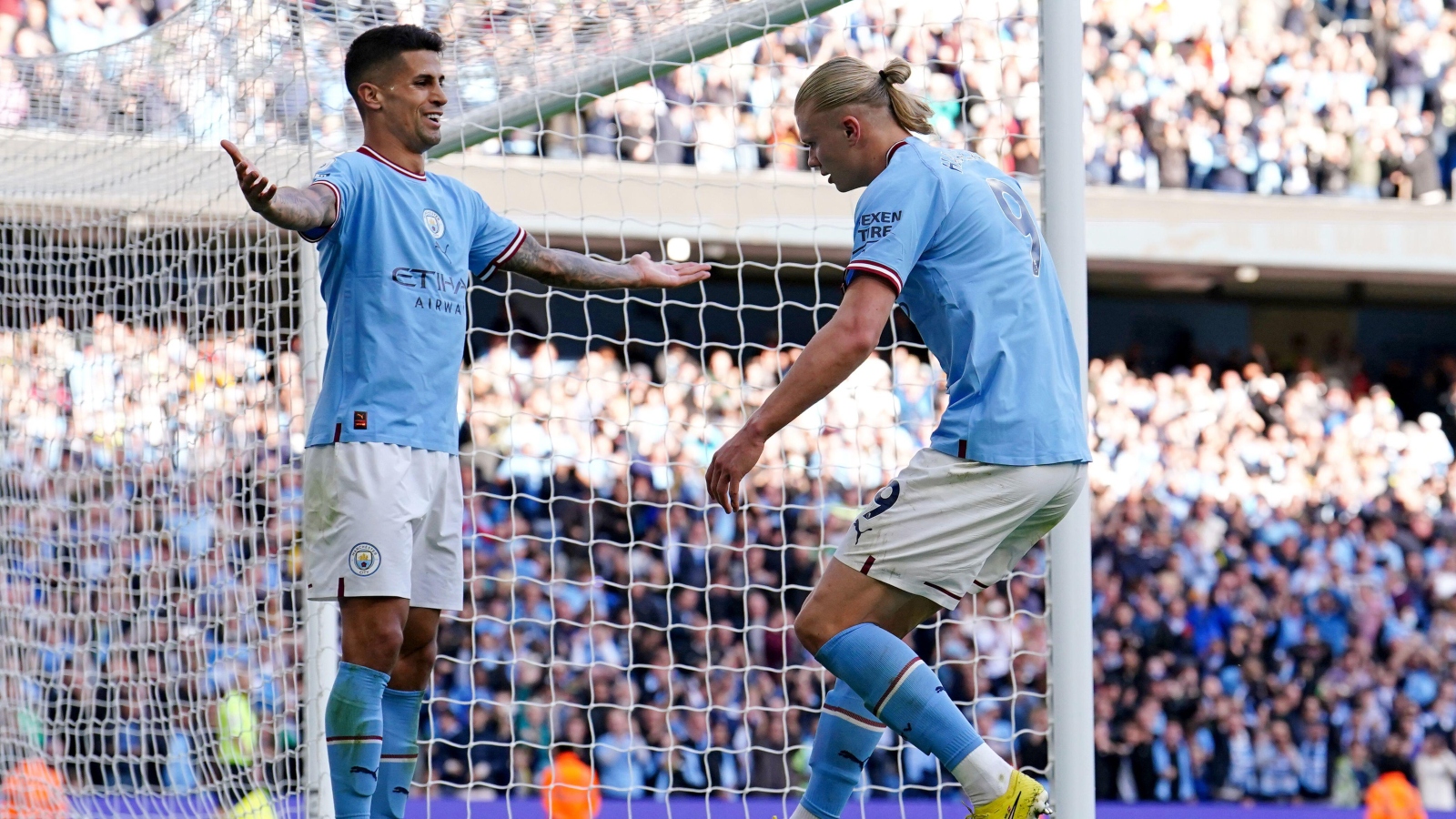 Cancelo has been one of Pep Guardiola’s most consistent performers since he joined the Premier League club from Juventus for a fee in the region of £58million.

Guardiola has been able to play both him and Kyle Walker in the same team, with the Portugal international operating as a left-back.

And in an unnatural position, the 28-year-old has been playing the best football of his career.

This has resulted in a lot of praise for Cancelo, with Crouch insisting he is “as important” for Guardiola as Haaland and De Bruyne.

The two Man City stars are widely regarded as the best two players at the club and have now formed an unfair partnership following Haaland’s summer move from Borussia Dortmund.

Crouch told BT Sport on Tuesday: “I’d put him as important as De Bruyne or Haaland. He has that big an effect on the game.”

The former England striker’s BT Sport colleagues Owen Hargreaves and Joleon Lescott agreed, with the former admitting Cancelo doesn’t get as much praise as he should.

“He probably doesn’t get the credit that he deserves. This guy can play right-back, he can play left-back and you can argue that he’s one of the best in the world in both positions,” Hargreaves said.

Lescott reckons Cancelo would get “more recognition” if he was from England.

“I think teams are now having to select their opposite winger to combat him. Similar to the way it was with Ashley Cole.”

“I had to do that in the Champions League final. You had to recognise that Ash was a threat. You have to have a game plan for him (Cancelo), he’s that good,” Hargreaves agreed.

Man City travel to Anfield to take on Liverpool this weekend.

This fixture is normally a title decider, however, the Reds have started the season woefully and currently sit tenth in the Premier League, 14 points behind league leaders Arsenal.

13 points separate Man City and Liverpool, and a win for Guardiola’s side will surely rule the Reds out of the title race, although manager Jurgen Klopp has already admitted his side don’t stand a chance of lifting the Premier League trophy in May.

Crouch thinks there is now a huge gap between the two teams and despite City’s 0-0 draw in Copenhagen on Tuesday, it is tough to look past them at Anfield this Sunday.

“It’s not quite the game of the last couple of seasons,” the former Reds striker said. “Liverpool seem to be suffering at the moment and City seem to be flying, adding Haaland to the mix, it does feel one-sided.

“We can’t read too much into tonight, they’ve managed to rest three key players in (Phil) Foden, (Bernardo) Silva and Haaland – fresh for the weekend. You have to fancy City.”

Ex-Man City centre-half Lescott added: “I think City go into this one as favourites, I think everyone knows that due to the form of Liverpool but the way City are playing as well.

“Look, it doesn’t give them the divine right to win the game but City go into this game big favourites, more than recent seasons.”

Hargreaves believes it is a “must-win” game for Liverpool in order to “save their season”.

“Thirteen points separate the two sides, for Liverpool it’s must-win, not just to save their season and top four,” Hargreaves said.

“A huge game for Liverpool and to change their season but it’s hard to look past City when they’re firing, you can’t look past them.”