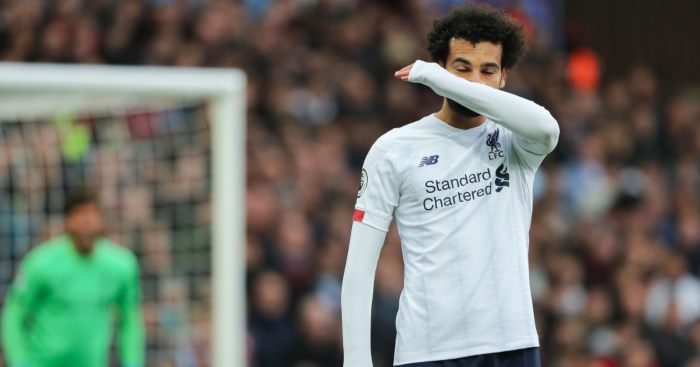 Former Arsenal favourite Charlie Nicholas predicts that Jurgen Klopp could take Mohamed Salah out of the firing line due to his recent “average” form for Liverpool.

Liverpool maintained their six-point lead at the top of the Premier League table thanks to Saturday’s dramatic 2-1 victory at Aston Villa – with Jordan Henderson explaining why the Reds need a change of focus in a bid to end Jurgen Klopp’s ‘mentality monsters’ tag.

However, Sky Sports pundit Nicholas admits that while he enjoyed covering a “thrilling game”, he believes the struggles of Salah in front of goal for Liverpool must be a concern for Klopp and reckons the Egyptian could be axed for Tuesday’s Champions League clash against Genk at Anfield.

“I watched the Liverpool game at the weekend. It was a cracking game and end-to-end with drama too,” Nicholas told Sky Sports.

“Liverpool are not at their best. People might suggest that once they get going, they will be ruthless, but they are getting away with it currently.

“The Napoli and Manchester United matches were reality checks, but they could have been two or three down by the time they rescued things at Aston Villa.

“Liverpool have a huge amount of games coming up. Mohamed Salah was really average at the weekend, as was Roberto Firmino, so Jurgen Klopp may leave a couple out and change it up.

“The full-backs will stay the same and you have to leave Sadio Mane in, but Fabinho could also come back in.

“It is normally Firmino who he rests, but I would leave him in with Mane and leave Salah out. He may not like it but it needs to happen.

“Divock Origi and Alex Oxlade-Chamberlain will come in and I think it will be a fairly comfortable night nevertheless for Liverpool.”

Liverpool need a win tonight to maintain their hopes of progressing from Group E, with Klopp’s men having taken six points from their three matches played so far and currently enjoying a three-point cushion over second-placed RB Salzburg.