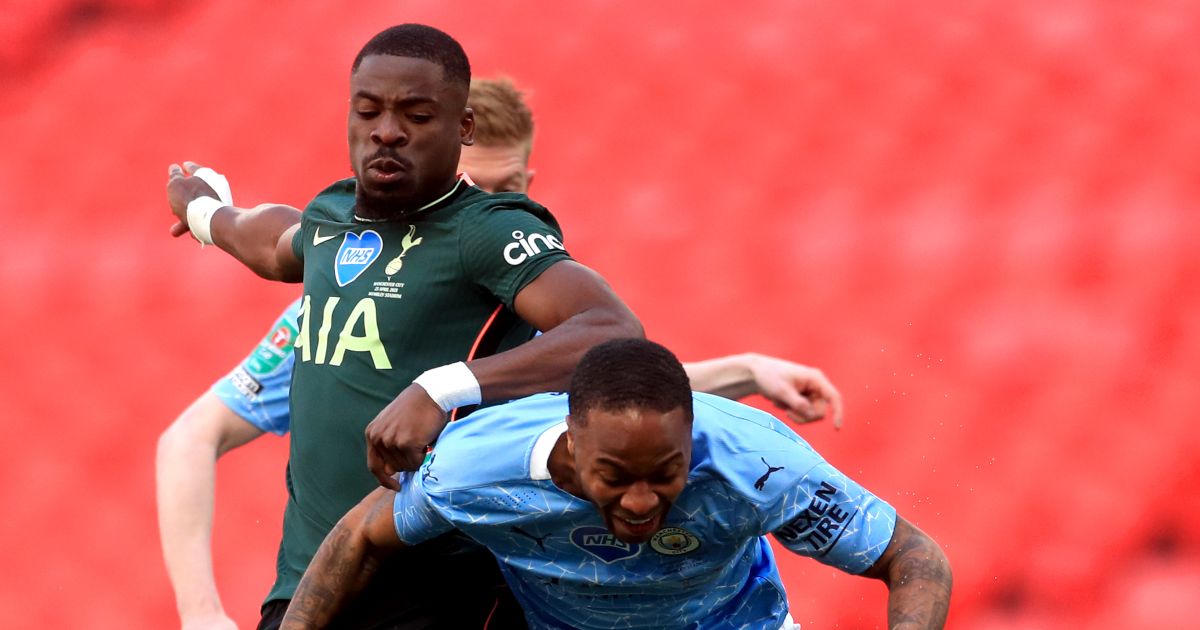 Serge Aurier will reportedly remain at Tottenham until at least January after the Premier League club failed to find a suitor for the right-back.

The Ivory Coast international was linked with a move to Paris Saint-Germain this summer after falling out of favour in north London.

He made 19 starts in the Premier League last season under Jose Mourinho and caretaker boss Ryan Mason – but has failed to play in any of their matches so far this term.

However, The Athletic claim that, despite expectations that Tottenham will complete a €30m deal for Emerson Royal from Barcelona today, Spurs ‘are no longer expecting to find a new club for’ Aurier.

‘Spurs have been looking to move Aurier on all summer but with only hours remaining in the window, Aurier is now expected to stay at the club, where he is now in the final season of his contract.

‘Matt Doherty, who arrived from Wolverhampton Wanderers last summer, is also expected to stay at Spurs.’

And former Aston Villa and Premier League striker Gabby Agbonlahor thinks Tottenham will be gutted they failed to offload the 28-year-old.

“It’s definitely a disaster,” Agbonlahor told Football Insider. “He wasn’t great at Paris Saint-Germain and Spurs rushed into the transfer.

“The amount of points that he’s cost them from poor defending and he’s not even that great going forward. For me, it was definitely a disaster signing. I’m sure they’ll be dying to get him out of the door.”

Meanwhile, Eric Dier thinks Tottenham “can still do more” despite their perfect start to the Premier League season that has seen them win three out of three matches.

Dier told the club’s official website: “We’re all really happy, most importantly to get the win before the international break, and finish with three wins (from the first three games). I think we can still do more, we can play better, probably we should have scored a few more goals today, but that will come.

“Watford have very good attacking players, they started well, we had to contain them a little, we didn’t start the best.

“We controlled the game throughout, really managed to nullify their counter-attack, and that’s down to our positioning, especially our midfielders. Skippy and Pierre have been fantastic in all the work they do, so, yes, it’s been a good start.

“We’ve had very different games, and this was the first one where we had a lot more control. We want to build on that and have more control in every game.

“Within the three games, we’ve kept our principles, and our principles are the same, the manager really emphasises that, and we know together, as a unit, we can be very strong.”