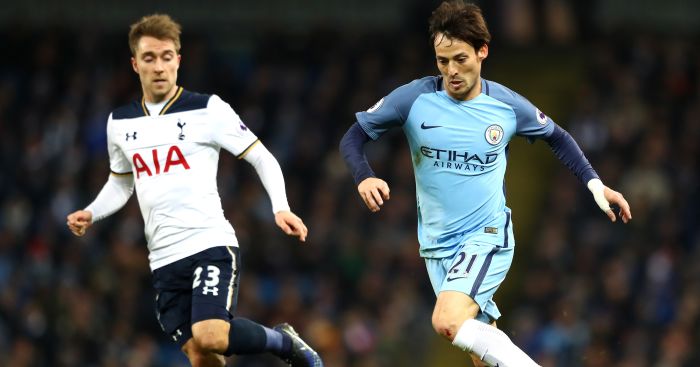 Sky Sports pundits were asked to pick between Manchester City’s David Silva and Tottenham’s Christian Eriksen as they attempt to select their combined XI ahead of next Monday’s clash.

The Citizens travel to face Spurs at Wembley with Mauricio Pochettino’s side given the opportunity to leapfrog their title rivals with a victory.

It’s tight at the top of the Premier League table with two points separating Manchester City in first and Tottenham in fifth.

And to preview the fixture on Monday, Sky Sports have been asking their pundits to name the best combined XI – with playmakers the position to choose on Thursday.

Silva or Eriksen? That was the question put to Phil Thompson, Matt Le Tissier, Paul Merson and Charlie Nicholas with the result an overwhelming 4-0 to Silva.

“Silva all day long, I do not think anybody in this position, No 10 or whatever you want to call it, is as good as Silva is,” said Thompson.

“This is very tough as these are two of my favourite players to watch in the Premier League as they have both got tremendous skill and make the game look so easy,” Le Tissier said before opting for Silva.

Merson took a slightly different view but with the same answer: “I’ll go for Silva but Eriksen is more important to Tottenham than Silva is for City.”

Before Nicholas made it a full house: “Two very talented players but Silva has just been brilliant since the day he walked into Manchester City – he’s one of the finest we have ever seen in the Premier League.”