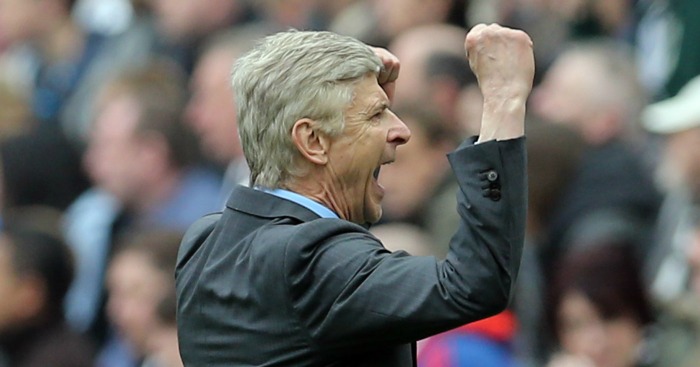 Arsenal, as any sentient being will already know, have qualified for the Champions League in each of the last 20 seasons. To do so they have finished first three times, second six times, third five times and fourth six times, all of the latter coming since 2006. That’s six fourth-place finishes in 11 seasons. During their medal-free years it became a running gag that Arsenal would win that fourth-place trophy, something that caused most Gooners to roll their eyes. But alas for them, it was their manager who provided the punchline.

A few years ago, Arsenal AGMs could get a little spicy. The frustration of the stagnant years post-2005, while they were paying for a new stadium but repeating the same old disappointments and let-downs, never quite good enough to win anything but never quite terrible enough to force a change at the top. But every year, Arsene Wenger would appear in front of the shareholders, alongside Ivan Gazidis and Peter Hill-Wood, and offer some rather thin explanation of why they couldn’t spend any money because they were paying for those comfy seats at the Emirates. That then morphed into how they actually did have a massive silo of cash in which Gazidis swam every morning, but for reasons unclear they couldn’t spend it. All the while, they would maintain a sort of Comical Ali-lite facade, patiently explaining to the huffing hordes that actually everything was actually going quite well, actually.

At the 2012 AGM, Gazidis and ‘Silent’ Stan Kroenke were heckled by the shareholders present, one accusing them of “ruining the club” with their ‘long pockets, short arms’ approach to running a football club. Wenger was received slightly more favourably, even if he did come out with what you could all an ‘unfortunate choice of words’ to defend how the club was going about things.

If there was a PR person around, then they were probably cradling their head in their hands, despite the essence of what Wenger said wasn’t especially revolutionary. His message was basically ‘the Champions League is important’, and indeed he went on to clarify: “I say that because if you want to attract the best players, they do not ask ‘did you win the League Cup?’, they ask you ‘do you play in the Champions League?'”

The trouble was, it just sounded bad. Here was the manager of a team who hadn’t won a trophy in years, who people were saying didn’t have the stones to win a trophy, either admitting that actually they weren’t that fussed about winning a trophy, or making excuses for not winning a trophy. Sort of a souped-up version of the club who gets knocked out of a cup and claims it’s fine, because they can concentrate on the league. It just didn’t sound good, and confirmed the ‘against modern football’ notion that all people cared about these days was money, rather than the old-fashioned idea of glory.

What’s more, it wasn’t the first time Wenger had said it. In the February of the previous season, Arsenal had just been knocked out of the FA Cup, were 4-0 down to Milan after the first leg of their Champions League second round (they’d win the second leg 3-0 but go out) and were a whopping 17 points behind league leaders Manchester City. “The first trophy is to finish in the top four,” said Wenger, after the Sunderland game. “And that’s still possible. I believe finishing fourth is vital for us, so let’s focus on that.”

So this wasn’t an accident. It wasn’t Wenger misspeaking, or being wildly misquoted. This is what he thought. And, despite the opprobrium that was directed at him, he essentially wasn’t wrong. Finishing in the Champions League places – for reasons of finance, status, attracting new players or keeping fans – is more important to modern football clubs than a bit of silverware. This might not be ideal, certainly not romantic and it doesn’t square with the fan experience, that glory is the one true aim of the sport. But it remains true.

It’s fairly obvious. All you have to do is regard teamsheets in cup competitions to recognise where clubs’ priorities lie. Louis van Gaal agreed with Wenger, while he was at Manchester United, saying in 2015: “Yes, I think that he is right. I think that Arsène Wenger is saying always the right things. I think that for a club the Champions League is the highest level and that’s why he is saying. that. And to finish in the first four, it’s a fantastic result, I think, and for us, Manchester United, more I think.”

In essence, Wenger’s statement was only really worthy of mockery if you took ‘trophy’ literally, rather than seeing it as a euphemism for ‘achievement.’ Wenger, because of Arsenal’s barren (in the traditional football sense) years, was simply the wrong man with the wrong language conveying the right message. Not that it wasn’t still funny, you understand. We all have to laugh in this miserable world.