Home F365 Features Quote unquote: Beckham and the art of saying nothing 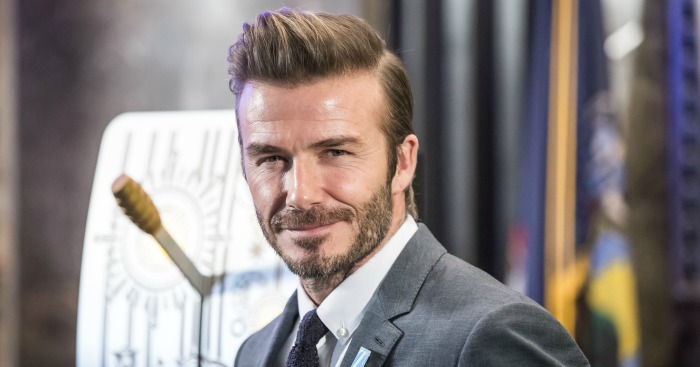 What’s your favourite David Beckham quote? Tough one. Broadly because there aren’t many. You may think of those potentially apocryphal ones that seem to suggest he’s a world-class dunce. The one about his parents always being there for him, ever since he was seven. Or the one about him and Victoria wanting to get Brooklyn christened, but they weren’t sure into what religion yet.

Most of the notable David Beckham quotes are from other people. “He can’t kick with his left foot, he can’t head, he can’t tackle, and he doesn’t score many goals,” once bitched George Best. “Apart from that, he’s alright.”

Victoria was the one who coined/popularised the ‘Goldenballs’ nickname. Zlatan Ibrahimovic, briefly his teammate at PSG, once said of him: “We were looking through his playlist in the dressing room – there was lots of Justin Bieber, Jonas Brothers and Selena Gomez. We were expecting some cool English rock bands and hip hop. It is nice to know that even David Beckham doesn’t have good taste in everything.”

Sir Alex Ferguson said a few nice, and not quite so nice things about him over the years, including the pointed zinger that he was the only player he’s known who “chose to be famous”.

But from Beckham himself, there’s not been much. It’s remarkable that someone who made his debut nearly 25 years ago and was the most famous footballer in the world for well over a decade (and actually might still be, despite having retired in 2013), has barely said anything of note in all that time.

Beckham, as has been written and lamented many times over those years, is more of a brand than a footballer, a money-making machine whose appeal rests in something slightly ephemeral. The most prominent is obviously his looks, a beautiful man who seems to be ageing rather well, despite his wife’s word of warning. “David looks good, that’s what David does,” she once said. “David looks good, and I’m the funny one, that’s what I hear constantly. But I keep telling him that looks fade.” Ouch.

Even for someone who dissolved from sportsman into walking billboard, it’s still fairly extraordinary that, in all the time he’s been part of the public consciousness, bearing in mind how often footballers are interviewed, put out statements and are asked for their opinion about the smallest things, that he’s basically said nothing of note.

That’s because Beckham is an absolute master of the art of talking without saying anything. Listen to him whenever he speaks: sounds are coming out, but they have very little real meaning, or very little notable meaning. But he’ll make you think he’s said something interesting, which when you’re as famous as Beckham, is enough to keep people interested. When asked his opinion about someone he’s played with – Luis Figo, say – he’ll be positive and effusive but with nothing you can actually pin on him. He will qualify statements either by saying “for me” before offering an obvious opinion, or say “one of” when asked about the quality of a player. “Figo is one of the best players I ever played with,” and so forth. It’s the sort of thing that initially sounds like it might be a strong opinion, but then after a moment’s pause you think ‘Well, of course he’s one of the best he ever played with…’

So why does he remain so popular? Being attractive and a very good athlete isn’t enough to achieve his level of fame, so he needs something else. And in Beckham’s case, that something is personalising himself just enough to give the impression that he’s a superdupermegastar, sure, but a normal guy too. Just enough so people can relate to him, even a little bit. His Instagram feed is a combination of assorted exotic locations and ostentatious displays of wealth, with a shot of him eating pie and mash in some earthy eatery thrown in every now and then. He somehow pulls off the trick of modelling in his pants and looking a little bit shy at the same time. He’s just like you, only better looking, richer and more talented.

Beckham was on Desert Island Discs this week, a programme on which the wonderful Kirsty Young’s gentle probing generally coaxes the odd personal revelation out of its guests. But this was classic Beckham. He provided some more of those little tidbits of normality and accessibility, including a rather sweet story about his early dates with Victoria which, because their respective representatives wanted to keep things hush-hush, took place in the car park of a Harvester.

But other than that we had more examples of the ‘banal statement that sounds like something revelatory’. He described the goal against Greece as “one of the best moments in my career”. Afterwards, stories were written about how Beckham ‘backed’ the investigations against abuse in football, but what he actually said was that he’d “like to think” everything that could be done, was being done to catch the perpetrators. Which, of course, is a laudable statement, but is so obvious it didn’t really need saying. Again, the art of talking without really saying anything, perfectly executed.

All of this reads like a criticism, but it really isn’t. Beckham is under no obligation to entertain any of us with what he says. He doesn’t have to be massively witty or smart. As the venerable scholar Paul Calf once said, you don’t have a go at Stephen Hawking for being shit at football. But he does have to be likeable, which he broadly is. Perhaps everything Beckham says is part of a carefully-constructed effort to present the image of a pleasant, identifiable man. Perhaps it’s not really him. Perhaps it is. Hopefully it is. But does it matter? Probably not.

Usually, Quote/Unquote looks at things that those in football have said. This week, it’s what one hasn’t. Beckham has perfected the art of being likeable because he never says anything that anyone can really disagree with. Like the notes that aren’t played in jazz, with Beckham it’s sometimes about the words he doesn’t say.