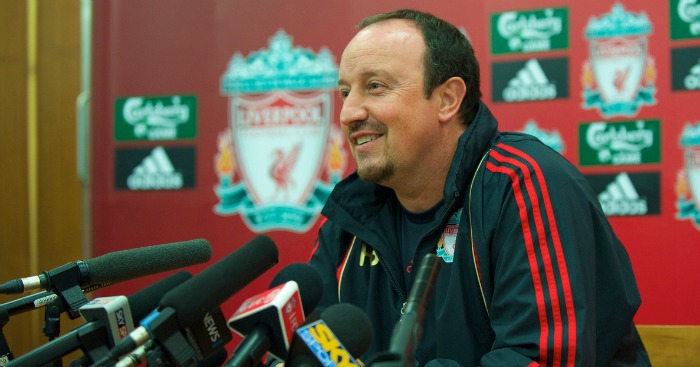 How do you define a rant? That’s one of those questions that has nothing to do with football, but if you ask it in the right company, at the right time and in the right context, you could lose an afternoon. It’s a question that was debated on many a forum and in many a comments section seven years ago, and one that became crushingly tedious very, very quickly indeed.

Was Rafa Benitez ‘ranting’ when he took out a piece of paper and started listing ‘facts’ about Sir Alex Ferguson? Well, the short answer is: who cares? But this is the name we’ve got: ask someone ‘Remember that time Rafa Benitez gave an ill-advised press conference after Alex Ferguson said something?’ then they might scratch their head for a short time. Say to them ‘Rafa’s rant’, and they’ll know exactly what you mean. It’s not ideal, but this is what we’ve got. So on we go.

You’ll recall that, in 2009, Liverpool were pretty good. That ‘lightning in a bottle’ magic they’ve managed to get a couple of times since their last title win was bright as all daddio, with Steven Gerrard just behind the most rampant Fernando Torres, a perfect midfield duo of Javier Mascherano and Xabi Alonso just back from them and, erm, Albert Riera and Dirk Kuyt on the wings.

By January they had lost just once all season and were top of the league, having just handed out a significant hosing to Newcastle, while Manchester United were not exactly struggling but dealing with a slightly sticky start to the season that left them lagging behind a little. United were in the middle of an 11-game winning run that, ultimately, rather than any ill-advised words by a manager, would prove decisive. Still, Fergie being Fergie, he couldn’t resist having a dig. Or, another dig, adding to all the other digs he regularly dug.

Speaking to the United programme, he said: “There’s no doubt that in the second half of the season they [Liverpool] will get nervous. With the experience we’ve got at our club, having won a couple of titles in the past couple of years especially, it helps you. There’s no doubt about that. They [Liverpool] are going into the unknown, and if you make mistakes, then you get punished.”

Oh Ferg, you card. This was the sort of thing he said all the time, and the sort of thing that actually stood up to some scrutiny. Liverpool were going into the unknown, sort of, and mistakes were likely from a side who, when the final scores were totted up and the respective resources assessed, the surprise was not that they eventually lost the title  but that they were ever really in with a chance of winning it.

A couple of days after Fergie’s words did the rounds, Kenny Dalglish (at that stage still merely a club elder and revered old sage) wrote a column for the Liverpool website in which he advised: ‘All I would say is forget about these mind games and concentrate solely on what’s going on around our own club. Whatever anybody else says is up to them but they won’t get into the minds of anyone at Anfield, that’s for sure. It may fill some column inches in the papers but it won’t distract us. The more others speak about Liverpool then the more worried they are.’

Ah. Yes. Erm. Hmmm. Well. Benitez’s press conference before the game against Stoke started innocuously enough, Benitez addressing injury news and transfer rumours with that half-smile that very often camped out on his face, like a man waiting to be given a Brut wash set as a Christmas present for the fifth year running. Usually, managers give the impression that they’d love to be anywhere other than in a press conference. Some are more comfortable than others, but almost all seem like they’ve got better things to be doing, which in almost all instances is absolutely true. You’d think that would be the case with Benitez, who apart from anything else was still recovering from an operation to remove kidney stones. This time though, he took a piece of paper from his pocket.

“I was surprised by what has been said, but maybe they [Manchester United] are nervous because we are at the top of the table,” Benitez said. He should really have left it there. Turned the cannon right back on Fergie. Call him out for that trick of when someone feels a negative emotion, they accuse their opponent of it. It’s a bit schoolyardy (“No – YOUR mum smells” etc) but it would have worked fine on this occasion.

As it is, Benitez started talking, and continued unbroken for a little over four minutes, a wide-ranging sweep through his Big Book Of Grievances, taking in Ferguson’s scrapes with the authorities, his gripes with the fixture list and scheduling, his confrontations with referees and how he seems to get away with them and assorted other public statements. At a couple of points Benitez tries to crack a gag, joshing that Luis Felipe Scolari will “have to try zonal marking” in the technical area because of how the United staff behave. Those who have worked with Benitez say he can be quite a warm, funny bloke, but on this occasion he looked like a man who’d just had the concept of humour explained to him for the first time, and was giving it a tentative spin.

The transcript is here, and if you fancy watching it through your fingers, the clip is here. He only actually says the word ‘fact/s’ six times, which in four minutes doesn’t seem excessive, but it still sounded like a man howling at the moon, a YouTube conspiracy video made flesh and, alas, given a microphone. Benitez looked relatively pleased with how it had gone at the end, but not everyone felt the same way.

‘I went home from training that Friday lunchtime and switched on the TV,’ Steven Gerrard wrote in his autobiography. ‘Rafa sat down with his usual half-smile. It looked likely to be a normal press conference, but then he reached into his pocket for a piece of paper….It seemed so unlike Rafa to talk in such an emotional way. You could see the anger in him…Rafa was sounding muddled and bitter and paranoid. He was humiliating himself. It was a disaster. I couldn’t understand Rafa’s thinking in wanting to take on Ferguson, a master of mind games, when we were sitting so calmly on top of the table early into a new year.’

Ferguson, apparently, laughed and laughed, announcing “I’ve got him! I’ve got him!” to his United players, but in his own autobiography he was slightly more measured. ‘We received a tip-off that Liverpool would stage-manage a question that would enable Benitez to go on the attack,’ he wrote. ‘The media loved it, even though the facts were inaccurate. They were hoping it would start a war, that I would launch a rocket back. In fact, all I said in reply was that Rafa was obviously ‘bitter’ about something and that I was at a loss to explain what that might be.’

Butter wouldn’t melt. Benitez didn’t get much support, beyond Liverpool fans: debates were had, columns were written, and the infamous ‘Rafa’s cracking up’ chant soon became a t-shirt. The Telegraph called in a sports psychologist, who solemnly noted that “the fact that Benitez has got chapter and verse written down shows that he is so wound up that he is determined to get everything off his chest.”

But one voice backing him up was Graham Poll. ‘Rafa Benitez has articulated what referees have been thinking for years – that Sir Alex Ferguson can say what he wants about them and the FA will allow him to get away with it,’ Poll wrote in his Daily Mail column, although quite whether support from Tring’s most numerically challenged referee is a good or a bad thing, is up for debate.

But quite apart from the usual posturing and nonsense, the real issue is whether this had any substantive impact on the title race, something discussed almost as much as whether it was a sodding rant or not. The answer to that is: depends on who you ask.

When Benitez unsheathed his list, Liverpool were seven points clear of United (in third, Chelsea were second), who had two games in hand. Liverpool then drew four of their following six games, and by the end of February they’d been knocked off top spot, never to return. Thus, Benitez’s ramble had thrown them off course, right? Well, maybe: it’s also worth noting that Liverpool had also drawn four of the seven games before the press conference, so if you’re taking a clutch of draws as the sign of wheels coming off, the nuts and bolts had already started to loosen. Additionally, they only dropped two points in their last 11 games (the draw being that madcap 4-4 against Arsenal, when Andrey Arshavin did absolutely nothing except score all four goals), so can you therefore really attribute the failure of a title bid to one slightly ill-advised press conference in January?

It’s probably more accurate to say United were simply a machine. With Cristiano Ronaldo in his final season at Old Trafford, they bulldozed most teams they came across, barring a two-game blip in March when they lost to Liverpool and Fulham. Perhaps the sight of Benitez getting riled up motivated United a bit more, but surely it’s a more convincing argument to say that United had a near-impenetrable defence, and arguably the most potent attacker in the world. That sort of thing is usually enough to win most titles. Sure, it was undignified, probably unwise, certainly entertaining and might have had some impact on the season. But not that much.

The other big issue discussed in that press conference was Benitez’s contract negotiations. “My agent has not yet received any documents, and he is a little disappointed,” he said. “But we will see what happens. I do not want to say too much at the moment.” If only, Rafa.