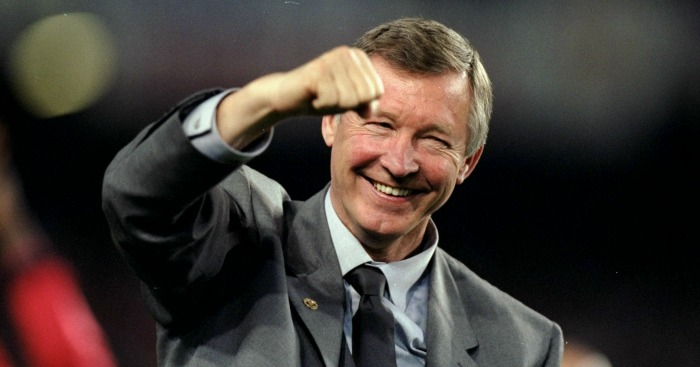 Sir Alex Ferguson certainly had a nifty turn of phrase. Entire books have been written on that premise. When he retired, you could barely move on the internet for compilations of his best quotes. And he becomes the first person to receive the prestigious recognition of having two editions of Quote/Unquote dedicated to him.

As well as his speech often being nifty, it was also often rather brusque. Instances of him inviting targets of his ire to, in no uncertain terms, do one, are frequent and notorious. He could quite often be rather un-PC. We’re not talking Jeremy Clarkson, tell-it-like-it-is, straight-up unpleasantness, but he was definitely fond of what we’ll charitably call ‘broad generalisations’.

“It’s strange for a country like Holland to call us arrogant,” he once noted when a Dutch journalist asked him about resting players for a Champions League game. “You’re not short of it yourself.” When Rafael was given a red card against Bayern Munich in 2010, he said: “They got him sent off, everyone sprinted towards the referee, they forced him to get his card out. Typical Germans.” And a slightly more localised remark came in 2005, discussing Wayne Rooney’s temperament by musing that “everyone from Liverpool has a chip on their shoulder”. It’s a bit like someone’s dad being asked why he didn’t like the French, and responding: “Well, it’s because they’re French, isn’t it?”

The most famous of this sub-genre of Ferg quotes came in 1999, before their Champions League quarter-final against Inter. The build-up to the game was broadly dominated by the prospect of David Beckham and Diego Simeone facing each other for the first time since the previous summer’s World Cup. What would happen? Would Beckham, halfway through his transformation from effigy fodder to nation’s sweetheart, lash out at his foe? Would Simeone take the Keyser Soze approach and show this man of will what will really was? In the end, Beckham played quite well and United went through. Not the most eventful of subplots.

Perhaps more interesting was the question of whether Ronaldo would play for Inter. The Brazilian was that season suffering the first twinges in his knee, the precursor to the injury that would derail his career for the better part of three years. That February he met with a knee specialist in Paris, but because the pain in the knee came and went without any real pattern or obvious cause, he was advised to play on without surgery. The United game was in early March, but he’d been out of the side since the middle of January, results had understandably suffered and Inter had built their hopes around him returning to fitness for the trip to Old Trafford. “Taking the field without Ronaldo is like leaving home in winter without an overcoat,” said Simeone.

“In the last seven months there have been lows and highs,” Ronaldo said the week before the United game. “One day I feel better, one day I feel worse. But one thing is for sure, since the World Cup I haven’t played a single match without feeling a lot of pain.” At the last domestic game before they left for Manchester, against Lazio, Ronaldo was pestered about the state of his fitness. “I’m not playing [today] and I’m not talking,” he said, rather curtly.

When they travelled, they did so without Ronaldo, and while they sought special dispensation from UEFA to fly him to England on a private jet should his knee respond to last-minute treatment, they maintained he wouldn’t play. Ferguson was sceptical. “I will wait to see their team,” he said. “I think they want Ronaldo to play, but it is down to him and his doctor whether he does. I hear he is coming over on a private jet with their owner, Massimo Moratti. Well, I hope Moratti is playing.”

And then, the line. “I’m not convinced that Ronaldo won’t play. The Italians are the innovators of the smokescreen. When they tell me it’s pasta, I still check under the sauce to make sure.” This was said, wrote those who were in the room at the time, with a smile, a wink, a little nod to let everyone know that this was the playful version of Fergie. The one who indulged in a little light badinage every now and then. Jocular Fergie. Banter Fergie. Actually, scratch that last one. That’s hideous.

But it was still all part of the whole performance, and belied Ferguson’s fear of the Brazilian. ‘[He] had been on my mind for weeks,’ Ferguson wrote in his first autobiography. ‘At his best, he could destroy any defenders in the world and I had to try to prevent our lads from becoming overawed by the thought of what he might do to them.’ Presumably Ferguson keeping alive the possibility of him playing when he probably wouldn’t, was preferable to letting his team think he wouldn’t, when he might.

In the end Ronaldo did indeed not play in the first leg, which United won 2-0 thanks to a couple of goals from Dwight Yorke. He did return for the game in Milan, a 1-1 draw, but only managed an hour, half-fit and according to Ferguson anyway, half-interested. ‘Ronaldo may have been in the blue-and-black stripes of Inter but not all of him was there,’ Ferguson wrote. ‘He looked vacant, utterly uninterested in the happenings around him, as if he didn’t want to be in that place at that time.’

That wasn’t the end of it all though. While the “pasta” quote has gone down in English history as a classic example of Ferguson’s sly wit, UEFA took a rather more dim view. He was fined 5,000 Swiss francs,about £2,100, for that and a suggestion that the Italian side would indulge in “scheming, diving, referee-baiting – the full repertoire”.

“This was unnecessary provocation of the opposing team, and we cannot accept racism of any kind,” chided a UEFA spokesman after handing down the fine. “We will be watching closely. If Mr Ferguson makes any of the comments again prior to the [semi-final] against Juventus, then we would be forced to open up another disciplinary action against him.” Inter coach Mircea Lucescu, who resigned straight after the second leg, called it a “a sad thing and a bad thing”.

Political correctness gone mad, innit? Well, not really. UEFA had a point. It’s fairly basic xenophobia, and it was pretty weird that Ferguson seemed to get away without significant criticism. But that would spoil a memorable line. And as we know, football is more than happy to turn a blind eye to these things.