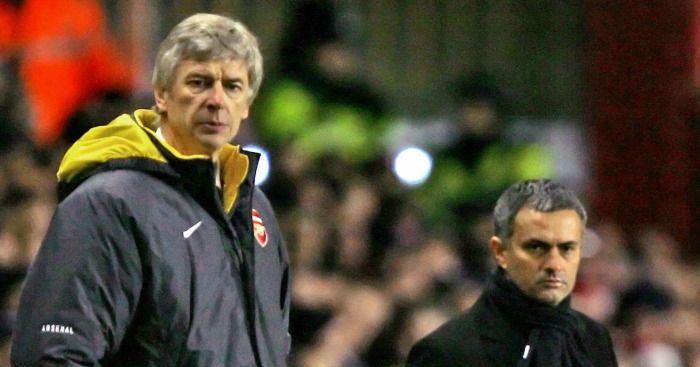 It might be a little thing, but after Manchester United’s past two games, Jose Mourinho did not attend his post-match press conferences. After the draw with Burnley at the weekend he sent in Rui Faria, his ever-present yapping assistant, whereas after the Manchester derby in the League Cup, he simply didn’t show up because the rules didn’t oblige him to. Which is fair enough: plonking oneself down in front of assorted journalists, on deadlines and sometimes irritable, is few people’s idea of fun, and nobody should think less of him for skipping it occasionally.

But the difference is, it used to look like fun for Mourinho. Before – and we’re not even talking at Porto or the first time round at Chelsea, but the second too – he actually did seem to enjoy it, relaxed and convivial, enjoying the attention, enjoying the fact that whatever line he spun would be reported and analysed and discussed the next day.

Those were the days when Jose Mourinho looked like he was revelling in life as a manager, that this was his true calling and didn’t yet look like a man no longer sure of his place in the world, like an accountant on the brink of a career crisis, considering following his true love and go back to teaching sculpture at night school. He looks like a man doing a reluctant, vaguely passable impersonation of Jose Mourinho, though his heart isn’t entirely in it.

Back in 2005, he was very much Jose Mourinho. He used those press conferences as if they were weaponised, to send messages with outrageous statements or maybe just annoy people for his own amusement, but sometimes even he knew that he had overstepped the mark. Like the time he responded to some fairly innocuous remarks from Arsene Wenger about Chelsea’s form by calling him a voyeur.

At the start of the 2005/6 season, Chelsea were flying, having won their first nine league games, but a draw with Everton at Goodison Park then defeat to Charlton (at that point still a top-flight team) on penalties in the League Cup prompted a couple of questions about their confidence, mentality and, well, stones. Wenger, the day before Arsenal played Tottenham (a game they would draw 1-1) was reported to have said Chelsea had lost “the big belief because they could not win those two games”. Really he had been slightly misquoted, and actually said “a little belief”, but it was enough to set Mourinho off.

Following Chelsea’s game that weekend (a home win over Blackburn), Mourinho had carried out most of his media duties, before speaking with a few journalists from the daily newspapers, specifically the Daily Star and the London Evening Standard. He was asked about Wenger, from the sounds of it almost as an afterthought, but after he opened his mouth the journalists saw headlines spinning in their eyes, like dollar signs in a cartoon character.

“I think he is one of these people who is a voyeur,” said Mourinho. “He likes to watch other people. There are some guys who, when they are at home, have a big telescope to see what happens in other families. He speaks, speaks, speaks about Chelsea.

“It bothers me because the guy is speaking all the time. We never speak about them. You can do it when you are top and you have a big morale. When you are on game number 11 and you still can’t win away from home, and when you are without Thierry Henry and he can’t win a game, he should be worried about them.

This was classic early Mourinho. You had the calculated, deliberate attack, the sledgehammer-subtle comparison between his record and a rival’s, and of course the memorable line, the quip he knew would stick in everyone’s minds. It seemed both an afterthought and a premeditated line.

“Wenger’s remarks hadn’t actually made much of a big story so Mourinho had clearly been looking out for it,” said David Woods, the reporter from the Star who was there, in John Cross’s book about Wenger. “It seemed pre-planned because he had obviously had enough of Wenger having what he saw were constant digs at him and Chelsea and this small insult was the final straw…I remember, after Mourinho had spoken and had spoken at length, asking him another question. Mourinho replied: “I think you have got enough.” It seemed as if…he knew it would hurt Wenger.”

And it did. Wenger was so perturbed that he discussed taking legal action, and while he eventually had no cause to call in the lawyers, he was obviously upset. “He’s out of order, disconnected with reality and disrespectful,” was his retort shortly afterwards. “When you give success to stupid people, it makes them more stupid sometimes and not more intelligent. I was asked a question about Chelsea and gave my honest answer, just like I expect any other manager to do when he is asked about Arsenal.”

At his next media briefing, Wenger was clearly profoundly unhappy. Cross wrote: ‘It was not helped when one reporter, Matt Scott, insisted on asking him whether he really owned a telescope. When he wouldn’t answer at first, Scott repeated the question. Wenger looked utterly bewildered. ‘No, no, Arsene, do you really own a telescope?’ was the question that really tipped Wenger over the edge. He looked incredulous and turned his head away in disgust.’

Mourinho doubled down a few days later, claiming to have a ‘dossier’ of Wenger’s comments about Chelsea. “We have a file of quotes from Mr Wenger about Chelsea in the last 12 months – it is not a file of five pages,” he said. “It is a file of 120 pages, so we have a very strong reaction. My objective is that it is enough. He has talked enough about us. He has said some very strange things about Chelsea Football Club. We have a very strong answer. I accept his next answer being strong but it is time to stop because if he doesn’t stop, we are there for the fight.” All of which suggested that if there was one manager obsessed with the team of another, it wasn’t Wenger.

For Mourinho’s part, he actually recognised he had crossed a line and tried to make nice, to an extent. He sent Wenger a personalised Christmas card with an apology, the authenticity of which was subject to some question. Arsenal checked with Chelsea that it really had come from them, which is when things got really silly, as Mourinho interpreted this as some sort of snub, and thus refused to shake hands with his rival in the game between the two shortly afterwards. “I appreciated the sentiment in the card,” said Wenger. “I find it ridiculous. This card has been treated like a CIA bomb. I couldn’t understand Chelsea’s reaction. I am sorry but I didn’t want to show any discourtesy.”

Still, Mourinho did apologise in a less ambiguous manner in December. “If I could go back I would say ‘hey, it’s time to stop speaking about Chelsea, go to your own corner and speak about your own team,” he said. “But I wouldn’t say what I said about him that hurt him. I didn’t intend that. If I could go back and change it then I would.” Years later he expressed further contrition. “I’m sorry for that,” he said in 2014. “So sorry for that.” Of course, that apology was perhaps slightly devalued as it came a couple of days after he’d called Wenger a “specialist in failure”. Old habits and all that.

But, as silly as it all was, this was Mourinho being antagonistic for a purpose. It was part of an abrasive but focused personality. Back then, reacting to him was simpler: if you were entertained by him you could feast on moments like this, and if you hated him you could do so purely, and without reservation. These days it’s a little murkier. You can still be entertained, but he no longer has his A-material. You can still hate him, but there’s enough of a faintly tragic whiff to make you feel sorry for him. Most of us would probably prefer the old Mourinho back.

Well, most, except Arsene Wenger.