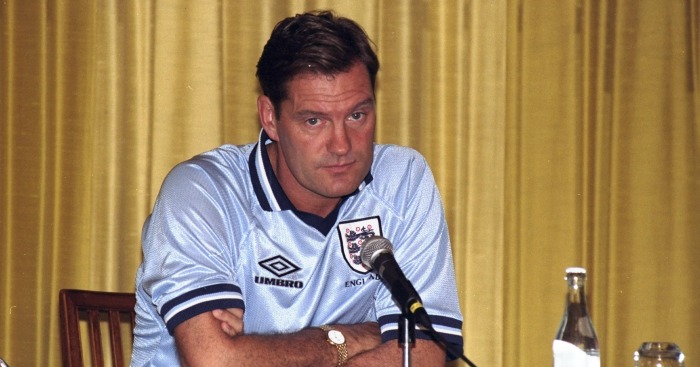 As 1998 came to an end, the FA surveyed the state of the national team and its manager and decided that some PR was required. England had – after being knocked out of the World Cup by Argentina – struggled at the start of the Euro 2000 qualifying campaign, losing to Sweden, drawing a stultifying game against Bulgaria and completing the bare minimum formalities by beating Luxembourg 3-0.

Add to that the manager’s occasionally frosty relationship with the press, an ill-advised World Cup diary that broke the sanctity of ‘what goes in the dressing room, stays in the dressing room’ as well as his associations with a faith healer, and it was decided that the manager should speak to a couple of newspapers in order to smooth things over ahead of a friendly against world champions France.

And that’s how Glenn Hoddle came to tell the Times that disabled people were being punished for sins in a previous life. As charm offensives go, it could have been better. “I can’t claim this joke, but someone else said he forgot the charm and went on the offensive,” says Matt Dickinson, the journalist to whom Hoddle made the infamous proclamation that would ultimately cost him his job.

MEDIAWATCH: Why Liverpool must sign a new left-back and centre-half

In another of those quirks of fate/vagaries of working life at national newspapers, Dickinson probably shouldn’t even have been the man on the other end of the phone. Oliver Holt was the chief football writer for the Times at that time, but he was away on another assignment, so the task was passed to Dickinson: if Holt was around, who knows whether he would’ve asked the same questions, or phrased them differently, or whether Hoddle would have taken up the topic so readily. A butterfly flaps its wings in Wapping and a man keeps his job at Lancaster Gate.

Dickinson went into the interview looking to cover a range of issues, from the upcoming fixture, to relationships with his players, but also some intriguing spiritual views that Hoddle had touched upon in a recent radio appearance. “I just thought I’d throw that in, just as an interesting, quirky line that someone had mentioned,” Dickinson says. “If he developed that, I thought it might be an interesting insight into how he thinks.”

You will probably recall the general theme of what Hoddle said, but here’s the full quote, apparently quite readily embarked upon after an initial question from Dickinson that began, “Your self-belief stems from your religion…” And with that, Hoddle was away:

“My beliefs have evolved in the last eight or nine years, that the spirit has to come back again. That is nothing new, that has been around for thousands of years. You have to come back to learn and face some of the things you have done, good and bad. There are too many injustices around.

“You and I have been physically given two hands and two legs and half-decent brains. Some people have not been born like that for a reason. The karma is working from another lifetime. I have nothing to hide about that. It is not only people with disabilities. What you sow, you have to reap. You have to look at things that happened in your life and ask why. It comes around.”

Hoddle also discussed Eileen Drewery, Emmanuel Petit and Alan Shearer, but oddly enough they didn’t make the headlines. “I can’t say I knew at that point, or even as we went to press, I thought I was torching his England job,” says Dickinson, but Hoddle’s fate was fairly clear once the papers hit the shelves. The story was on the front page of the Times, and by the time most people were wandering into their newsagents that Saturday morning, it had made the front pages of most other papers too.

Some called for his sacking straight away. Tony Banks and Tony Blair, ministers sport and prime, condemned him. Some defended his right to free speech, and claimed that what he’d said wasn’t that bad after all. Some questioned why the England football manager was even being asked about such matters, despite him having freely discussed them before.

Hoddle’s reaction was to deny things, but in various stages: first he stated that “at this moment in time, I never said them things”, then tried the customary route of someone in trouble and maintained his words had been taken out of context, or misinterpreted. Quite how essentially saying disabled people deserve it could be interpreted in a positive manner is unclear, but when that didn’t work he claimed he believed he was talking off the record. According to Dickinson, there was no suggestion of that at the time. “I didn’t want to force an apology out of him, but I thought he would handle it…shall we say, more elegantly and honestly than he did. If he was going to survive, maybe he should’ve explained it or put it in context, rather than pointing the finger at me…I got a call from someone pretty senior at the FA who said the one thing they never doubted was that he’d said it. Because he’d said not dissimilar things before, in public or in private.” Dickinson went on to write another piece explaining how the interview came about, what was said and how, after Hoddle’s various accusations of a stitch up. ‘I expressed surprise at the remarks,’ he wrote, ‘and he was surprised that I should find them at all startling.’

The FA went into damage control mode, and Hoddle was wheeled out to give more interviews – perhaps not the wisest move considering that’s what got them in this mess in the first place. “The man asked me about reincarnation,” he told Sky News, “I tried to give him an example…some people are born disabled in life, and other people [aren’t].” He even tried the old ‘some of my best friends…’ line, telling ITN about charity work he had done with disabled people. “All the work I have done over the years – 25 or 26 years – is there for everyone to see. There are a lot of things privately that I am not going to get involved in because I don’t think it’s the right time to bring it up.”

A fairly conclusive 84% of respondents to a television poll said Hoddle should resign, which he initially refused to do. “I am not going to resign over this because at the end of the day I didn’t say those things,” he said, if nothing else proving there’s no situation in which some footballers will not resort to cliché. He then rather undermined the denial that he said those things by admitting he said exactly those things. “The reporter from the Times did not misquote me but he did misrepresent me,” he told the Daily Mirror, while conspicuously failing to convincingly explain exactly what a correct representation would have looked like.

By Tuesday the FA big cheeses, including chairman Geoff Thompson, the acting chief executive David Davies and technical director Howard Wilkinson were meeting to decide his fate. Some reports suggested that he was offered a way out, that if he severed ties with Eileen Drewery, he could stay. He refused, and despite a last-ditch attempt by his daughter, who wrote a letter to Ceefax arguing her father should keep his job, karma was delivered on Wednesday.

“After more than 24 hours of meetings and discussions it became apparent to all those concerned that this was the right decision for England football,” Davies told a bunfight of a press conference. “The position had become increasingly untenable for both the FA and Glenn Hoddle, who accepts he made a serious error of judgement and of course he has apologised.” Hoddle did indeed apologise, after a fashion, accepting that he “made a serious error of judgment in an interview which caused misunderstanding and pain to a number of people”. And with that, he was gone.

As for Dickinson, when Hoddle got the Southampton job almost exactly a year later, the mischievous Times desk sent him along. After Hoddle reiterated his stance that he’d been done over, Dickinson felt the need to defend himself. “We ended up having a squabble that Rupert Lowe had to dive in and move the conversation on.”

But since then, the two have not encountered each other. “One of my colleagues did ring me up with amusement one time to say Hoddle had declined an interview with him,” says Dickinson. “He’d asked ‘is that because you don’t want to speak to the Times?’ and Hoddle said ‘No, I’ve only got a problem with one journalist at the Times, and he’s going to get what’s coming.’ I await the thunderbolt of retribution.”