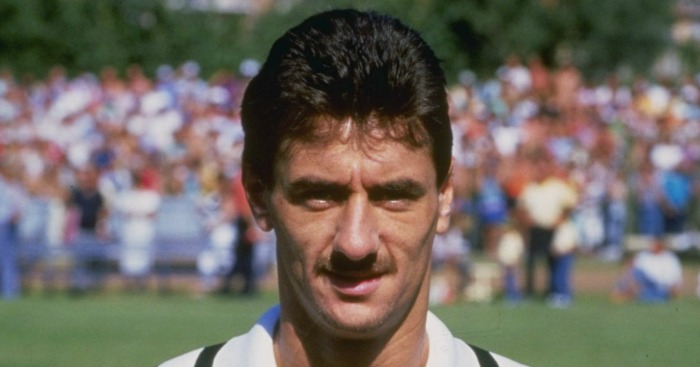 We all usually remember what was said, and who said it, but the ‘why’ and ‘how’ sometimes gets lost in time. Here’s our latest look at the most famous quotes from football past…

When you hear someone use the phrase ‘confirmation bias’, the temptation to give them a sound thrashing with a wet slipper is strong. It is, after all, merely a rather flowery and perhaps pretentious way of saying something pretty simple: that basically you believe what you want to believe, and interpret evidence to suit your own conclusions.

The theory is sound, of course, in spite of the pseudo-academic terminology, and it’s part of the reason that some myths become regarded as fact. So, as we like to believe that a) footballers are a bit thick and b) British players have a pathological aversion to playing abroad, we are perfectly prepared to believe, for a little while, that Ian Rush really did say that his time in Italy was “like living in a foreign country”.

In 1986, British footballers were big business. The European ban on British clubs removed one of the key motivations for staying at home and eschewing the money from the continent. The game in England was hardly awash with cash, and even the best side in the land, Liverpool, were hard up. So when in 1986 they needed to rake in a bit of extra cheese by selling their star centre-forward, there was no shortage of takers.

Napoli were said to be interested, but their bid to pair Rush with Diego Maradona foundered after approaching Rush directly, rather than Liverpool first, so Juventus and Barcelona both nipped in to make offers. Despite Barcelona offering more money (to both club and player), Rush chose Juventus, writing in his autobiography that he at least in part opted for them so, after Heysel, he could ‘give the people of Turin something back, not anything that would erase the pain they felt, but something, I didn’t know what, that was positive’.

The deal was done in 1986, but Rush stayed at Liverpool on loan for another season, and the idea of him leaving Anfield was, to say the least, not well-received. A campaign was set up called ‘Rush Must Stay’, which proposed adding 25p onto the cost of every match-day ticket to raise the money required to persuade him to stay. A nice gesture, but that would have raised only about a quarter of the money Juventus were offering him, reported to be a then-lavish salary of around £800,000. “Rush is worth £10million,” said the campaign’s spokesman Jimmy Taylor, a fee that presumably seemed utterly outlandish at the time, but now is rather reminiscent of Dr Evil going big and asking for one meeellion dollars.

The general perception is that Rush was a minor calamity in Turin, something he’s repeatedly insisted wasn’t the case. “My time at Juventus improved me in every way, both as a person and player,” he told the Observer in 2005. “I didn’t do as badly as everybody tries to make out, either. I scored 13 league and cup goals in my only season and was top scorer at the club. Most importantly, though, it means I can look back on my career and not wonder about what might have been.”

Still, it wasn’t exactly peaches and cream throughout his year in Italy. The Guardian reported he looked ‘frustrated and confused’ upon his debut; in his autobiography he wrote of seldom being happy and at one stage he was fined for disparaging comments he’d made in The Sun (this was pre-1989, of course) about how the club was run. In February, Juve manager Rino Marchesi declared: “Rush does not fit in, he does not communicate.” By the start of the 1988/89 season Liverpool bought him back for slightly less than they paid for him (shortly after which Rush’s mother-in-law was moved to deny reports that nights on the sauce in Turin were the reason for his sale), and here’s where the ‘legend’ began.

Rush has actually told slightly different stories about the origin of the quote over the years. “I was set up,” he told the Observer. “It was someone’s idea of fun – probably one of my Liverpool team-mates joked that I’d said it and things went from there.”

However, in his autobiography he had a slightly more specific idea of the culprit. ‘After the press conference a reporter cornered Kenny, hoping, I suppose, to get some sort of story or quote that had been denied to everyone else, and asked him what I had said in private about my time in Italy. “He said playing in Italy was like playing in a foreign country,” replied Kenny, tongue in cheek. It was another of Kenny’s impish wind-ups. The reporter, of course, took Kenny’s words as gospel.’

You can see why the reporter in question might have faithfully scribbled down what Dalglish said, firstly because his humour is famously bone-dry, but also because in 1988 – or any year, really – when Kenny Dalglish spoke, on Merseyside everyone listened.

But the spread of it beyond that…well, that’s on the rest of us. The quote has dogged Rush for the last quarter of a century, painting him as some sort of parochial dunce, slack-jawedly belching out something that’s either nonsensical, or a parody of the Little Britainer. No matter how many times he’s denied it and explained the story, it will always pop up on one of those ‘funny football quotes’ lists, a Colemanballs for the ages, an amusing slice of ‘durrrr’ that someone will jab you in the ribs and say ‘You know what Ian Rush said about Italy….’

Everyone wants to believe the funniest version of history, which is understandable, or that footballers really are that stupid. And hey, perhaps they are. Just not in this case.