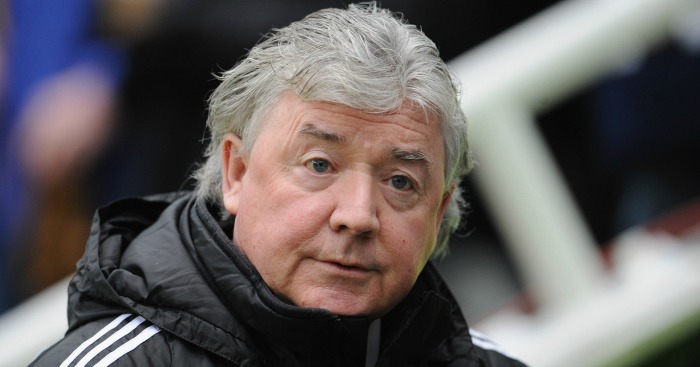 Journalists being given a telling off by a manager is not an uncommon event in football. Any correspondent who covered Sir Alex Ferguson will probably have a tale of a tongue-lashing: the purpose could be to try and limit negative press coverage, scare the scribe in question or something else, but usually these things are kept behind closed doors. Not in the case of Joe Kinnear, though.

The announcement that Kinnear had taken over as interim Newcastle manager came early one Friday afternoon, in September 2008. BBC Radio 5Live announced it during their sports panel show, and rather than the usual murmur when surprise news like that is revealed, the journalists in the studio all burst out laughing.

But while this was a joke, for Newcastle fans it was a bad one, especially since Kinnear – who hadn’t worked since setting Nottingham Forest on the road to relegation to League One in 2004 – replaced the sainted Kevin Keegan, who walked out a few weeks earlier because of the shambolic way Mike Ashley was running the club. Bringing Kinnear in seemed less a football move, more a bizarre attempt to prove Keegan’s point. The rest of the country was laughing, but those on Tyneside most definitely were not.

Kinnear only expected to be in place “for six to eight games” while Ashley tried to find a buyer for the club, so it was rather a surprise when he announced that, after they lost to Blackburn that Saturday, the players would get a couple of days off and Kinnear wouldn’t start working with his team until the Tuesday. As one might expect, a few newspapers made hay with this decision, with which Kinnear was…not pleased.

There was a press conference that Thursday, and after speaking to radio and television, Kinnear headed to an audience with the written press, who had been tipped off that a storm was coming. “He was wandering round with the cuttings, so we thought ‘Oh, there’s something wrong here,’” says Simon Bird, the Daily Mirror’s north-east correspondent. “He walked in, literally four strides into the room, hadn’t even sat down, and said ‘Which one’s Simon Bird? You’re a c*nt.’” As introductions go, it’s certainly one of the more emphatic ones.

Niall Hickman, of the Daily Express, was the next in the firing line, declared “f*cking out of order” and told to “f*ck off and go to another ground” should his editorial line continue. There followed an avalanche of invective, a press conference that lasted around half an hour and included, by Bird’s count, 52 swear words and in an initial six-minute opening salvo, a curse every six seconds. The two journalists were declared “negative b*stards”, when Kinnear was asked how long his contract was the questioner was informed that detail was “none of your f*cking business” and when Bird queried what more important things Kinnear was doing that Monday rather than meeting and training his players, he responded: “What are you? My personal secretary? F*ck off.”

The full transcript is available to read here, and it really is quite something. It is of course not actually the profanity that is especially shocking here: there’s little point in anyone who’s been to a football match clutching their pearls and thinking of the children where bad language is concerned, after all. It’s more the extraordinary sight of a Premier League manager’s first real public action in a new job being to settle personal scores with the media. For the manager of a club with Newcastle’s PR to quite literally call the people passing his words to the public “c*nts”…well, it was a maverick move, to say the least.

The odd thing is that Bird’s piece really wasn’t that bad. ‘Joe Kinnear clocked on for his first shift at Newcastle yesterday…and had no first team squad to work with,’ he wrote. ‘Kinnear only has a few games to make an impact…Instead of holding an immediate inquest into a five-game losing streak and stamping his personality on the club, the first team had their feet up or were playing golf.’ The rest of the article was pretty much comprised of quotes from Kinnear (in which he promised to ‘educate’ the players, among other things), while the headline – ‘I’m Joe Kinnear…erm, there’s no one ‘ere’ was pretty tame by red top standards.

The Express might have riled him by referring to the former Wimbledon manager’s absent charges as ‘the lazy gang’, but surely even the most crotchety character can appreciate a solid pun. As an added flourish, Kinnear appeared not to have properly read the articles to which he objected, or at least the salient details of each piece had escaped him. He was basically a below-the-line commenter on an internet football article, made flesh.

So why did he do it? “At that point, the regime wanted someone to come out and have a blast at journalists,” says Bird. “Ashley had been given a kicking in the press, then Kinnear came in and they wanted him to go out and have a pop. That sort of thing can get the fans on side, so there was an element of the support that were pleased the press got a kicking.”

George Caulkin from the Times, also in the room that day, has another theory. “I think it was an attempt to impose his authority,” he says. “Maybe it was that sort of old-school thinking that I’m going to impose myself by giving them a bollocking, and they’d fall into line. But attempting to look for logic in a Joe Kinnear press conference – or anything to do with Joe Kinnear – proved to be utterly futile.”

Usually this sort of thing is kept quiet – after all, it’s considered poor form for journalists to ‘become the story’ and, with a few notable exceptions, they genuinely prefer to keep it that way. On this occasion, about halfway through Kinnear’s screed the adorably optimistic Newcastle press officer interjected to clarify that all this was, of course, off the record. “But we said ‘Hang on – is it off the record?’” says Caulkin, “and Joe said ‘I don’t f*cking care, write what you want.’ I said ‘So you’re happy for us to quote you calling us c*nts?” Clearly, he was.

To cap the whole surreal experience, there was a moment of impeccable comic timing at the end of the press conference. “Probably the funniest part was when someone said “OK, can we start talking about the game now?” says Caulkin. “There was this pause, then someone said ‘So…any knocks?’” Funnily enough, not many reports the following day concentrated on Newcastle’s fully-fit squad.

On the Friday the events of the day emerged. At Football365, an executive decision was made that nothing written in Mediawatch could be funnier, so the whole transcript was published instead. Kinnear was dubbed ‘JFK’. And Bird, the most identifiable target of Kinnear’s rant, was invited to speak on Radio Four. “John Humphreys had seen it and they got me on the Today programme. One minute they were reporting on the several trillion pound bank bailout, then they came to me to talk about sweary Joe Kinnear. It was quite a bizarre segue.”

It didn’t get a great deal better after that day. Every statement from Kinnear had to be double-checked for its veracity, and in a subsequent press conference he started singing a song Tottenham fans had about him in his playing days. And then there was the story about Nepal, who Kinnear had managed in the late 1980s. “I couldn’t get this cliched idea out of my head – ‘If he thought he had a mountain to climb when he was manager of Nepal…’ etc,” says Caulkin. “He told this story about the crown prince of Nepal, who had supposedly brought Kinnear over there, who had gone on this murderous rampage, killed his father and the rest of the royal family, and Joe had 24 hours to get out of the country. But when I looked into that it turned out to be 15 years later when Joe was at Luton.”

“I’d rather a manager came out and had a proper row with you rather than it building up and festering for six months,” says Bird. “I wouldn’t use that language or confront people like that if I was in a position of authority, but the fact that he did, and just wore his heart on his sleeve…I don’t mind that. It’s not nice, but we’re not softies – we can all cope with that.”

The following February, having actually achieved some semi-respectable results and with Newcastle in 13th place, it was announced Kinnear would have to undergo a heart bypass operation and first Chris Hughton, then Alan Shearer took control until the end of the season, which ended in relegation. Remarkably, in 2013, Kinnear was back as director of football, and continued to provide entertainment with his public pronouncements. But that’s a story for another day…