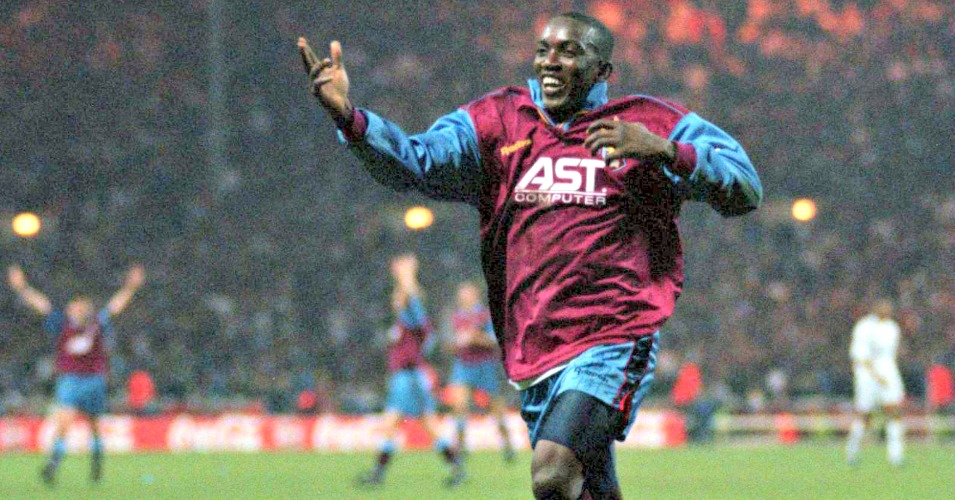 Transfer sagas are ten a penny these days. In the summer of 1998 they were a little rarer, or at least not played out in public quite so much, but Dwight Yorke’s proposed move from Aston Villa to Manchester United was a whopper. The World Cup briefly interjected, but the gossip columns were as preoccupied with the move as Alex Ferguson was with the player.

For a few years in the mid-90s, Ferguson developed something of a fascination with Yorke. It was mildly surprising that, as a man who had chased Gabriel Batistuta, Alan Shearer and Marcelo Salas, that Yorke was the striker he wanted. But wanted him he did, and had pushed hard to sign him in 1996, before eventually getting him two years later. “There was something about Yorke that always worried me when we played him,” Ferguson said. “There’s not many I can say that about in English football. I used to say to Pallister ‘watch him, and watch he doesn’t get in behind you, watch he doesn’t turn you.'”

Not that his opinion was universal. Ferguson wrote in his first autobiography that part of the reason Yorke’s transfer from Aston Villa dragged on was because the United board, and then assistant manager Brian Kidd, were “not sure he is the right man”. Still, make of their judgement what you will: Kidd apparently preferred John Hartson.

As was often the case though, Ferguson had spotted something others hadn’t. 52 goals, two league titles, one FA Cup and of course the treble in the following two seasons demonstrated why Ferguson was so keen to get Yorke. And, indeed, why Aston Villa and John Gregory were so keen to keep him. Gregory inherited the Yorke problem from previous Villa manager Brian Little, who had been forced to deny on a few occasions that anything was afoot. Gregory took over at Villa in February 1998, and by May he was publicly insisting that Yorke was going nowhere. “He has two years left on his contract,” Gregory said. “United may try but I am not interested.”

An old-school sort, Gregory wasn’t known for being sensitive. He famously questioned whether Stan Collymore could be depressed if he earned £20,000 a week, he suggested a decidedly muscular David Ginola was a little more ‘Rubenesque’ than a footballer might be (fact fans: Ginola sued, and chose Cherie Blair to represent him), and when tabloid pictures emerged of Mark Bosnich engaging in some accessory-related saucy horseplay, Gregory archly quipped to reporters: “We’ve been having contract talks. I’d like to tie him up for five years.”

So it was only a matter of time before he said something iffy in the Yorke saga. And really, in some respects you can’t blame him for snapping: it seems that every time someone put a microphone in front of him that summer, it was to ask about Yorke. “I think it is unfair…I have had no contact from United about Dwight but I genuinely feel they are trying to unsettle the player,” he said on June 11, already sounding exasperated. And he still had over two more months to go.

United made their interest in Yorke pretty clear, and made their first bid of £8million at the end of July, a bid that was given short shift. “Kevin Davies went to Blackburn for £7.5million from Southampton so I think Dwight is worth twice as much,” said Gregory. Villa offered Yorke a new deal worth a then-hefty £27,000 a week (more than he’d eventually earn at United), but he would not be persuaded. “Villa have offered me an excellent new contract,” Yorke said. “I want to see what happens with the Manchester United situation before making any decision.”

Negotiations continued, and the prospect of a player swap was mooted. So keen was Ferguson to get his man, that Andy Cole was the part-exchange most frequently mentioned. Gregory was initially unimpressed – “I am not interested in any Manchester United cast-offs. If they are not good enough to play for United then they are not good enough for Villa” – but not long afterwards a swap looked like the only way a deal would happen. “I asked about Beckham, Roy Keane and Nicky Butt. I told them that, if they want my best player, I’ll have one of theirs in exchange,” he said on August 1. “There has to be a certain player coming this way if Dwight is to go to United,” he said later, pre-empting passive-aggressive Facebook posts of 15 years hence. “If that doesn’t happen then there will be no deal.”

An interesting sub-plot to the whole thing was that United were negotiating on two fronts. Ferguson wanted to sign both Yorke and Patrick Kluivert, and while dealing with the Dutchman’s club was rather more straightforward than Yorke’s (Milan accepted a £9million bid without much fuss), they had the opposite problem with the player. Kluivert turned down the move, ostensibly to stay with Milan, then rumours circulated that he preferred Arsenal, before ultimately moving to Barcelona. Gregory, rather adorably, took this as a sign that United wouldn’t be so keen on Yorke. “With Kluivert not going to United I would have thought Alex Ferguson would be more concerned than ever about keeping Andy Cole,” he said, “and that makes any deal for Dwight Yorke dead in the water.” Bless him.

A couple of weeks later United made another bid for Yorke, of £10million, but that too was turned down and for a brief while that looked like the end of the matter. “United’s fax said this would be the last offer, and I am delighted,” celebrated Gregory on August 13. These were the days before the transfer window, but the deadline for registering players for the Champions League was looming, and that seemed to intensify matters rather.

Yorke took matters into his own hands, showing up at Doug Ellis’s house one morning to, in his own words, ‘plead…with tears in my eyes’ for Villa to let the move happen. He also told Gregory that his heart belonged to another (‘There was something about going to United that left me tingling inside’), which Gregory didn’t take at all well. “He won’t sign a new contract,” the manager pouted. “That’s it. I don’t think I can convince him to sign a new contract and we have 12 months to get a replacement for him.” Gregory picked Yorke for Villa’s season opener at Everton on August 15, but the forward was terrible: most observers said he wasn’t trying, and although Yorke later insisted that wasn’t the case, his mind was clearly at Old Trafford rather than Goodison. Some scorned, charming Villa fans reacted in the correct mature manner, by slashing the tyres on Yorke’s car.

Yorke showed up for training at Villa on August 20, thinking the deal was dead. But then, at the very last, his agent called to say United had finally stumped up the necessary, agreeing a fee that would eventually be worth £12.6million. “I did everything I could to keep him,” said Ellis. “I had five meetings with him and his adviser but in the end we had to bite the bullet.”

Gregory ran with the firearms theme, and came out with the words that would define this transfer, and perhaps his own career. “A couple of weeks ago Dwight openly state to me that he wanted to play for Manchester United and not Aston Villa. That really hurt me, and if I had had a gun I would have shot him.” Perspective, as ever.

A touch of amateur psychology would suggest that Gregory has issues with not being in control. Gregory’s words over that long, turgid summer suggested that he thought his statements could bring the whole thing to a close. “If Manchester United offer £25m I am at liberty to turn it down if I want,” he said at the end of July. Even at the last, he insisted that the whole thing was ultimately his decision. “Yorke made it public knowledge against that he no longer wanted to play for us,” he said upon the deal’s completion. “I took that on board and decided that in the best interests of everyone he should leave because I didn’t want anyone who was not totally committed to this club…I reluctantly let him go.” And what could put someone in greater control than having a gun with which to blow away a truculent underling?

Remarkably, after all that, Yorke did have a brief moment of doubt. ‘Wait a moment, do I really want to do this?’ I heard myself asking,’ he wrote in his autobiography, coyly titled ‘Born To Score.’ ‘Isn’t this (Villa) where I belong? Maybe I’d be better off staying?” When Yorke did arrive at United, he was welcomed by Ferguson, who told the rest of the squad to look out for him. He was then hit full in the face with a wave of the most potent banter, from Ryan Giggs. ‘I got my first taste of the legendary United dressing-room humour,’ wrote Yorke. ‘After he’d gone the lads start teasing me. ‘So are you Fergie’s son? Giggsy quips. ‘Dwight Ferguson is it?’ Pow! Right in there! No prisoners.

During his first training session, he received a few ‘testers’ from Roy Keane, including a pass hammered at his shins from close range. “Cantona used to kill those,” Keane said. “Welcome to United.” But that’s another story.