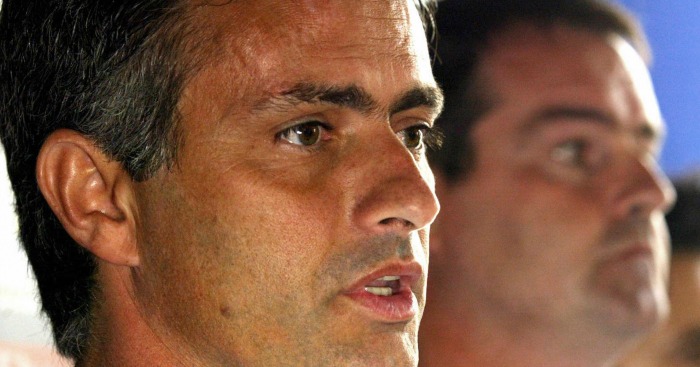 Whenever a new manager at a big club is announced to the press, the chances are some intrepid journalist will ask him what sort of ‘one’ he is. The question will usually start “Jose Mourinho called himself The Special One, what would you…” and the manager in question will either flat-bat the query or come up with something asinine in response, which will form a headline, part of any profile piece written about them and, in all probability, their obituary too.

Avram Grant went for ‘The Normal One’ when he replaced Mourinho – a song Jurgen Klopp covered at his Liverpool announcement, Andre Villas-Boas should probably have workshopped ‘The Group One’ before saying it out loud, while Mourinho himself played ball and dubbed himself ‘The Happy One’ for round two at Stamford Bridge. Some bright spark even tried it with Sam Allardyce at his England unveiling this week, and he replied with pleasing bluntness and in peak Big Sam fashion: “I don’t call myself anything. I’m Sam Allardyce.”

All of this is irritating for any number of reasons, not least that it’s profoundly tedious and the most naked attempt to extract a headline from a press conference. But mainly because Mourinho never actually said, “I am The Special One.”

In 2016, we’re all used to Jose Mourinho’s antics. We know pretty much what to expect from him now, and many-– if not most – of us have long since grown weary of his bullshit, including a good portion of the media. Back in 2004 though, most were in thrall, particularly the press and wider media, and with good reason too. Here was a young, handsome, charismatic and ostentatiously arrogant manager who didn’t seem to conform to any sort of rules in English football. He reminded many of Brian Clough, while we were already well aware of his spicy character after run-ins with Alex Ferguson and Martin O’Neill, following European games against Manchester United and Celtic, respectively. He was controversial, he was good, but most of all he was interesting.

His introductory press conference displayed all of these qualities, Mourinho sitting back and delivering quotable line after quotable line with dead-eyed certainty. He said things like “I am not from the bottle” and “we have a top manager” as if he was reading out a list of inarguable facts, rather than emptily bragging. If you didn’t understand his words and simply tried to work out what he was saying by his demeanour alone, you’d think he was a CEO delivering some disappointing financial results, rather than basically announcing himself as the reincarnation of Rinus Michels. (Actually Michels was still alive at that point, but you get the idea.) But it worked, he seduced everyone, and immediately files were opened marked “Jose Mourinho’s best quotes’.

And here’s the most famous one, as Mourinho actually said it:

“Please don’t say I’m arrogant, because what I say is true. I am European champion, so I’m not…one of…of the bottle. I’m a…I think I’m a special one.”

Interestingly enough, The Times didn’t include that line in their back-page report – a haughty broadsheet not going for the easy quote, you’d think, but neither did the Daily Express, the Daily Mirror or the Daily Star, while the Guardian online slightly misquoted him (“I am European champion and I am special”) and the BBC website didn’t include it in their main news story. At the time, while the ‘special one’ line did get a fair bit of play in the inside pages, much of the press chose to focus on other things such as him picking fights with other managers (he started early) and a potential squad clear-out, rather than the misquoted soundbite that would become repeated ad nauseam for the next decade and more.

And that’s the important bit. Well, in the wider scheme of things it’s obviously not that important, but the rogue insertion of a definite article has provided fodder for journalists ever since. Note that Mourinho actually said “a” special one rather than “the” special one: a small difference, but an important one.

It’s the difference between a queen (which could be a term used to describe any woman with whom you’re impressed) and the Queen (Liz). Mourinho said special one, not Special One. The definite article is important in these matters. “A” is a description while “the” is a title: this was Mourinho simply being arrogant, rather than bestowing a title upon himself. In fairness Mourinho hasn’t done much to dissuade anyone from the notion that’s what he did say, either through design, because it’s not that important really, or because it’s been repeated so often now that it has become the truth. Where it came from, who knows: most of the immediate reports seemed to report what he said accurately, but because of a small but curious/wilful misinterpretation of his words, the phrase has become part of English footballing language, and as far as the casual observer is concerned Mourinho crowned himself as the single, only, sitting upon high ‘Special One’.

It’s especially odd because the addition of ‘the’ enhances his arrogance, and if there’s one man in football whose self-worth doesn’t need to be exaggerated, it’s Mourinho. In another interview a few days later he said:

“If I wanted to have an easy job…I would have stayed at Porto – beautiful blue chair, the Uefa Champions League trophy, God, and after God, me.”

Exaggerating Mourinho’s arrogance is like saying Peter Crouch is 6’9 rather than a mere 6’7: he’s already pretty tall, there’s no need to ramp things up.

But still, 12 years on, and new managers are still asked to fill in the missing word in the sentence ‘I am the…one’. He’s got a lot to answer for, has Jose.