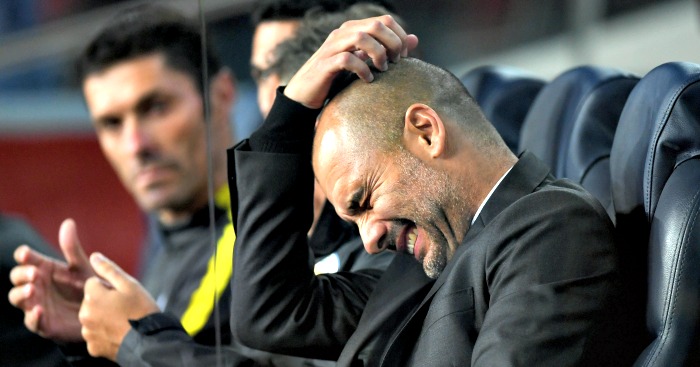 Pep Guardiola looks like he needs a hug. Or at least someone to persuade him that it’s early days and he hasn’t made a colossal mistake in going to Manchester City. Yet. The way he was slumped at Goodison Park, eyes staring at the ground blankly like a cross between a Vietnam vet and a kid who’d been caught nicking fivers from mum’s purse was pretty harrowing.

Guardiola’s problem is partly of his own making, but at the same time not his fault. His previous successes mean he’s been built up as this messiah of management, the finest coach in the world who will sweep into England and win everything. This of course loads remarkable amounts of pressure on him and provides ample opportunity for sceptics to jump up and down gleefully if he doesn’t win every game. “Ha!” they will cry, declaring him to be a fraud who can’t win anything without Messi or Lewandowski. This is the journey to sights like his Goodison thousand-yard stare.

Still, an unwanted reputation following him around is something Guardiola is used to. Just as the term ‘gegenpressing’ (read: closing down, but really fast) became associated with Jurgen Klopp, ‘tiki-taka’ was nailed to Guardiola fairly early in his career. There are all sorts of pseudy definitions of what that term actually means. Here’s one, from coach Jed Davies, who wrote a book called ‘Coaching the Tiki Taka Style of Play’: “My own view is that ‘tiki-taka’ is not just about possession, short passing or pressing but about controlling the game through understanding the spaces on a football field and understanding moments that occur in football.” And here’s one from another, rather more famous coach: “The intention is not to move the ball, rather to move the opposition.” That’s Guardiola, obviously.

But what most people understand tiki-taka as is passing, passing, passing. Lots of passing. Passing aplenty. Beaucoup de passing. Passapalooza. It’s a phrase that has entered the lexicon, a shorthand to describe a particular method of playing football, even if tiki-taka is basically just a reductive term for what a couple of teams were doing from around 2008-ish. Guardiola’s Barcelona and Vicente del Bosque’s Spain became the two teams most closely associated with both the style and the term, and with it the implication that this is the very definition of beautiful football, that this was the aesthete’s choice and moreover that this was also pure footballing entertainment. But not everyone thinks so. Not least Guardiola.

Marti Perarnau’s book ‘Pep Confidential’ follows Guardiola in his first season at Bayern Munich as he attempts to introduce his ideas to a new team and country. It’s an interesting read, even if it does carry the heavy implication that everything Guardiola does is extraordinary and revolutionary, not least his use of ‘rondos’ in training. These basically amount to keep-ball sessions to improve control, a method of coaching we suspect has been used before. But it’s a character study more than a book about football, and one of the other interesting threads running through it is Guardiola’s issues with the style of play many associate with him.

“I loathe all that passing for the sake of it, all that tiki-taka,” Guardiola says at one point. “It’s so much rubbish and has no purpose. You have to pass the ball with a clear intention, with the aim of making it into the opposition’s goal…Barça didn’t do tiki-taka! It’s completely made up! Don’t believe a word of it! In all team sports, the secret is to overload one side of the pitch so that the opponent must tilt its own defence to cope. You overload on one side and draw them in so that they leave the other side weak. And when we’ve done all that, we attack and score from the other side. That’s why you have to pass the ball, but only if you’re doing it with a clear intention.”

In another section of the book, he says: “I hate tiki-taka. I always will. I want nothing more to do with tiki-taka. Tiki-taka is a load of shit, a made-up term. It means passing the ball for the sake of passing, with no real aim and no aggression – nothing, nothing. I will not allow my brilliant players to fall for all that rubbish.”

And again: ‘When they land back in Munich the coach reads a quote from Lothar Matthaus in a newspaper: ‘Tiki-taka has reached Bavaria. Pep throws it in the bin.’ We could go on.

Vladimir Nabakov hated ‘Lolita’. Arthur Conan-Doyle was famously desperate to kill Sherlock Holmes. Morrissey didn’t like the Smiths’ eponymous debut album. Bruce Springsteen, remarkably, wasn’t keen on ‘Born To Run’. Guardiola wouldn’t be the first to dislike his defining work, or at least the interpretation or perception of his defining work. A famously intense man, Guardiola has always been at odds with his reputation. That’s what’s happening now, and that’s what happened with tiki-taka.