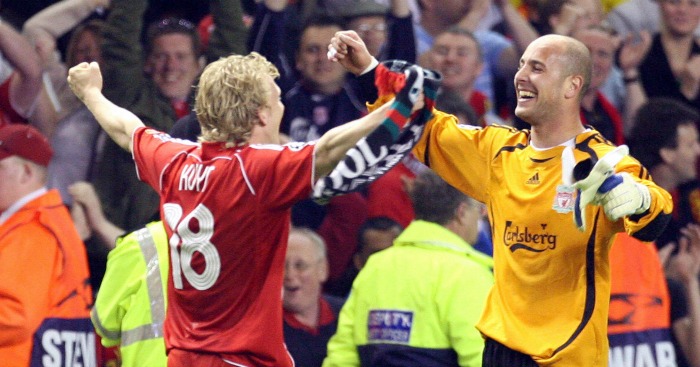 Hype works. We should all know this by now. People have built careers on hype, sold things on hype, won things on hype. The latest piece of evidence came on Monday night, as Manchester United faced Liverpool, a game which could not have been more flamboyantly promoted by Sky if they hired Liberace and gave him his own float to drive around Stanley Park all week.

At the same time, we know that these sort of games can quite frequently be fairly dull, and almost never live up to the hype, because how could they? We know before we start that this might be rubbish. And yet 3.1million people apparently tuned in on Monday, Sky’s best viewing figures for three years.

After becoming one of those 3.1million to settle down and watch one of the more spirit-crushing big encounters of recent times, and when trying to think of an adequate description of the tedium, Jorge Valdano’s assessment of a similar encounter sprang to mind.

About ten years ago, Liverpool v Chelsea seemed like it was a weekly event, like the Great British Bake Off but with more sweating. There was already a fair amount of contempt, but the frequent nature of the encounters meant familiarity quickly drifted into tedium. Or, as the hype machine would tell you, ‘intriguing tactical encounters’. Valdano, writing in Real Madrid propaganda pamphlet Marca, was not impressed with either the games or their perception.

Apart from questioning what sort of art galleries Jorge was visiting in Madrid (mate, you’ve got ‘Guernica’ there…), the point Valdano made was a relatively simple one, and was really just a more profane version of the one Public Enemy made 20 years earlier: don’t believe the hype. Sure, Chuck D wasn’t quite discussing the quality or otherwise of a Champions League semi-final (we assume), but the message was essentially the same: make your own mind up, and don’t judge based on what you’re told.

Rafa Benitez was, to say the least, not impressed. “Anyone who shows a lack of respect to this club, towards the fans and towards a stadium as sacred as Anfield by talking about shit on sticks shows that they know nothing about the history of this club,” said Benitez, who had been at Liverpool three years by that point and had most certainly already gone native. “I have known Jorge Valdano for more than 20 years ever since we were at Real Madrid at the same time. He is someone who I don’t think highly of as a professional. He would come out and give press conferences and hang medals on himself while the professionals with talent worked in the shadows.” Ooof.

As it happens, it turned out Valdano’s point became rather more, well, pointed, because of that old issue most journalists have to contend with: word count. “The article had the problem of length, right?” he explained to Marcela Mora y Araujo a couple of years later. “I had to write exactly 495 words and I had 600. I started trimming and ended up with ‘shit on a stick at Anfield could pass for a decent match’.” Ah, pith: so often the enemy of nuance.

But what’s interesting is the rest of Valdano’s article. His central criticism was that Benitez and Jose Mourinho had steered football in a direction where skill had made way for physicality, that being the best was no longer about technique but rather athleticism. ‘Chelsea and Liverpool are the clearest, most exaggerated example of the way football is going: very intense, very collective, very tactical, very physical, and very direct,’ he wrote. ‘But, a short pass? Noooo. A feint? Noooo. A change of pace? Noooo. A one-two? A nutmeg? A backheel? Don’t be ridiculous. None of that. The extreme control and seriousness with which both teams played the semi-final neutralised any creative licence, any moments of exquisite skill…

‘Such extreme intensity wipes away talent, even leaving a player of Joe Cole’s class disoriented. If football is going the way Chelsea and Liverpool are taking it, we had better be ready to wave goodbye to any expression of the cleverness and talent we have enjoyed for a century.’

And, well, broadly speaking he was right. The most lauded coaches in the world today – Mauricio Pochettino, Jurgen Klopp, Diego Simeone – have game plans based around physical attributes, largely high-pressing, relentless running. Of course none of them are so one-dimensional that ‘running around a lot’ is all they have going for them, but the game now is a version of what Valdano predicted. Even Pep Guardiola, usually portrayed as the aesthete’s aesthete, places almost as much emphasis on the physical aspects as the technical.

All of this isn’t exactly new: Terry Venables gave an interview while he was Barcelona manager in the mid-80s about closing down the opposition in their own half, to pressure them into making mistakes nearer their own goal – or what we now might call ‘gegenpressing’.

“I felt it was a betrayal to Liverpool’s history,” Valdano said later. “I remember a wonderful banner in the Liverpool stands from the days when TV was in black and white – it read: ‘For those of you watching on telly, Liverpool are the ones with the ball’. I used to support Liverpool just for that. For me, football has to do with a sense of adventure, with risk, and he who respects that makes me feel supportive of his team.”

This wasn’t a personal attack from Valdano, more an idealist’s view of what he considered football should be, of a sport heading down a route that he didn’t appreciate. But, also, he thought it was a rubbish game. Don’t believe the hype.