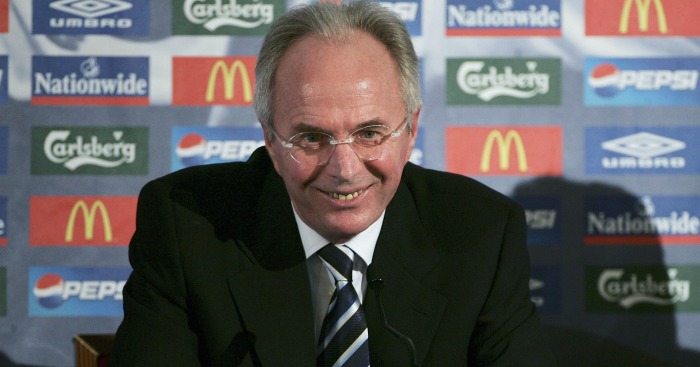 The latest in an excellent series on football quotes, their origins, meaning and context. This week it’s Sven Goran Eriksson and 10am champagne…

Back in January 2008, the Daily Star carried a picture of Sven Goran Eriksson in a Manchester hotel restaurant, with his arm around a young lady, looking like he was having a very pleasant evening. ‘It’s Sven Giggle Eriksson’ read the headline, ‘Laughing boss still a hit with the ladies.’ The article went on to nudge nudge, wink wink by commenting that the former England manager ‘put on an irresistible charm show’ and noting he ‘got carried away with one’ of the women in his presence and his hand ‘appeared to stray towards her bum.’

The problem being that the woman in question was his daughter, Lina. The subsequent apology, printed in a small column of an inside page (naturally) a few days later, was pretty funny. ‘We wrongly assumed that the lady was an admirer and suggested that he was fondling her,’ they wrote, clarifying that any physical contact between Sven and Lina was ‘a normal fatherly embrace.’ They apologised ‘for the embarrassment and distress caused by the publication of the photographs and incorrect assumptions made about them.’

This was obviously a reprehensible piece of journalism, drawing conclusions from a long-lens photograph with the imposition of some pre-conceived ideas of Sven, legendary swordsman. The thing is though, those preconceptions are so strong that they’re very easy to fall back upon; it’s very easy to think of Sven as a professional seducer first, a football manager second.

Which is why it’s so easy to believe the story in Dietmar Hamann’s book, ‘The Didi Man’, about what Sven said to him while on a post-season tour with Manchester City. Take it away, Didi:

‘One morning I was on a sun lounger by the pool when I saw Sven walking towards me carrying a silver tray with a bottle of champagne and two glasses on it. It was still only ten o’clock in the morning…Sven came over and put the champagne on the table next to me, then placed one glass in front of me and the other by his lounger. I looked up and said, ‘Boss, what are we celebrating?’…He turned to me and smiled that gentle smile of his and took on the air of a Buddhist philosopher as he said, ‘Life, Kaiser.’ Then after pausing for dramatic effect, ‘We are celebrating…life.’

‘Life, Kaiser. We are celebrating life.’ In some respects it’s difficult to explain exactly why this is so funny. There’s the inherent ridiculousness of anyone saying that, of course, but also the inclusion of Hamann’s nickname makes it even more so. Somehow ‘Life, Dietmar…’ would not have been quite so funny. Then there’s the confirmation, as if he thinks Hamann might not have heard his cod-philosophical maxim. And it’s also impossible to picture Sven wearing anything other than a silk robe and slippers, airily wandering around the poolside to sip bubbly with his bemused midfielder. This is cartoon Sven, the most perfect example of what everyone thinks of him, regardless of whether it’s true or not.

It’s also a man with a zen, c’est la vie attitude, the sort who is unconcerned about the difficulties of life, that he knows something will crop up and meanwhile he might as well just breathe the morning air deeply and enjoy things. It’s worth noting that, at the time of Sven and Didi’s poolside snifter, it was pretty clear that he was about to be sacked, but Eriksson still has a sense of calm that only a man who knows where his next lucrative pay-off is coming from can have.

The impression you always got with Eriksson is that he was a manager who didn’t actually do much managing, that he simply sat back with a cool air of detachment and more or less told the players to play where they usually do, and took things from there. There’s a lot to be said for a credo like that, steadfastly refusing to complicate anything, and it worked for a while. But he perhaps wasn’t exactly a football obsessive or workaholic, poring over DVDs and ProZone stats long after everyone else had gone home.

There was a vague sense that Sven had got into the football game by accident, a happy chancer who discovered a vague competence at a career that, pleasingly enough, was extremely well-paid and presented him with many ‘social opportunities’. This is all probably quite unfair and he was clearly doing something right for a little while at least. But the image that Eriksson always gave off was not of a proper football man, more that of a bon viveur. Not one who would get riotously drunk and be thrown out of China Whites, for his was a form of benign hedonism rather than hellraiser who would leave behind trashed hotel rooms and wounded feelings. Sophisticated, relaxed, with life’s priorities lined up straight and, to be frank, very European. He was a man who would, well, drink champagne by the poolside at 10am. Life, Kaiser, life.

That wasn’t all he said on the sun lounger, obviously. Hamann continued: ‘With a glass of champagne in hand, he stood and looked out towards the horizon. He took a deep breath, then he spoke in that higgledy-piggeldy Swedish accent. ‘You know Kaiser, I like this place. I think I will manager for another five years and come back here and live with two women. Yes. I think I need two beautiful women.’

This is where we get into the realms of parody. Two women. Two beautiful women. It’s the sort of thing a cartoon cad would say, the sort of cartoon cad that everyone thought Sven was, perhaps quite correctly. The idea of Sven, ladies man, does not seem to be a tabloid construct, because he happily yet quite vaguely discusses his adventures between the sheets in his autobiography. The names of various women are dropped casually, like he’s just discussing a mundane aspect of his life, as the rest of us might talk about a troublesome back problem or a mortgage.

‘I was not interested in a steady relationship,’ he writes of a woman called Malin. ‘It happened that I met other women, too.’ Of course you did, Sven. When he was manager there, Leicester fans used to have a song about Eriksson, to the tune of ‘La donna e mobile’, that went ‘Sven’s had more sex than you.’ He almost certainly has.

Perhaps this is just Sven playing up to it, giving the crowd what they want. Maybe he’s a man who is caught up in his own caricature, who’s playing the role of ‘Sven: lover’ rather than being himself, whoever and whatever that self is, but it certainly doesn’t come across that way. A psychologist would probably have a field day with Sven, but to all intents and purposes he seems to be exactly what you think he is.