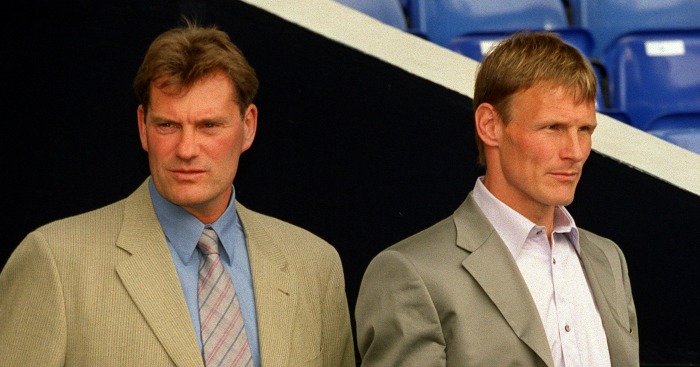 For much of the Quote Unquote series, we have written about famous words said by footballing people, and tried to offer a little context. Something about why the words were said, when they were said, and how they were said. Usually, people will remember what was said, but not why, so the idea of this is to take a slightly deeper look.

On this occasion though, we’re shining a light on something that might not be quite so widely known, and rather than attempt to offer extensive explanation or context, we are merely bringing attention to what we think is a choice piece of footballing verbiage. Enjoy.

Teddy Sheringham worked with a good few managers in his time. A couple of the absolute best, in fact. He has often spoken warmly of Brian Clough and is always good for an anecdote about perhaps the most anecdoted manager in history. He has told of what a formative influence George Graham was at Millwall. And of course he nominated Alex Ferguson as the best, as indeed he should. And then there’s Glenn Hoddle.

Do a quick Google search for ‘Teddy Sheringham Glenn Hoddle’, and you’ll get…mixed results. “The identity of the manager has always been crucial to me in all my moves,” Sheringham told the Daily Telegraph in 2005. “That was why I was happy to sign for Glenn Hoddle again at Spurs. I liked the way that he played football, I liked the fact that he was a Tottenham man and a former Spurs player and that everyone was rooting for him.” As Sheringham had played under Hoddle with England, a willingness to work with him again would suggest a reasonable relationship between the pair.

Dig a little deeper, and things get a little more arch. “I still think I have something to offer and I thought it was very important that I would be playing with somebody that I can communicate with,” said Sheringham in 2003, when he left Spurs (and Hoddle) to sign for Portsmouth, the implication being he felt he couldn’t communicate with Hoddle. But that’s just an implication, open to interpretation and not necessarily a definite statement.

Then you search a bit further and you find something a little more explicit. “Glenn had an air about him that he was too good for us and we didn’t match up to his standards,” Sheringham said in 2010. “I didn’t rate him as a manager. The way he spoke to us players wasn’t the right way to do it as far as a lot of us were concerned. I don’t think any player lived up to his expectations.”

Still, none of that quite lives up to what Sheringham said in a book by Joe Lovejoy, erstwhile journalist for the Sunday Times, the Independent and others, published in 2011, called ‘Glory, Goals and Greed: Twenty Years Of The Premier League’. There’s a theory that, if you want an interview with someone, don’t tell them you’re writing for a magazine or a newspaper, but tell them you’re writing a book. In general, people tend to be more forthcoming in such situations, either because they think a book sounds a bit more weighty and intellectual, or maybe because they think ‘author’ might be more trustworthy than ‘journalist’, or perhaps more likely that they think no bugger is going to read a book, so they might as well be…rather more candid. And that theory certainly shines through here.

The book is split into chapters offering tales on various aspects of the Premier League, with some interesting stuff about the birth of the division, the author’s own selection of 20 great matches, and some straight interviews. Sheringham’s is in the latter camp, and the whole chapter is basically given over to him, to tell the story of his life in the game. About halfway through he starts discussing Hoddle and…well, he says the following:

‘When I was a 14-year-old, playing for Tottenham Schoolboys, I used to get to those first team games early so that I could watch Hoddle warm up. He was so graceful. The ball would come over and he would catch it on his back, knock it up and volley it back to where it came from. Everything he did was so classy, I couldn’t wait to watch him play. Then when I met him man to man, it was “Oh my God, what a cunt’. I can’t believe this.”

That, as they say, escalated quickly.

‘As a man though, what a disappointment,’ Sheringham says, shaking his head at Hoddle’s titanic self-regard, and admitting that now he tells people his favourite player as a youth was Kenny Dalglish, not Hoddle. ‘Such arrogance, and what a show-off.’ He then embarks on a story to back up his claim, recalling a training session on the morning of England’s game against Argentina in the 1998 World Cup in which Hoddle was explaining a set-piece routine he wanted David Beckham and Paul Scholes to try.

‘Hoddle said “Right, from the free kicks I want Becks to roll it to Scholesy, who flicks it up for Becks to volley it over the defensive wall”….Becks rolled it back to Scholesy who went to flick it up and the ball went over the side of his foot because he wasn’t focused. There was a bit of banter, with the lads going, “Whoops Scholesy, fucking hell, what a rick.” Hoddle said, “Now come on, concentrate on this. We’re going to do this properly.” So the two lads went to do it again and it went wrong again. Hoddle picked up the ball and said, “You’re obviously not good enough to do that one. We’ll have to leave it out.”

‘All the lads thought, “We’re playing Argentina today and he’s just said that two of our key players aren’t good enough. Fucking hell, what a prick.” His attitude was “I could’ve done that, easy. I’d have dipped it into the top corner.” He didn’t risk showing us, though.’

So there we have it. We could think of this as a confirmation of things we already knew/suspected about Hoddle, that as a coach his central flaw was that he couldn’t quite get his head round mere footballers not being able to do what he could. We could treat it as an explanation for why Hoddle never quite lived up to his potential as a manager. We could muse that it’s an interesting example of how a player toes the line during his career, doesn’t upset too many people in the press, but eventually lets rip after retirement.

But, in the end, it’s just a fairly remarkable and pretty funny thing for a footballer to say about anyone, let along a former colleague. So let’s just enjoy it for that.

Big thanks to former F365er and all-round terrific egg Alex Hess for pointing us in the direction of this one.