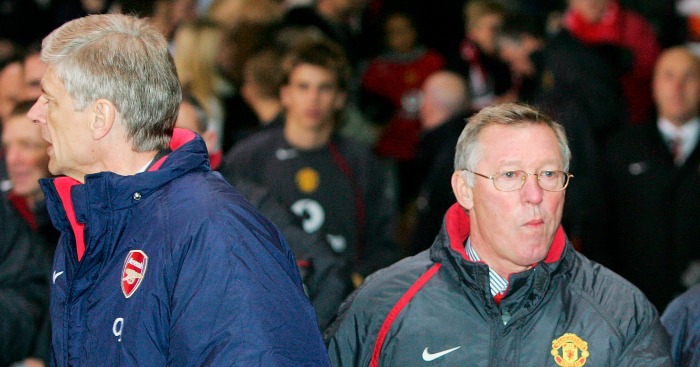 In last season’s Champions League final programme, Sir Alex Ferguson was quoted as saying some ostensibly nice things about Arsene Wenger. “He has been fantastic,” Ferguson said. “Now he gets a lot of criticism, but I admire that you’re not going to bend to the will of the critics. He stays with what he believes in. And I think people who do that are outstanding coaches. When you talk about consistency, Arsene’s never changed the way that his side has played.”

If those words were presented without context, with the names removed, with no prior knowledge about the recent history of football and the relationship between the two men, you would undoubtedly regard that as agenda-free praise, one person acknowledging the qualities of another. But when it comes to Ferguson and Wenger, it’s impossible not to have just a tiny bit of doubt, to think that Fergie’s mischievous side was poking out when he talks of Wenger “never changing”. Could he be hinting that a man who hasn’t won the league in 12 years should have changed? Is he actually having a dig at his old rival being set in his ways while dressing it up as praise?

It’s easy to over-think things when it comes to Ferguson, but these are two men who have been rivals since 1996, when this awkward-looking man in a bank clerk’s spectacles arrived in England, introducing things like ‘pasta’ and ‘not drinking 12 pints two days before a game’, and other such innovations. Perhaps he didn’t knock United off the perch they had bullied away from Liverpool, but he at least had them wobbling significantly. Ferguson dismissed Wenger’s credentials when he first arrived, Wenger would get annoyed by Ferguson’s abrasiveness and apparent hold over football in England. “What I don’t understand is that he does what he wants and you are all at his feet,” he once said.

In the latter years, when Ferguson believed he had neutered the threat of Wenger, he started to talk about him in an almost patronising, nearly sympathetic manner, as if he not only didn’t see him as a threat but felt rather sorry for his old rival. After the 8-2 in 2011, Ferguson made excuses for his humiliated opponent and later said he wanted United to stop scoring: the Govan equivalent of “stop…he’s already dead”.

Back in 2002, though, the rivalry was still fierce. In 2000/01 United won the title with embarrassing ease, sealing it halfway through April, finishing ten points clear and only that few because they, demob happy, lost the last three games. They then bought Juan Sebastian Veron and Ruud van Nistelrooy, two signings that worked with varying degrees of success, but at the time it looked almost like bullying, that the UN should be called in to intervene at this blatant unfairness.

And yet, despite an impressive post-Christmas recovery from a poor start, by March, United found themselves being overtaken by an astonishing juggernaut of an Arsenal team, who didn’t lose a game, only drew three after December 18 and won their last 13, even able to cope without Player of the Year Robert Pires, felled by a cruciate ligament injury. Wenger’s second great team was a glorious sight in full flow, arguably better that year than when they went undefeated two seasons later. They would go on to win the double, beating Chelsea in the FA Cup final and sealing the league in the most apt and humiliating style possible, beating United at Old Trafford, Sylvain Wiltord’s goal confirming a 1-0 win and an unassailable lead.

Not that Ferguson thought they were much good. Well, on the face of it he didn’t. Knowing that the title was basically in Arsenal’s bag, in the closing weeks of the season he went for the old ‘psyche ’em out’ approach, questioning their perceived over-confidence (“Much as I respect him, I ignore him,” was Wenger’s response to that one), and going for a reprise of the ‘Devon Loch’ tactic by saying “the title is now Arsenal’s to lose”. The remark that elicited a notorious response from Wenger, however, might not have been especially calculated, said as it was shortly after United were beaten by Bayer Leverkeusen in the Champions League semi-final, a defeat that denied him the chance of a final in Glasgow. “We’re as good as anyone,” said Ferguson. “We have played the best football in England, scored the most goals. From Christmas, we have been the best team in the country.” If that could be misinterpreted as anything but a dig at Arsenal, Ferguson later clarified: “They are scrappers who rely on belligerence. We are the better team.”

This was a theme around that time, too. Ferguson had suggested that United were the better team in that tie against Leverkeusen, and that the Germans were lucky to make it through. It was as if he couldn’t quite comprehend how and why his team, an already strong outfit augmented expensively, was not winning everything in sight.

Still, if the intent was to unsettle Wenger, it didn’t work. When Wenger is struggling, or is perceived to be under pressure, he shows it in rather clipped replies to questions, having the air of a man who would rather be doing anything but talk the media. But when he’s doing well, he’s relaxed, that little smile plays across his lips, and he’s capable of producing some terrific one-liners.

So when the press, in that vague tittle-tattle way, informed him of Ferguson’s opinions a couple of days before the FA Cup final and a week before the title-decider at Old Trafford, it told you plenty about his state of mind that Wenger actually laughed out loud. “What do you want me to say?” he chuckled, with the assurance of a man who not only knows he has an opponent beaten, but has him panicking too. “Everyone thinks he has the prettiest wife at home.”

At the time, some misinterpreted that as a rather personal dig at Ferguson’s wife, Cathy – and those some included Ferguson himself, who was supposedly furious. Wenger did apparently call to clarify things, but that did no good, even though the meaning and context should be obvious: everyone is biased, they all think theirs is the best. And Wenger had used the phrase before, referring to himself when asked whether Patrick Vieira was the best midfielder in the country. He did, but then everyone thinks they have the prettiest wife at home.

It could have been an insult, a put-down that implied Ferguson had lost either perspective or the plot, possibly both. Or it could have been a statement of simple fact, merely saying that Ferguson was defending his own, as any manager would. “Maybe he meant in the Champions League,” Wenger continued, almost trying to let Ferguson off the hook, but knowing full well he meant nothing of the sort. “In the European Cup, it’s not discussable, because they were the only one who were still in the Champions League in the semi-final. In the championship and FA Cup it was Arsenal.”

Job done, enough said, I’ll take my trophy in the drawing room, please. Over the course of their 17 years at each other’s throats, Ferguson obviously won the war, both psychologically and in the trophy cabinet. Yet in both those categories, Wenger won this battle, and handsomely.