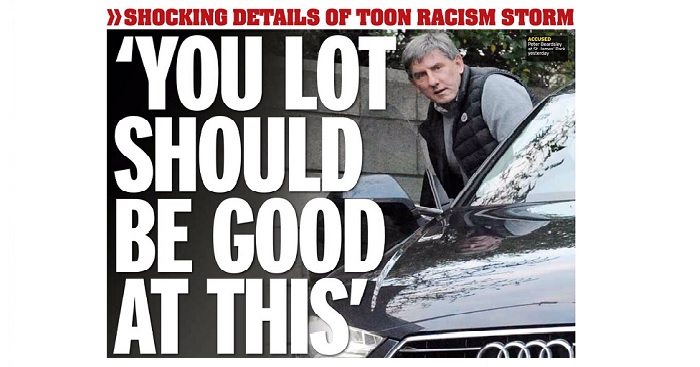 A proper Herbert
Newspaper journalists are often at pains to point out that there is a difference between the online click-bait versions of their namesakes and the actual printed newspapers that you can hold in your actual hands (yes, they still make those).

Show the below tweet to most Daily Mail sports journalists and they would wince as once again MailOnline judge how a young man spends his money. How dare a well-paid young man invest in property? Quite what a wealthy young man should spend his money on instead is unclear. Slippers perhaps?

‘The home is in Cheshire where footballers including Cristiano Ronaldo, Peter Crouch and Phil Jagielka have lived.’

How dare he live in the same county as Phil Jagielka? He hasn’t even played in a bloody Premier League game.

Man City footballer, 20, on £25,000 a week splashes out on £2.25million mansion despite having never started a Premier League match https://t.co/ZtNz9x5c55

At the other end of this Mail spectrum is Craig Hope, a north-east-based football reporter who has written extensively about Peter Beardsley and the allegations of racism and bullying made against him. He paints a picture of a bitter man who has belittled young players over a period of years, leading to a ‘climate of fear’ that forced young player Lewis Gibson to seek a move to Everton last summer. Hope’s work is even-handed and well-informed.

So it’s a shame for Hope and all the parents and young footballers to whom he has spoken throughout his investigations into this story that his colleague Ian Herbert has clambered in with all the tact of a rhinoceros and roughly half the knowledge. Only a man employed by the Mail could see a non-story about a young footballer owning a house and accusations of racism and bullying against a coach at another club and conflate the two into a column that edges dangerously close to victim-blaming.

Yes, he really does attempt a defence of Beardsley (described as “nasty and belittling” by one man in Hope’s piece, remember) based on the notion that young footballers these days are spoiled and over-paid. He starts with ‘The story of Manchester City’s young defender Tosin Adarabioyo encapsulates the way the world of academy football has changed’ and it gets worse…

A reminder, should it be required, that Beardsley watched a young African player struggle on some climbing equipment and allegedly said: “Why are you taking so long? Your lot should be good at this.”

‘But it does not need a forensic investigation to see the vast generational gulf between the young players of today and him.

‘In 1979, Beardsley left a job sweeping factory floors to join Carlisle United on £90 a week. He was infinitely more gifted than any of today’s youngsters, yet earned in a year back then what some of them will take home in a week.’

Well that’s alright then. How could a middle-aged man be expected to talk to young men who earn lots of money with any degree of respect at all?

Odd then that Hope also quotes a former coach saying: “He just does not see the good in people. It’s such a shame, he’s a club legend. Why does he have to behave like that? He’s not confrontational, he’s slippery. He’s great to your face, but behind your back he’ll be calling you. He’s always battering people.”

Was he just on a one-man mission to keep everybody’s feet on the ground, regardless of age and race?

Just when we thought Herbert could not get any worse – and he started in the gutter by bringing Adarabioyo into any discussion about allegations against Beardsley, he slips in this pearl…

‘In Newcastle, the Beardsley controversy is providing useful cover for the fact that the club are again doing minimal business in the transfer market.’

Yes, they really are so very lucky to have had one of their coaches accused of racism and bullying. Perhaps Arsenal should try the same.

So near yet so far
You may have noticed that on Wednesday night, Arsene Wenger sat in the press box at Chelsea for the Carabao Cup semi-final as he has been given a touchline ban. You may have noticed because the journalists all got terribly giddy and there was banter aplenty. Many (the Telegraph’s Jeremy Wilson, the Mail’s Sami Mokbel, The Sun’s Charlie Wyett and Guardian’s Barney Ronay among them) wrote pieces on this phenomena, almost as if anybody outside that press box was remotely interested.

But nobody went quite so far as the Mirror, who featured this as the top story – the *top story* – on their football homepage at 11am….

Insight
Here’s Jeremy Wilson in the Daily Telegraph: ‘Spending 90 minutes literally just a few feet from Wenger ensured a fascinating insight. Not for anything he said, but simply the magnified perspective provided by his body language. We hear so often of how football managers live every moment of a match that we become almost immune to the draining reality of that statement. Yet to see Wenger fidgeting with each pass, almost straining to make every tackle and, even surrounded by media, still letting out the occasional shout of encouragement or kick of frustration was to feel just how much it all means.’

Mediawatch humbly suggests that some journalists occasionally try sitting near football fans, because that’s pretty much what Wilson so painstakingly described in 738 words.

Alternatively, tunnel cam has ‘caught’ Antonio Conte peering past Sanchez onto the pitch; you can’t even see his sodding mouth.

Spot the difference
John Cross, Mirror football, January 10: ‘Arsenal boss Wenger is lining up Bordeaux’s £45m-rated Brazilian forward Malcom as a replacement for Alex Sanchez. The Gunners boss will refuse to sell the Chilean until a replacement is lined up though. Manchester City have held discussions with Arsenal over Sanchez but have been told they want to get a deal done before they will sanction any move.’

John Cross, Mirror football, January 11: ‘Arsene Wenger has targeted £45million-rated Brazilian star Malcom to replace Alexis Sanchez. Manchester City have held discussions with Arsenal over signing Sanchez this month, but have been told the Gunners want a replacement before they will sanction any move.’

The story is almost exactly the same and yet on Wednesday the headline told us that ‘Arsenal identify £45m-rated Malcom as Alexis Sanchez replacement after beginning talks with Bordeaux’; by Thursday Arsenal were ‘in Malcom transfer talks amid growing acceptance Manchester City will buy Alexis Sanchez this month’.

A morning in the life of Lucas Moura and Manchester United
Running a live blog on one football club is a difficult task. It’s a long old day talking about one club when very little is happening. But thankfully for the Manchester Evening News, Lucas Moura has been linked with Manchester United and Lucas Moura did not feature for PSG on Wednesday night. Which is, in 2018, A Story. Let’s follow it…

6.45am (too early to start a live blog, surely?): ‘He wasn’t in the PSG squad for the second successive match last night. That isn’t that significant, though. Lucas was in two of PSG’s six Champions League matchday squads, he’s made five Ligue 1 appearances and six overall this season.’

The message: This is not a story.

8.40am: ‘Moura speculation suggests United are being treated like suckers.’

The message: This is a kind of a story but Manchester United are just being used ‘to smoke out an actual bidder’.

Oh. We thought United weren’t really interested. But now he is a ‘gamble worth taking’. Well, a lot can change in an hour.

So does that mean he is no longer a ‘gamble worth taking’? 46 minutes is an awful long time in football.

And how have they ‘practically asked United to sign Moura’? Well, he ‘was left out of the Paris Saint-Germain squad for the second successive game on Wednesday night amid speculation Manchester United are interested in him’.

Wait a minute, we thought that wasn’t ‘significant’?

The mind of Samuel Luckhurst is a confusing place.