Home All The News Rafa ‘knew nothing’ as Real face expulsion 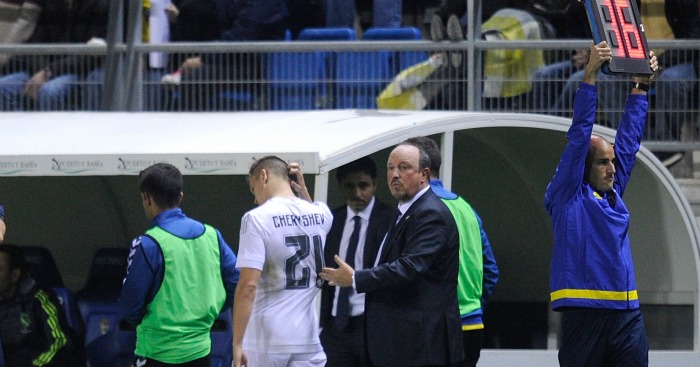 Rafael Benitez says Real Madrid were unaware Denis Cheryshev was ineligible to play during their 3-1 Copa del Rey victory over Cadiz in a blunder that could see them thrown out of the competition.

Cheryshev opened the scoring in the third minute of Real’s fourth-round first-leg tie at Estadio Ramon de Carranza, but the Russia international should not have been on the pitch after failing to serve a suspension for receiving three yellow cards with former club Villarreal last season.

While Cheryshev was withdrawn from the action moments after half-time, when Real had realised their error with head coach Benitez saying they wanted to “show good faith”, the Spanish giants still face a humiliating disqualification.

Last season Osasuna were kicked out of the tournament for playing an ineligible player while Benitez was in charge of Valencia when they were disqualified from the Copa del Rey having played too many non-EU players in a tie in 2001.

Benitez said in quotes on Real’s official website: “Clearly, the club did not know anything. We weren’t told by Villarreal or the Royal Spanish Federation (RFEF).

“We knew nothing and (when we found out), we have substituted the player to show good faith.”

Real director Emilio Butragueno said in quotes on Marca: “We knew nothing of the situation. We had no notification from the RFEF or Villarreal. Cheryshev, who was the player of Villarreal, he had no knowledge.

“We will await developments.”

Cadiz are set to act swiftly, with president Manuel Vizcaino announcing the club will report the Spanish giants to the RFEF.

“The circumstances require a quick decision and the Cadiz board has decided to report Madrid for fielding an ineligible player,” he said at a press conference in quotes published on AS.

The RFEF communique from March 6 confirming that Denis Cheryshev (Villarreal) has a 1 match #CopaDelRey sanction pic.twitter.com/zQrLVAIUB2