Yoshinori Muto has become the first Japanese player to join Newcastle after completing his move from Mainz. 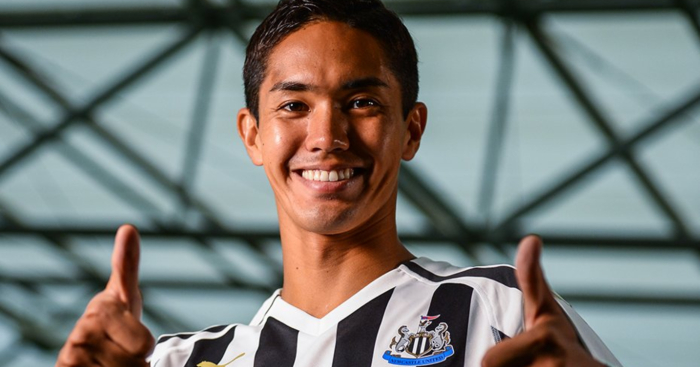 Newcastle have announced that Japan forward Yoshinori Muto has completed his move to the club from Mainz after being granted a work permit at a hearing on Thursday.

Muto, who underwent a medical and agreed personal terms with the Magpies last week, has joined on a four-year deal.

The 26-year-old told Newcastle’s official website: “I am very happy to be a player for Newcastle. I am really looking forward to playing in front of the fans.

“As the first Japanese Newcastle player, I am honoured to be a player for such a big club. I hope to achieve good results – that is what I am here to do. I would like to perform well and leave my name in Newcastle’s history.”

Newcastle boss Rafael Benitez said: “I am really pleased to have Yoshinori Muto with us. We were following him for quite a while. Hopefully he can bring us his energy and work-rate and help the team to improve and be better for the new season.”

Muto, who has scored 20 Bundesliga goals for Mainz over the past three seasons, is Newcastle’s fifth signing of the summer, with Martin Dubravka, Ki Sung-yueng and Fabian Schar having also joined on permanent deals, and Chelsea’s Kenedy starting a second loan spell with the club.

News of the Muto signing being finalised comes after Benitez was quoted by The Chronicle after Wednesday night’s 4-0 friendly loss at Braga that he was “really worried” about transfers.

And in his post-match press conference, he was quoted as saying: “It was a bad game. We did not do things the way we have to.

“Ten days before the start of the season now and this is a wake-up call. We have to realise we can’t make these mistakes.

“Things are not going well off the pitch and you can see a reflection of that on the pitch.”

When asked what he was referring to in terms of off-pitch matters, he said: “Everything.”

Benitez then said of Newcastle’s fans: “They have to be concerned. We are concerned.”

He also said he thought the club needed “three or four more players”.

He added: “We will try to change things in the next 10 days. We will try our very best.”

Deadline day is next Thursday, and Newcastle, who finished 10th in the Premier League last season, then begin their 2018-19 campaign two days later by hosting Tottenham.